Guide for Women in Mathematics: History, Scholarships, and Career Potential

The accomplishments of men have historically dominated the conversation in the field of mathematics. The disparity isn’t as pronounced as it once was, but the fact remains that even today, women in mathematics remain radically underrepresented.

The 2016 film “Hidden Figures” tells the story of the African American women whose math skills helped propel the U.S. into space in the 1960s. It says a lot that it took more than 50 years for their vital work to gain the widespread recognition it deserves.

It also speaks volumes that the authors chose the word “hidden” to describe the historic achievements of these remarkable mathematicians. According to “Why Are There So Few Women in Mathematics?,” a 2016 article in The Atlantic magazine, a big reason women remain largely on the periphery of mathematics in academia is a “corrosive” culture that favors male leadership.

This article examines the history of women in mathematics, with a deeper look at the obstacles that women have faced in the field over the centuries, as well as the progress that’s been made toward gender equity.

It also explores the wealth of scholarship and career opportunities available to women in mathematics. 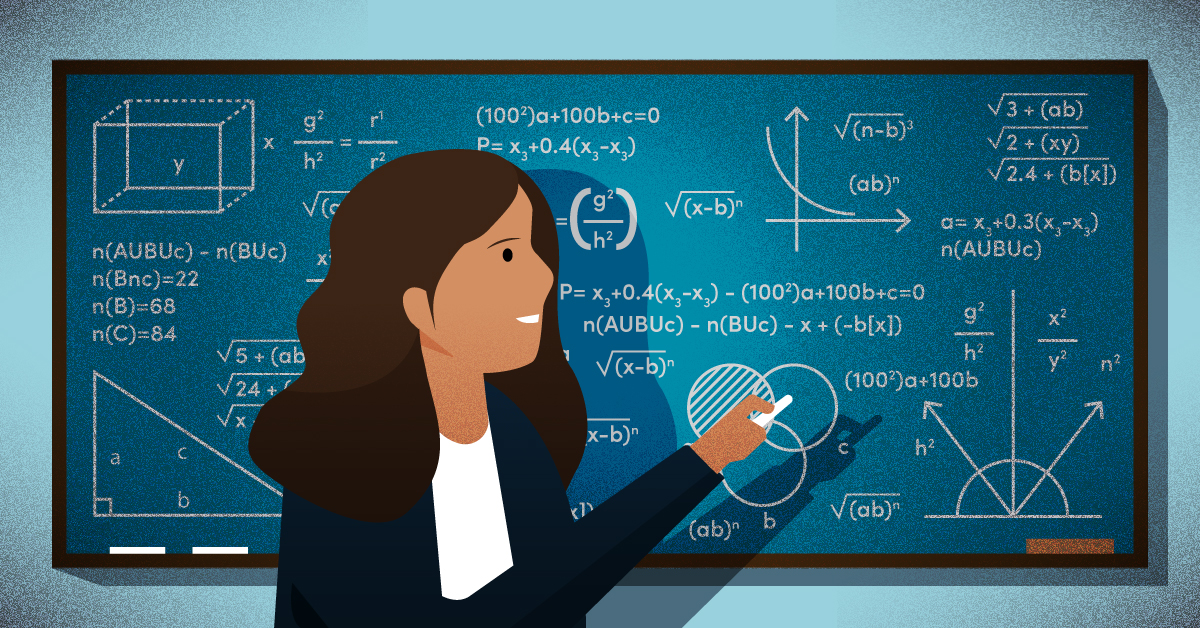 History of Women in Mathematics

The field of mathematics has historically been dominated by men. Their names are famous: Euclid, the founder of geometry; Pythagoras, whose theorem explains how to determine the area of a right triangle; Archimedes, who discovered pi.

Well-known scientists like Albert Einstein (time and relativity) and Alan Turing (computer science) carried the torch in the 20th century. Meanwhile, even though math as a field of study remained largely closed to women, many women made significant contributions to algebra, geometry, theoretical math, and other areas of study.

Despite this, the gender gap in math persists across the professional spectrum of education and science. According to a study by the National Science Foundation, women accounted for only 28.5% of doctorates awarded in mathematics in the U.S. in 2016. This was a 4% increase from 1997 (24.1%), but a 1% decrease from 2006 (29.6%).

Headway has been made toward gender equity in math, but there’s still work to do.

Hypatia of Alexandria: One of the First Female Mathematicians

One of the earliest known women to make a major contribution to the field of mathematics was the Greek philosopher and educator Hypatia of Alexandria. She was born around 350, was an avowed paganist, and was killed by rioting monks in 415 or 416.

While none of her work survived the burning of the Library of Alexandria, subsequent writings about her credited her or her Neoplatonic students with inventing vital measurement, observation, and navigation tools, such as the plane astrolabe, the graduated brass hydrometer, and the hydroscope.

According to the ThoughtCo encyclopedic entry on Hypatia of Alexandria, she’s believed to have lectured on and written about the motions of the planets, number theory, and conic sections.

She’s become a symbol of feminism. Her unsuccessful effort to preserve the knowledge contained in the ancient library was the subject of the 2009 movie “Agora,” starring British-born actor Rachel Weisz as Hypatia.

During the Renaissance and Age of Enlightenment, mathematical, scientific, and artistic advancements of men, such as Nicolaus Copernicus, Rene Descartes, Leonardo da Vinci, Gottfried Wilhelm Leibniz, and Sir Isaac Newton, grabbed the spotlight. As in most academic fields during that time, women had limited access to the tools of learning and research.

During the 1700s and 1800s, a number of women began to make their marks on the field of mathematics. Women published textbooks, conducted groundbreaking research, and translated ancient mathematical works from Latin and Greek.

Not until the 20th century would women be widely accepted as equals in the male-dominated field. In 2019, Karen Uhlenbeck was awarded one of math’s greatest honors, the Abel Prize; this was the first time that a woman had been given this honor. However, even as societal attitudes shifted in the direction of gender equity, many barriers remained for women in mathematics.

Women In Math: By the Numbers

Academic studies and statistical analyses of the gender inequity in math are clear: Female mathematicians remain at a distinct and systemic disadvantage.

According to salary information compiled by the National Science Foundation, female mathematical scientists earned $70,000, on average, in 2017. Men in the same field with comparable experience earned $81,000, meaning for every dollar earned by a male math scientist, a female math scientist earned 86 cents.

A 2018 survey by the American Mathematical Society found that only 31% of math positions in higher education were filled by women, including 30% of all tenure-track positions.

Another indication of the relative lack of agency of women in mathematics is the large gender gap among members of editorial boards of academic journals. According to “Why Are There So Few Women Mathematicians?,” mathematician Chad Topaz and computer scientist Shilad Sen discovered that only 9% of editorial board positions were held by women.

This relative lack of representation among the informational gatekeepers of the field is evidence of ongoing gender disparity in mathematics.

While their names may not be as famous as many of their historical male counterparts, women have left an indelible mark on the field of mathematics. Here’s a brief biographical overview of some of history’s most prominent women in math:

French-born mathematician Sophie Germain is known for her work in elasticity, number theory, and acoustics.

Sofia Kovalevskaya was a Russian-born mathematician and equal rights pioneer who expanded the general knowledge of partial differential equations and was the first European woman to earn a doctorate in mathematics. She also was the first woman to serve on the editorial board of a scientific journal and be appointed as a mathematics professor.

Scottish-born polymath Mary Somerville was acknowledged as one of the leading mathematical minds of her time. She was recognized for her work in calculus and astronomy. Somerville College at Oxford University in England is named for her.

English countess and mathematician Ada Lovelace contributed to the development of early algorithms that are considered to be among the first computer programs. Her analysis of the work compiled by contemporary mathematician Charles Babbage earned her enduring respect in the math world.

Julia Robinson is best known for her work to help solve “Hilbert’s 10th problem,” one of 23 puzzling academic challenges issued by the prominent mathematician David Hilbert in 1900. Robinson overcame a childhood marked by illness to become the first woman elected to the mathematics section of the National Academy of Sciences, as well as the first woman to serve as president of the American Mathematical Society.

Iranian-born Princeton and Stanford researcher Maryam Mirzakhani became the first — and thus far only — woman to be awarded the Fields Medal for mathematical excellence. She was recognized for her groundbreaking work in the fields of dynamics and geometry of Riemann surfaces and moduli spaces.

Karen Uhlenbeck, a University of Texas and Princeton professor, became the first woman to be awarded the Abel Prize for mathematics in 2019. She pioneered breakthroughs in the fields of geometric analysis and gauge theory and has spent her career working to improve the standing of women in mathematics.

Radia Perlman is an Internet Hall of Fame inductee and has been a professor at Harvard, the Massachusetts of Technology, and the University of Washington. She is best known for developing the “spanning tree” algorithm that made the internet scalable. 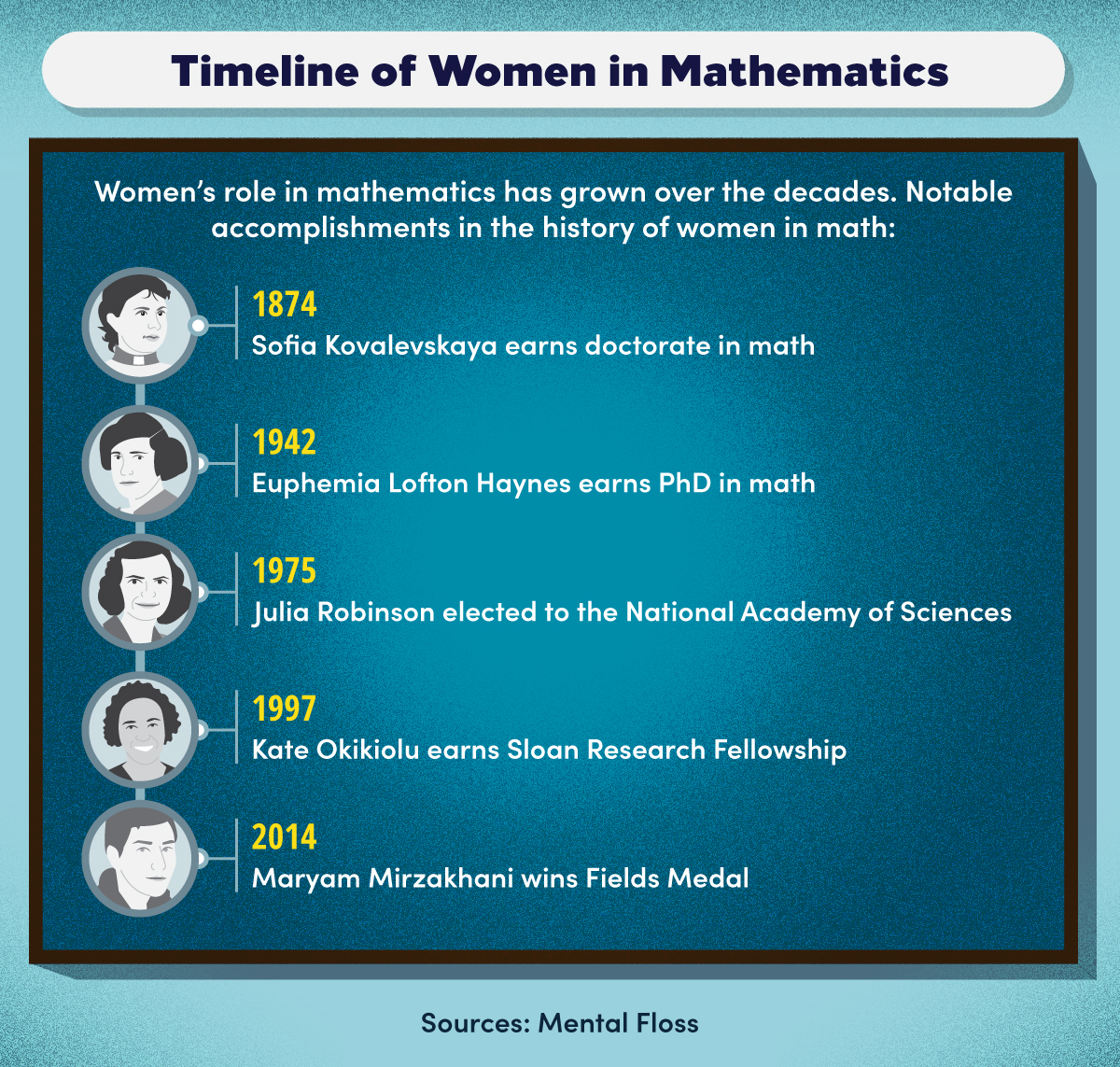 Women of Color in Mathematics

The sexism that historically prevented all women from achieving gender equity in mathematics has been compounded for women of color by systemic racial discrimination. In addition to having to overcome misogynistic policies, women of color in math must overcome racism.

According to the National Science Foundation’s most recent analysis of the science and engineering labor force, African Americans held 5.7% of jobs occupied by women. That was an increase of only 0.1% from 20 years earlier.

Dorothy Vaughan, a Kansas City, Missouri, native and mathematician, was NASA’s first African American manager. Her story was chronicled in the film “Hidden Figures,” along with those of Katherine Johnson and Mary Jackson.

West Virginia native and NASA mathematician Katherine Johnson performed trajectory analysis for the first American crewed spaceflight and contributed calculations to many other missions to space. She was awarded the Presidential Medal of Freedom in 2015.

Mary Jackson, a native of Hampton, Virginia, taught at the University of Maryland and served with Dorothy Vaughan and Katherine Johnson as an aeronautical engineer for NASA.

Scholarships for Women in Math

Women who wish to pursue mathematics as a field of study have many options to help pay for classes, including scholarships, grants, fellowships, and paid internships. Each of these types of financial assistance — including many scholarship programs specifically for women — are available in a number of categories for undergraduate, graduate, doctoral, postdoctoral, and academic tracks.

While most monetary awards are open to all students, regardless of gender, some are specifically created to encourage women to pursue careers in math. Here are a few examples of scholarships intended specifically for women in mathematics: 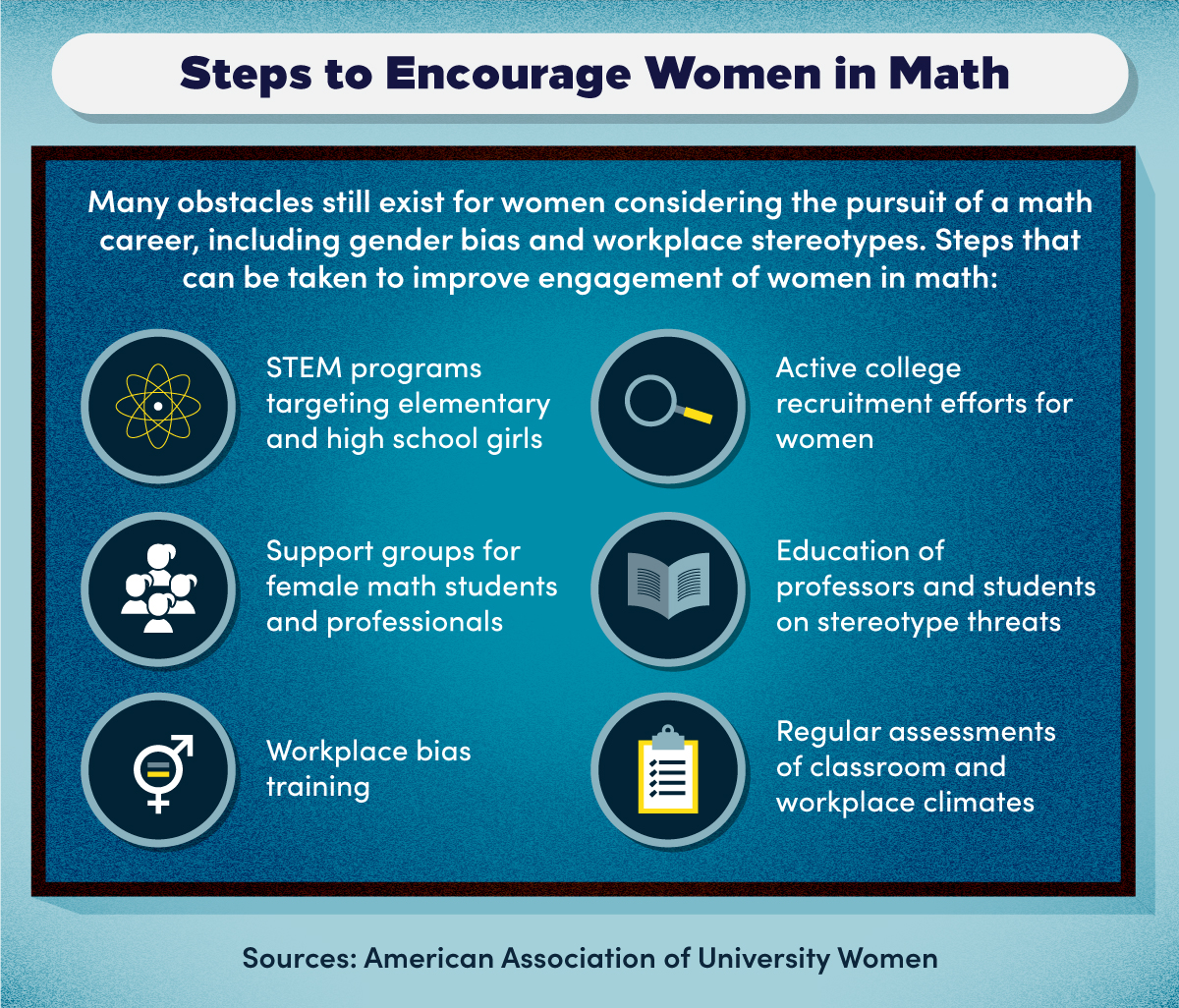 Increase of Women in Math and Science Careers

According to the U.S. Bureau of Labor Statistics (BLS), careers in mathematics are expected to grow by 26% between 2018 and 2028, much faster than the 7% average for all occupations. The median annual pay for math jobs in 2019 was $90,410, according to the BLS.

Here are a few examples of fast-growing professions that require extensive knowledge and skill in the field of mathematics:

Careers in mathematics typically require a background in advanced math concepts and theory, including calculus, statistics, and differential equations. According to the BLS, mathematicians in private industry often are required to hold a postgraduate degree or a doctorate, while those who work for the federal government usually require a bachelor’s degree in a math-related subject.

As companies seek to diversify their workforces, opportunities are beginning to open up for women in math. Greater recognition of the importance of representation for women and minorities in the workplace also has helped increase opportunities.

Resources for Women Looking for a Career in Mathematics

Suggested Readings
How to Become a Mathematician

How to Become a Statistical Consultant

What is a Degree in Math and Why is it Important?

Sources:
American Association of University Women, Why So Few? Women in Science, Technology, Engineering, and Mathematics

Association for Women in Math, About the AWM

The Atlantic, “Why Are There So Few Women Mathematicians?”

Jacksonville University, How Women are Working to Close the Gap in STEM