Get Program Details
What's your highest level of education?
Next Step We value your privacy. 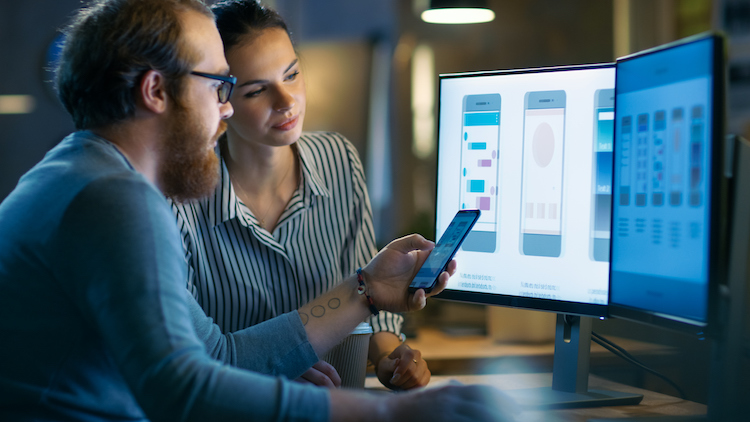 These days, computers and computer programs are nearly ubiquitous. This means that there is ample opportunity for software development careers in a variety of industries, including the following examples:

The world of data science is growing quickly. Data scientists process and analyze data, and they are then responsible for presenting their findings in an easily digestible fashion. This field requires data analytics skills, as well as technical skills in computer science, development, and coding. Data scientists make an average salary of $130,500 per year.

DevOps–a compound for “development” and “operations”–is a field that effectively combines software development with software operations. Those who specialize in DevOps are comfortable with code testing and deployment, as well as automation. DevOps engineers often work in teams to deploy code more frequently for their organizations. According to GlassDoor, the national average salary for DevOps engineers is $138,378.

Software consultants are senior developers. They create the architecture that software engineers follow and take a higher-level, more holistic approach to a project than a developer or engineer would. In addition to development, software consultants provide expert advice and often work in a client-facing role, collaborating with the client to determine how to create the required software.

Software consultants make a median salary of $72,588, according to PayScale.

Software development careers, perhaps not surprisingly, also include security-related roles. Security engineers, also known as information security analysts, are responsible for keeping an organization’s networks and computer systems safe. This field is in increasingly high demand, as both computers and the technology used to breach secure systems are becoming more advanced. A software development degree makes for a good foundation on which to build a career in this industry. The national average salary for a network security engineer is $82,768.

Those working in systems software are responsible for developing the systems that run computers and other devices, as well as the systems that control networks. These developers work on operating systems, as well as the user interfaces that allow users to interact with computers, cell phones, cars, and other devices. In 2016, the median annual wage for systems software developers was $106,860. The demand for applications and systems developers is projected to increase 24 percent between 2016 and 2026.

A UX designer is responsible for ensuring a product is both easily understood and user-friendly. In other words, this kind of designer works on user experience, or UX. UX professionals create prototypes, design interfaces, and improve products based on feedback. According to PayScale, UX designers earn an average annual salary of $73,800.

Video game developers often work together on the development team to create a game. This field requires both creativity and technical skills. A professional in this field can work on programming, testing, 3D modeling, and game design. Game developers make an average of $85,877 per year, according to Glassdoor.

Chron – How to Become a Security Engineer

How to Become an Applications Software Developer

Software jobs are on the rise. Find out more about how to become an applications software developer, salaries you could earn, and other key information.

Read More about How to Become an Applications Software Developer

How to Become a DevOps Engineer

Read More about How to Become a DevOps Engineer

How to Become a Network Security Engineer

Read More about How to Become a Network Security Engineer
Learn more about the online software development master's program.
Get Program Details