Get Program Details
What's your highest level of education?
Next Step We value your privacy.

When virtual reality (VR) first appeared 30 years ago, its capabilities fell vastly short of its sci-fi movie promise. But now, the technology has evolved to the point where VR software developers can create photorealistic virtual environments that people can navigate using a VR visor connected to two hand-held controllers. 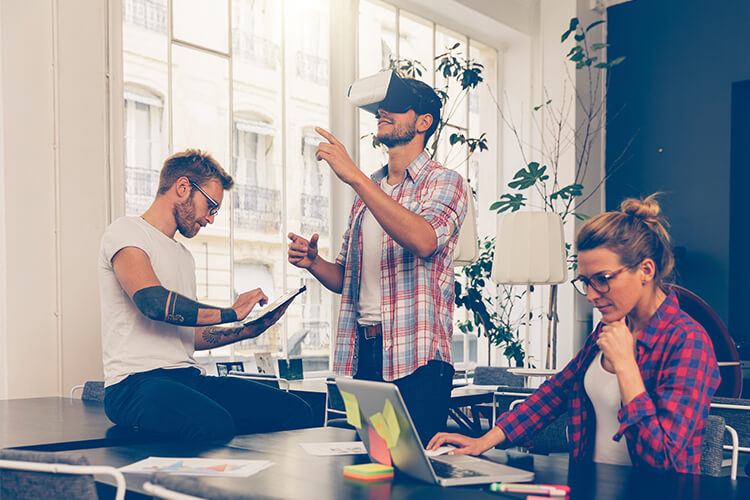 Where VR Software Development Is Headed

Thanks largely to the success of the augmented reality game Pokémon Go in 2016 and the rising popularity of smartphone headsets, VR and AR are now the biggest trends in the tech world. Since the release of Pokémon Go, an abundance of mobile games that feature AR functionality have emerged. Yet VR has seen more success so far, as the technology is further along in its development cycle. As the two technologies continue to evolve, developers can expect to work with the following features when creating new VR applications:

And VR won’t just be limited to smartphones, video games, and entertainment. Advanced VR training programs are springing up everywhere, especially in those industries in which VR can simulate expensive or dangerous training scenarios. According to the United Kingdom’s Virtual Reality Society, the military is already using virtual reality gear for training. Flight, battlefield, and medical simulators are common among technologically advanced armed forces.

As the VR industry grows, so does the need for qualified developers. Competent developers with a working knowledge of VR and AR will need to fill these vacancies.

“Gaining the knowledge you need to do work in VR and then demonstrating your skills with small self-driven projects is the best way to show a potential employer what you’re capable of doing,” VR developer Adrienne Hunter explains on augmented reality blog Virtual Reality Pop.

“There’s no need to work for anyone else for free — you can tailor your own learning experiences to the projects you want to work on.

“Hands-on experience building VR prototypes on your own (or with a group of people) might be the most time-consuming approach, but right now, it is also the fastest way for anyone in any discipline to get hired.”

Hunter also gives the following advice to students and working developers wishing to make themselves more marketable in the VR industry:

In other words, acquire some VR equipment and get familiar with it.

As an additional boost to their resumes, aspiring virtual reality software developers should consider learning proper storytelling and narrative design, as well as WebVR, and gain experience using VR equipment from the perspective of a consumer. Having these competencies can help them break into a career developing virtual reality video games.

The Jobs Are Out There

The applications for VR technology are limited only by imagination and a shortage of qualified developers. VR and AR can be used for everything from urban and environmental planning to mass casualty training, therapy, and gaming.

Oculus is pushing for a VR/AR social platform that provides “a sense of individual presence.” According to Oculus developer Mike Howard, “Being able to see, hear, and interact with other people provides an unlimited source of enjoyment and memorable experiences.”

The skills that developers need to achieve this goal include making apps easy to discover, connect to, and share. The experience itself also has to be engaging enough to bring people back for more.

There are approximately 1.3 million active software development jobs in the U.S., and the U.S. Bureau of Labor Statistics projects a 22 percent increase in the employment of software developers between 2019 and 2029. People who pursue an advanced education can now be primed to join the virtual reality software development field while it is still in upstart mode to help VR reach its full potential.

Virtual Reality Pop, “How to Get a Job in VR”