How to Become a Software Developer

Are you interested in learning more about how to become a software developer? The job provides the opportunity to shape the future in a way that few other professions can. All those millions of lines of code combine to influence the way people live, work, and play every day.

Becoming a software developer is not for everyone. Software developers must be ready to dedicate the rest of their careers to constant learning and relearning. They need to be passionate about devising bug-free code that not only runs without hiccups but also is so well-crafted that it serves as a template for future projects.

Last but not least, programmers have to be innately curious and analytical to overcome the challenges of the profession. Much of the work of a software developer entails long days of exacting and detailed work under tight deadlines. However, the rewards of the profession are as diverse as the type of projects programmers work on. Anyone with the itch for learning, a bachelor’s degree in management information systems (MIS), and practical coding skills can pursue a career that bestows many benefits: for programmers, for their employers and clients, and for industries of all types. 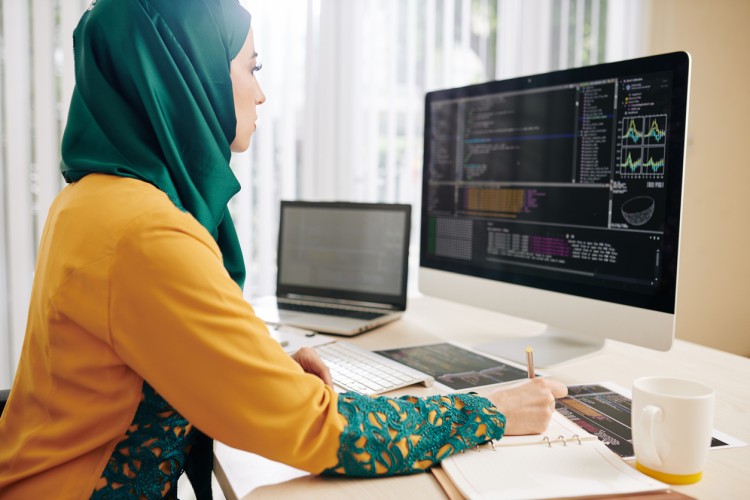 What Does a Software Developer Do?

The software developer job title covers as many specialties as there are platforms on which the programs run. For example, front-end developers create the user interface portion of programs, while back-end developers devise the code that collects, processes, analyzes, and responds to the data people enter into systems. However, distinctions between front-end and back-end development are blurring, particularly when it comes to creating software for mobile devices. Programmers who work on both the front-end and back-end components of applications, particularly those that run on smartphones, are called full-stack developers. In addition, a growing number of programmers focus exclusively on developing apps for mobile devices.

What distinguishes these and other software development categories are the coding tools the programmers use to create their applications. Mobile developers are most likely to use Java, Swift, and Objective-C, while front-end web developers craft their user interfaces with HTML, cascading style sheets (CSS), and JavaScript. Back-end developers are usually versed in several different languages, including Java, Python, Ruby, C#, C++, and PHP.

Full-stack developers often have some experience with a range of tools in these categories, as well as some knowledge of hardware infrastructure (servers, networks, and hosting platforms), various databases and application programming interfaces (APIs), security issues, and business processes.

Steps to Becoming a Software Developer

The key to enjoying a long and successful career as a software developer is to find the perfect combination of broad information technology education, focused training in specific coding tools and environments, and hands-on experience working with various types of code. However, as John Sonmez writes on Simple Programmer, “if you choose to become a software developer, you’ll be a student forever, and you’ll have to be constantly improving and keeping up with your education.”

Step 1: Earn a Bachelor’s in a Computer-Related Field

Sonmez and other professional programmers highlight the traditional starting point for prospective software developers: earning a bachelor’s degree in a computer-related field. On Coding Dojo, Stephen Sinco points out that while not all professional programmers possess a college degree, “a college degree certainly carries more weight” than experience gained by attending coding camps or through self-taught coding.

The U.S. Bureau of Labor Statistics (BLS) Occupational Outlook Handbook states that software developers typically have a bachelor’s degree in computer science or a related field. It’s generally agreed that earning a college degree prepares people seeking to enter the profession by giving them a solid foundation in data structures, algorithm design, and other essential topics.

Maryville University’s online bachelor’s degree in management information systems is one such degree. The program introduces students who are learning how to become software developers to various coding languages and methodologies while emphasizing the benefits those tools and techniques offer to businesses. Maryville University constantly updates the curriculum for the bachelor’s in MIS program to reflect current and future trends in IT. The degree program has a heavy business management component to help students prepare for the tactical while also being mindful of marketing, finance, and other business functions and objectives.

Business core courses in the MIS program include:

Hands-on programming experience is available via an internship elective.

A college degree in MIS or another computer field is only the first step for someone wondering how to become a software developer. The field is in a constant state of flux as new approaches to application development, new languages, and new tools become available. Organizations of all types are always looking for innovative ways to apply technology to solving business problems. They expect their software development teams to deliver applications that take advantage of the latest innovations.

TechRepublic’s Alison DeNisco Rayome writes that the 95 coding boot camps held in the U.S. in 2017 were completed by a total of nearly 23,000 people. Of the boot camp attendees, 75% had already earned a bachelor’s degree. After finishing the boot camp, 80% of participants report getting a full-time job in information technology, with an average salary increase of 50.5%, according to the Course Report Coding Bootcamp Alumni Outcome and Demographics Report. In addition, 80% of tech hiring managers in the U.S. report employing developers with coding boot camp experience, and 99.8% of these managers state they would hire another such applicant.

The key to getting hired as a software developer, according to TechRepublic’s DeNisco Rayome, is to present prospective employers with a portfolio of past coding work. Demonstrating competence in real-world projects and product development efforts is the best way to attract the attention of IT hiring managers. Working on such projects provides valuable experience in the many different programming languages and tools used in the course of developing applications and systems.

Programmers spend a great deal of time supplementing their education and developer skills by:

A great way for programmers to show potential employers what they are capable of is posting their coding creations online, which also invites constructive feedback from fellow software developers.

Why Become a Software Developer?

Salaries for software developers vary based on experience, job title, company, and geographic location. The following salaries are typical:

Money magazine’s claim in 2018 that software developer is the “hottest job in America” is supported by BLS figures that forecast a growth of 21% in the number of software developer jobs between 2018 and 2028. This is well above the 5% average growth rate predicted for all occupations. Application developers, in particular, will be in great demand; the BLS projects there will be 26% more jobs for app developers in the period.

In fact, the BLS forecast for software developer hiring may be too conservative considering the digital transformation now affecting businesses of all types and in all industries. CNBC reports there were 84,000 more job openings for all types of software developers in 2018 than in the previous year, far outpacing the next three fastest-growing professions: cybersecurity analyst (12,000 more jobs), cyber calamity forecaster (8,300 more jobs), and user interface designer (6,800 more jobs).

The potential for good pay and solid job prospects are two good reasons to pursue any career, but few software developers choose the profession solely because of its compensation and job security. Software developers need a great deal of curiosity to drive the lifelong learning that the job requires. They also need the ability to think analytically and solve problems creatively. Succeeding as a software developer requires combining these two traits with a solid educational foundation in computer theory and many hours spent transforming strings of code into useful applications.

Interested in learning how to become a software developer? Maryville University’s online bachelor’s degree in management information systems can help equip you with the knowledge and business mindset you need to thrive as an MIS professional. Your reward is the chance to contribute to the reinvention of businesses, organizations, government, and entire industries, helping them to succeed in the digital age.

Career Girls, “How to Become a Software Developer”

CNBC, “The Fastest-Growing Jobs of the Future, Including Cyber Calamity Forecaster, Career Counselor and Solar Engineer”

Money, “How Hard Is It to Become a Software Developer?”

Noteworthy, “Three Things I Wish I Knew Before Becoming a Software Developer”

TechRepublic, “How to Become a Developer: A Cheat Sheet”