Data has become a central, defining asset to businesses and governments today. Being able to transform data into readable, understandable insights is a much-needed skill. Mathematical-based professions, such as statisticians and mathematicians, are both in high demand in our interconnected world. Being able to turn a jumble of numbers and figures into readable information that a company can act upon is a useful skill. Even governments and their various departments use these professionals to help them understand the progress they have made toward achieving key data-driven and other goals. While these two professions may look similar, several differences exist concerning statistician vs. mathematician. 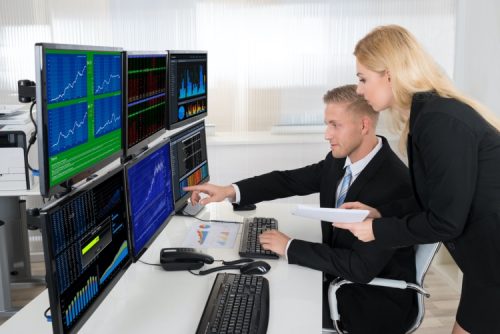 Mathematics is one of the oldest fields of human inquiry. It’s an abstract field that requires its practitioners to solve problems using calculations, logic, theorems, and a host of associated knowledge. Applied mathematics forms a significant part of many scientific fields. However, many mathematicians prefer to stick to the academic realm, solving problems that help expand the accumulated knowledge of the profession. Mathematicians continue to delve into the world of facts and figures, and academics in the field consistently develop new theorems or find innovative ways of testing old ones.

In industry, mathematicians are useful in several areas. A significant number of mathematicians work in government-funded organizations as well as in private enterprise. Mathematics is useful, for instance, to businesses that are leveraging such advanced tools as predictive analytics that enable real-world analytics models to be produced from existing raw data.

The U.S. Bureau of Labor Statistics (BLS) reports that the median salary for a mathematician is $104,870, with the top 10% of earners taking home a median of $160,550. Job opportunities for mathematicians are projected to grow 26% between 2018 and 2028, according to the BLS. This is much higher than the projected growth of all other U.S. jobs.

What Does a Statistician Do?

Statisticians in the business world have been a critical part of many companies’ attempts to understand their consumer base. Before the advent of electronic processing systems, statisticians offered the only way for a business to gain deep insight into its business efforts. Today, statisticians usually work alongside data scientists to help pinpoint essential metrics that are crucial to a company’s success. Additionally, statisticians aid in creating theoretical frameworks that data scientists can then implement through computer code.

Statisticians are influential in helping regular people understand numbers. For the non-specialist, terms such as average, mean, and median all seem the same. However, to a statistician, these terms can generate completely different results depending on what is being studied and analyzed.

A statistician’s utmost ability is to  take numbers that can be confusing for the average person and present them in an understandable form. For business executives in particular, this is especially useful since it enables them to visually ascertain the points of both success and failure in their operations and how to respond to them.

The profession is one of the fastest growing in the U.S. Taken as an individual field, statisticians are likely to see job growth of up to 31% between 2018 and 2028, according to the BLS. Statisticians can expect to earn a median salary of $92,600, with the most well paid 10% earning a median of $139,350 per year.

Similarities Between the Professions

In their most basic forms, both mathematicians and statisticians deal primarily with numbers. Both fields work within their field’s range of theorems to produce results. In some cases, non-specialists may even consider statisticians to be a subset of mathematicians. The work of these two professions displays several similarities, including a heavy dependence on theoretical research. Additionally, both mathematicians and statisticians tend to rely on previous groundwork to perform their calculations. They both utilize formulae or models to provide a real-world analog of their research.

The primary goals of both fields are also similar. Simplification is at the core. Both of the professions accomplish this by applying certain field-specific methodologies. Mathematicians may utilize formulae to transform complex readings into something simple to communicate. Similarly, statisticians can use data from thousands of individual sources and categories and transform them into visual representations.

How Do These Disciplines Differ?

The differences between a statistician vs. mathematician are easier to pinpoint. While mathematicians are usually concerned with the abstract measurement of values and creating results through functional processing, statisticians prefer a more involved methodology.

The numbers that represent data points within a statistical model can have different representations depending on what a statistician is looking at. Determining the real-world impact of those numbers is a core competency of a statistician. For a mathematician, whose work is mostly in the realm of the abstract, the concern is more about representing quantitative data in a form that the average non-specialist can understand.

Another significant difference between the professions is where their work is applied. Governmental agencies traditionally employ mathematicians in large numbers, with some individuals working in private companies, including those that receive some level of government funding. The main goal of mathematicians in these organizations is to quantify data in such a way as to enable key decision-makers to understand the results of math-driven initiatives and experiments.

Statisticians, on the other hand, are employed primarily by private businesses. Their goals are similar to mathematicians in that they create models that their employers can use to understand the numbers that surround and drive their businesses. Still, the methodology for creating those models differs significantly from their mathematician counterparts.

What Do Students Need to Know to Enter the Field?

Entering the fields of mathematics and statistics requires a particular set of skills and abilities that must be practiced and exercised consistently. Maryville University’s master’s in data science provides several fields of training that would benefit a graduate entering either of these professions.

If you enjoy exploring the area of mathematics or statistics as a professional and are looking to become a leader in the field, Maryville University’s online master’s in data science dynamic program has all the tools you need to succeed. You will get a chance to learn the most in-demand skills from partners and employers that use data analytics across industries. To learn more about the program, visit our website and take the first step toward a better tomorrow.

Recommended Reading:
Why Are Data Scientists in High Demand?

The Future of Engineering: Staying in Step with Technology

Quartz, Statistician Is One of the Fastest-Growing Jobs For the Future