In a 2015 Pew Research survey, one in three parents expressed concerns over their children’s use of the internet, social media, and cellphones. Despite a generally held belief that kids are comfortable with social media and surfing the web, they are young and still learning. Stepping in and teaching kids how to safely navigate the web may not only address concerns, but also deter risky or inappropriate behavior. 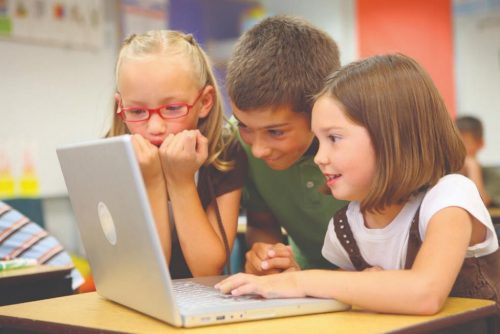 While the way a parent monitors their child’s social media activity is ultimately up to them, there are a few suggestions and pieces of information that can go along way. Below is what every parent should know about social media and a comprehensive guide to online safety for kids:

There are many benefits to social media for children and teens. Here are a few to keep in mind:

Connecting with Friends and Family

Social media is an excellent way to keep in contact with friends and family, especially those who live far away. With the ability to add friends, share what’s going on in your life, and send private messages, keeping up with friends and family is easy. The accessibility granted by social networks such as Facebook can help promote family connectedness and encourage socialization.

With an abundance of people using social media, there is no lack of diversity when it comes to interests and hobbies. A child who may otherwise feel excluded from their school’s typical clubs and activities may find it easier to meet people who share similar interests online. Finding these people who understand and encourage their interests could help foster a future career path. A teenager, for instance, who enjoys playing video games may decide to pursue a career in game design or graphic design. Encouragement from like-minded peers aids in a child’s development, whether on or offline.

Getting Involved in Activism or Charities

Students have been demonstrating the potential of social media. Recent protests against climate change and gun violence, for instance, show social media’s ability to quickly and efficiently disseminate information and mobilize people. Hundreds to thousands of students took part in these protests both nationally and internationally.

The quick spread of information on social media has also contributed to an increase in awareness and donations for conditions such as amyotrophic lateral sclerosis (ALS). Despite many criticisms of the ALS “ice bucket challenge,” the influx of donations helped fund a scientific breakthrough. Social media offers youths an opportunity to get involved and a platform to share their voices and create change.

Through platforms like Wattpad and Commaful, aspiring writers, children and teens included, can share their stories or ideas as well as receive feedback. Other platforms such as SoundCloud and Bandcamp give an opportunity to share and discover new music. Platforms like these encourage and enhance creativity among youths.

Marginalized children and teens may find a sanctuary on social media, helping them to navigate self-expression and identity. LGBTQ teens and teens suffering from mental health issues may feel more comfortable expressing themselves on social media than in person, especially those living in less-accepting communities. The support and self-awareness fostered by these kinds of online communities can aid in the development and mental health of youths.

Connecting with Educators and Other Students

Dangers of Social Media for Youths

Despite all the benefits of social media, parents should be aware of the potential downsides. Not taking precautions on social media networks can be dangerous and pose real threats to your children. Below are a few downsides to be wary of:

Cyberbullying is a serious issue that can have a lasting impact on adolescents. Moreover, it can be difficult to escape and prevent given the ability to access social media 24 hours a day, seven days a week. Cyberbullying that targets a person’s race, ethnicity, gender, sexuality, religion, or disability may constitute discrimination in certain jurisdictions and could eventually involve law enforcement.

Fear of Missing Out (FOMO)

FOMO, or fear of missing out, is a relatively new term depicting the feeling of anxiety associated with the perception that others are having more fun or living better lives than you. Social media sites exacerbate feelings of FOMO by showcasing only the positive aspects of a person’s life. This skewed perception of reality can cause self-esteem and self-image issues among youths as it creates a culture of comparison.

All kinds of dangers exist on the internet, but online predators are potentially the biggest threat to your child’s safety. Blending in with the crowd, sexual and other predators use social media sites to stalk and prey upon children’s innocence without easily being caught. Predators may use attention, affection, kindness, and even gifts to persuade a vulnerable child into sexual or other inappropriate activities.

Apart from sexual predators, children may be manipulated into sharing confidential information or downloading malware through phishing or smishing (SMS phishing) scams.

Do the Benefits Outweigh the Downsides?

Sentiment about social media and the internet is varied. While some believe its evolution has vastly benefited the world, others see primarily the risks and disadvantages. Debate over the subjective value of social media and the internet, however, has bolstered psychological and sociological research. Many universities now feature courses and enable students to perform research on the effects of social media through degree programs in psychology or sociology. The more studies that are performed, the closer we’ll get to understanding if the benefits outweigh the downsides, or vice versa.

When used conscientiously, social media opens up an array of benefits to youths. However, with every benefit comes a downside. By creating conversations and honoring general rules, parents can guide their children down a road of healthy internet usage. While determining what social media sites are appropriate for a child is ultimately up to the discretion of the parents, below are a few general guidelines by age:

While children ages 2-4 are unlikely to be secretly hiding a social media account from you, there are apps you may let them use that cause more harm than initially suspected. As previously mentioned, children’s apps are often subject to age-inappropriate ads. Due to this, children may be exposed to content you don’t want them to see.

Below are a few apps for 2- to 4-year-olds with zero in-game ads:

When it comes to TV, parents should watch with their children and limit their exposure to an hour a day. They should also consider teaching children how to properly use smartphones and tablets while they’re young to instill healthy social media habits.

The same goes for 5- to 7-year-olds when watching TV; watch with them and limit their exposure. In addition, make an effort to point out anything you find wrong with the program. For example, if the show is holding unrealistic expectations, such as every family having a big home and a pool, point out how it is OK not to have those things. This will encourage children to become active consumers of media, rather than passive.

At the ages of 8-9, children are deeply curious and may show interest in going online. Some common online uses include visiting virtual worlds or playing online games. However, children in this age range lack the critical thinking skills needed to make good choices on the web. At this age, parents monitoring social media and internet usage may be advisable.

Children ages 10-12 may begin wanting a social media account. It’s important that you make that choice together and instruct them through the process of creating an account. Like with 8- to 9-year-olds, monitoring social media accounts for 10- to 12-year-olds may be advisable. Children these ages may also begin wanting to make YouTube videos or become interested in gaming.

When deciding whether or not to allow your child to have a social media account, consider the age restrictions set by individual social media sites. Thirteen is the age requirement to sign up for many social media sites. However, children often work their way around the system, creating accounts with fake birth dates or a parent’s email address. Below are a few social media networks for which you must be 13 to join:

Parents with children ages 13-17 should foster healthy conversations about social media and be transparent in their monitoring. If you’re a little behind when it comes to all things tech, let your child explain how social media works to you. When your child feels as though they are in charge, they are more likely to open up about their own social media usage. This is a good time to ask questions and inform them of safe social media practices.

At this age, a majority of teens are aware of the overuse of cellphones and social media with 54% and 41%, respectively, saying they spend too much time on their devices. An even larger 60% of teens say that internet consumption as a whole is “a major problem” facing people their age.

The more you teach your child how to safely use social media, the better off they will be. The following are general guidelines for social media safety:

How Much Social Media Use Is Too Much?

The American Academy of Pediatrics recommends that parents place limits on social media and internet usage. Since a quantifiable number of hours is difficult to determine, the academy instead monitors whether or not social media usage is disrupting sleep, homework, or face-to-face communication, among other day-to-day activities. To avoid overusing social media, the academy recommends designating media-free times and setting limits on the type and hours spent using devices.