Whether a child’s personality traits and behavioral tendencies are the sole result of heredity or a consequence of their upbringing is an age-old debate. Much of the controversy in nature vs. nurture child development is the result of a misunderstanding about genetics: the mistaken belief that fate and genetics are synonymous. 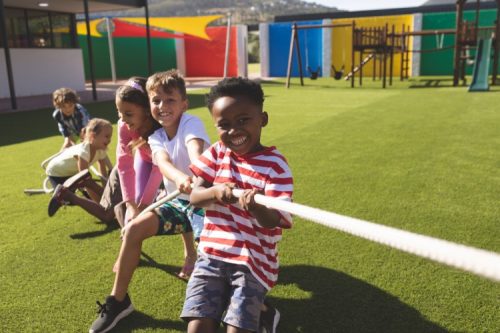 In fact, children’s genetic makeup is determined in many ways by their own experiences in their environment. The burgeoning field of epigenetics studies the effect of children’s early experiences on the chemical marks that accumulate in DNA and determine how much of a specific gene will be expressed, as the child development site First Five Years explains. All of these marks combined make up the epigenome; epigenetics is the study of these marks and their impact on children and adults.

Epigenetics and related fields in child development promise to give parents and educators new insights into how and why certain genes are expressed and others aren’t. Degree programs such as Maryville University’s online Bachelor of Arts in Human Development and Family Studies explore these areas to prepare students for careers that help families overcome challenges in their lives.

In the nature vs. nurture debate, “nature” is defined as all genes and hereditary factors that contribute to a person’s unique physical appearance, personality, and physiology. “Nurture” is defined as the many environmental variables that affect a person, including their experiences in early childhood, family and social relationships, culture, and community.

Both nature and nurture are linked to the philosophical concepts of empiricism and rationalism.

Most researchers in child development are more interested in how nature and nurture interact than in determining which of the two may predominate. For example, Simply Psychology places various approaches to psychology on a continuum:

Between these two extremes are a number of fields that focus on the interplay of nature and nurture in child development. Among these are behavioral genetics, which studies the genetic impact on variations in behavior, and polygenic inheritance, which looks at the effect that large groups of genes collectively have on a person’s behavior.

As researchers delve deeper into nature vs. nurture child development, they find that many aspects of development that were once thought to be determined by a child’s environment also have a genetic component, whereas others that were believed to be controlled solely by heredity are greatly influenced by external factors.

Today’s Parent explains that many past studies on the effect of a child’s experiences and environment are flawed because it’s impossible for researchers to effectively control for genetics. Conversely, studies that claim parenting has no impact on a child’s development ignore the vital role that parents play in encouraging the best attributes and behaviors in their children — and discouraging harmful or negative behaviors.

Genes determine certain human characteristics, such as eye and hair color and the incidence of genetic diseases. However, most human traits, including life expectancy, height, and weight, have both an environmental and genetic component. For example, social learning theory states that children learn by observing the behavior of others, so parenting styles and the child’s learned experiences determine whether they behave politely or aggressively in specific situations.

By contrast, learning’s genetic component encompasses the biological foundation of cognitive processes, as explained in Frontiers in Psychology. Genetic and epigenetic contributions to the learning process are inheritable and interact with behavioral learning such as study habits and the availability of educational resources.

Two recent studies illustrate the important role of epigenetics in a child’s development. Researchers at the University of British Columbia, UCLA, and British Columbia Children’s Hospital discovered a genetic marker in a child’s DNA that serves as a chemical “clock” to indicate the child’s biological age, as reported in Science Daily.

In a separate study reported in Psychology Today, researchers determined that toxin-related epigenetic changes, such as those caused by inhaling cigarette smoke, can be passed from parent to child genetically. The smoke triggers the expression of cancer-causing genes or suppresses the expression of those that protect against cancer. Children can inherit an epigenetic alteration from a parent.

Nature vs. Nurture: How Both Contribute to Child Development

The field of behavioral genetics studies how nature and nurture combine to affect a child’s development. It states that while genetics have a greater overall impact on a person’s makeup than their family environment does, most of an individual’s behavioral traits cannot be traced to specific genes or family characteristics. Instead, each human behavioral trait is associated with a great number of genetic variants, each of which contributes a very small amount to the expression of the trait.

Within the complex relationship between a child’s genetic makeup and learned experiences, distinctions can be drawn between the human traits that children are born with and those that result from their environment. The differences are evident in activities such as sleeping, crying, eating, socializing, and moving, all of which have clear nature and nurture components, as Firstcry Parenting explains.

A study of fraternal and identical twins found that babies’ sleeping patterns are determined primarily by genetics. Similarly, 60% of a baby’s temperament is set by their genetic makeup; whether they are sociable or shy is also primarily driven by genes. Also controlled primarily by heredity are the foods a baby prefers and whether the baby is active or sedentary.

While genetics are key drivers of these and other aspects of a child’s development, that development is also influenced by what babies experience. For example, babies with poor sleep patterns can benefit from being exposed to sunlight during the day and by parents establishing a bedtime routine that induces better sleep. Whether a baby is easy to calm and soothe when crying is determined by genes, but swaddling, rocking, swaying, and other activities help overcome this genetic predisposition.

Biological psychology examines thoughts, feelings, and behaviors from a physiological perspective, as Verywell Mind describes. The field studies how a person’s brain, nervous system, hormones, and other physical features affect behavior. It also studies the mechanisms of inheritance via genes on the behavioral likeness of identical twins, for example.

Conversely, behaviorism (also called behavioral psychology) considers how interaction with the environment can condition behavior. This field considers only observable behavior, believing that moods, cognition, and emotions are too subjective to be measurable. Types of conditioning include classical conditioning, which pairs a neutral stimulus with a naturally occurring stimulus until each evokes the same response, and operant or instrumental conditioning, which uses reinforcements and punishments to evoke the desired behavior.

While approaches to child development that emphasize nature over nurture may appear to be more grounded in science than in behavior modification, both nature and nurture have scientific foundations that are paired with environmental controls. In general, nature looks at the impact of such physical approaches as neurotransmitters and genome sequencing on child development, while nurture focuses on aspects such as peer pressure and social influences.

Studying the Relationships and Experiences That Shape Children and Families

Learn more about how Maryville provides students with the flexibility, affordability, and personalized coursework to begin pursuing a career serving families in need.

What Is Family Life Education?

How to Become a Child Life Specialist

What Do Community Health Workers Do?

Fatherly, “What Happens When You Tell Kids They’re Just Like Dad”

Firstcry Parenting, “What Is the Impact of Nature and Nurture on Child Development”

Frontiers in Psychology, “Genetics and Learning: How the Genes Influence Educational Attainment”

Today’s Parent, “Does Parenting Even Matter?”

Verywell Mind, “The Age Old Debate of Nature vs. Nurture”

Verywell Mind, “The Role of the Biological Perspective in Psychology”