Online MBA with a Concentration in Management, 2022

Darren Stam is no stranger to getting his feet wet. An avid scuba diver before his three daughters were born, he knows how to jump in feet-first when he has his mind set on a goal.

That’s exactly what he did with his Master of Business Administration (MBA). Darren was already an accomplished professional with an established career, having earned a bachelor’s degree and a Doctor of Pharmacy 27 years ago and holding leadership roles for about 20 years. But he knew there was still more he could accomplish.

“If you feel like it will make you a better person or contribute to your growth as a person, both professionally and personally, I think it’s worth the commitment,” he says. “I did a lot of that internal ROI analysis myself before deciding to proceed here.”

Darren has always been highly motivated, whether in schoolwork, athletics, or his career, maintaining the mindset that he wants to continuously improve personally and professionally. That’s the mentality that led him to pursue a lifelong goal and earn his MBA almost three decades into his pharmacology career.

“It finally came to a point in my life where I thought it is time to do this now, or to never do it,” he says.

After researching universities and MBA programs, Darren saw that Maryville’s fully online MBA offered the credentialling and flexibility he needed to work around his career and his life.

It was scary whenever I decided to say, ‘yes, let’s do this.’ So, I think being brave is just being willing to confront that. That fear, or the challenge at hand, and persevering to get through it. 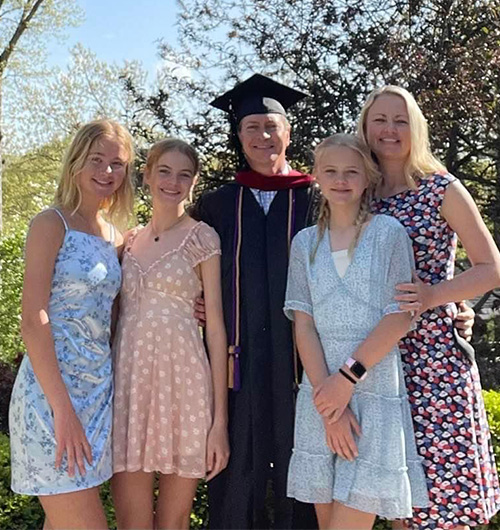 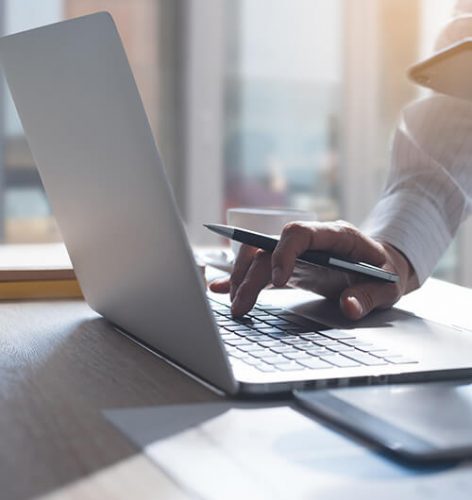 It takes courage to pursue an MBA so deep into a career. But Darren was driven to complete the degree and earn a concentration in management to become a better leader.  It helped that he had the full support of his wife, his three daughters, and his employer Sanofi — a global pharmaceutical company.

“I was very fortunate to have the program supported [by my employer],” he says, “so that triggered me to take the leap of faith to move forward, and I am very happy I did.”

Many who pursue their MBAs may be looking to position themselves for higher-level roles in their organizations, but Darren’s motivations were more forward-focused than that. The MBA will help him do his job better today, but it will also help him in retirement.

“It will enable me to do something different, take a different career path, in business and real estate, some of the interests I have when I retire from my current job,” he says. “I am thinking longer-term it will bring some added advantage to me and those aspirations as well.”

A deep commitment to himself and his daughters

Already working a 9-to-5 job, like most graduate students, Darren would come home from his office over the past two and a half years and go directly into his family room to work for another three hours on his MBA. There were times when the commitment was challenging, and having been out of the university setting for so long, it took Darren some time to test the waters and become acclimated to academic expectations — and with writing papers — again.

“It comes back to being focused and disciplined when striving towards a goal,” he says. “That was the biggest question that I had when I chose to move forward with the program. It comes down to that part, just reflecting that I did it. I set the goal. I set the time and focus on it. I achieved it.”

Throughout the two-and-a-half years it took to complete the program, Darren says his follow-through on his commitment and being a positive role model for his children were among the most rewarding aspects of this experience.

“That probably is the biggest thing that will stick with me for such a long time,” he says. “The tangential part of it is just the example it can set for my three daughters, seeing their dad go back to school at this point in my career and commit to doing that. I think that has some positive impact.”

Success is knowing personally that you put your best effort out there, even if it means failure sometimes.

Leading the way through leadership

Throughout the MBA program, Darren has been able to apply what he’s learned to his job in leadership. He has become more strategic from a planning perspective, he maintains a better appreciation for corporate finance-related issues, and he’s more thoughtful in terms of his approach to interpersonal communications.

Darren’s favorite parts of the program were the times when it brought novel experiences and showed him areas where he had the least amount of exposure. In his current role, he hasn’t had much opportunity to see the business and finance side of things, but courses in areas like global business, economics, and marketing allowed him to learn more about these areas and functions.

“I took away a lot of principles from those that I can apply in my job,” he says. “I was thinking more about marketability and branding, things I would not have thought about before.”

Darren’s experience in the MBA program was enhanced by Maryville’s faculty and support staff, including his advisor, Mercedes, who helped make his journey a smooth one. He appreciated the one-on-one focus he received from his professors — particularly Dr. Williams, who guided him through the capstone experience.

“He seemed to have a little bit more hands-on approach with engaging students through the discussion forums and providing feedback, and also through his weekly video,” Darren says.

It takes a little bit of courage — and a leap of faith — to choose to work toward an MBA, especially deep into a successful career like Darren’s. But the sense of accomplishment after achieving his goal makes it all worthwhile.

“Being brave means taking that leap of faith into the unknown for something that you know in your heart will be of benefit to you,” Darren says. “It was scary whenever I decided to say, ‘yes, let’s do this.’ So, I think being brave is just being willing to confront that. That fear, or the challenge at hand, and persevering to get through it.”

With the will, the follow-through, and the courage to pursue this milestone, Darren has redefined success on his terms.

Darren plans to continue implementing the knowledge, skills, and tools he learned in Maryville’s online MBA program in his current role as well as his personal and professional pursuits in retirement.

As for his next leap of faith, Darren may be returning to more familiar waters after retirement.

“I used to be a big scuba diver before kids,” he says. “I would hope to get back to that, maybe later in life.”

Find more stories from students like Darren who prove that you can achieve your goals on your own terms with Maryville. 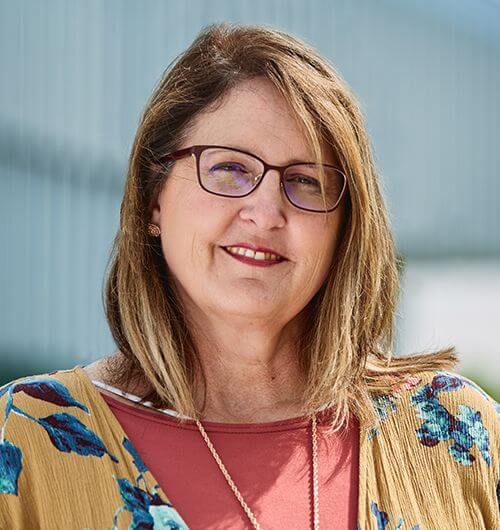 Inspired by her son. Empowered by Maryville.

Brenda Dinges almost lost her son when he was 12 — then graduated college alongside him in 2019, earning her nursing degree. Her journey has taken her from her rural family farm into leadership positions in busy emergency rooms.