Women in Statistics and Data Science

The 2016 film Hidden Figures was a hit at the box office, earning millions of dollars and multiple Academy Award nominations. The film garnered widespread acclaim from critics and audiences alike for its portrayal of three black women working for NASA in the 1960s. Though Hidden Figures fudged some facts and dates to fit its narrative, the central figures of the movie were real –– including Katherine Johnson, portrayed by Taraji P. Henson. Johnson was a NASA mathematician for over 30 years, helping the Space Task Force calculate trajectories for launches and landings on the Mercury, Gemini, and Apollo missions. Famously, Johnson hand-checked the numbers for John Glenn’s Friendship 7 launch at the astronaut’s request. She was also the first woman in the Flight Research Division to receive credit as an author of a research report.

Johnson’s contributions to NASA, spaceflight, and human history are incredible, especially considering she was one of the first three black students ever admitted to West Virginia University’s graduate school. She’s been able to see the results of her pioneering work, celebrating her 101st birthday in August 2019. During her lifetime, women have made tremendous strides in science, technology, engineering, and math (STEM), but there is still work to be done to achieve equality in what have been traditionally male-dominated disciplines. Continue reading to learn more about women in statistics and data science, including some key factors in creating greater equity in STEM fields. 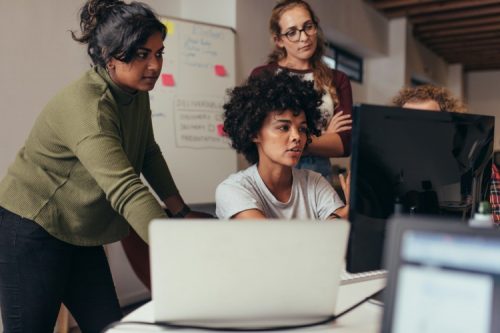 History of Women in STEM

With rare exception, until the mid-19th century, it was uncommon for women in the United States to receive an advanced education. However, the women’s rights movement in the early 20th century started to change that, and by the mid-20th century, it was common for women to go to college. They tended to major in liberal arts, as men still dominated the science and engineering majors. However, there were women making major discoveries in STEM-related fields during that time. In 1903, Marie Curie became the first woman to win the Nobel Prize in physics, showing the world that women could change the face of science.

Even though women continue to face significant barriers in fields such as statistics and data science, they have made groundbreaking discoveries and advancements in STEM. Here are several women whose work in statistics, data science, and related fields not only paved the way for more women to pursue work in STEM but also helped move human understanding of science forward.

Though she’s most famous for her role as the founder of modern nursing, Nightingale was a notable mathematician and statistician as well. A British woman born in Italy in 1820, her work as a nurse during the Crimean War in the 1850s exposed her to the poor conditions in army hospitals and medical centers, where more soldiers died from infections developed during their recovery than from the wounds themselves. Nightingale made it her work to increase sanitation levels and reduce illness rates. Inspired by what she had witnessed, she merged her love of mathematics with her personal experience, taking a statistical approach to analyzing hospital reforms. She earned the approval of Queen Victoria and a place in the Royal Statistical Society of England, becoming its first female member in 1859.

Another important woman in statistics and data science was Gertrude Cox. Born January 13, 1900, in Iowa, Cox earned the inaugural master’s degree in statistics in 1931. She went on to become the first female professor and department head at North Carolina State College (now North Carolina State University), where she led the Department of Experimental Statistics. She helped establish the University of North Carolina’s Department of Biostatistics, where she mentored what the American Statistical Association called an “outstanding faculty and staff” while her “zeal at the institute led to many spinoff facilities in North Carolina.” The first female member of the International Statistical Institute, she was also elected to the National Academy of Sciences and named an honorary fellow of the Royal Statistical Society.

After graduating from Vassar College in 1928 with a degree in mathematics, Grace Hopper went on to earn both a master’s and a PhD in mathematics from Yale University. She was one of the first women to earn a PhD in mathematics, completing it in 1934. She joined the U.S. Navy Reserves during World War II, where she helped program some of the world’s first computers –– the Mark I at Harvard and UNIVAC, the first general-purpose computer designed for business applications. Her team also developed the first compiler, which paved the way for modern computer programming languages. She didn’t fully retire from the Navy until 1986 at 79 years old, after helping the organization standardize its computer communications languages. Hopper was posthumously awarded the Presidential Medal of Freedom in 2016.

One of seven daughters of Ukrainian immigrants, Mollie Orshansky began working for the government after graduating from Hunter College in the early 1930s. She joined the Social Security Administration (SSA) in 1958 and focused her work on poverty and its effects on children. She developed the Orshansky Poverty Thresholds, which the U.S. government still uses to determine how much people need to earn to stay above poverty levels and how many people are living in those conditions. Her work illuminated economic and social conditions in the United States and spurred national initiatives, such as the War on Poverty launched by Lyndon B. Johnson in the 1960s.

Increasingly, young men and women have access to similar resources for STEM development. The National Girls Collaborative Project reports that high school boys and girls take AP exams in calculus, statistics, and chemistry at similar rates, though boys are more likely to take AP engineering and computer science courses. In college, men are still more likely to earn degrees in computer science (82%), engineering (80%), physical sciences (61%), and mathematics (43%), though women do earn more than half of all degrees conferred in the biological sciences. Underrepresented in many STEM fields are women of color and other minority groups; Hispanic, African American, and Native American people make up 27% of working-age adults in the United States but account for only 11% of the science and engineering workforce. While women in statistics and data science continue to drive innovation, there is still a need to level the playing field so that more women can access resources and advanced education in these disciplines.

Founded in 1872 as a school for young women, Maryville University has always served women in the pursuit of their education. From Maryville University’s earliest days as a private academy to its evolution to a degree-granting institution in the 1920s, and later to a coed center for advanced learning in the 1960s, we’ve remained focused on integrity and equality. Discover how we’re helping more women in statistics and data science achieve their academic and professional goals through our online Master of Science in Data Science. At Maryville University, the next generation of women in STEM are already inspiring change in the world of statistics and data science.

The Future of Artificial Intelligence in Work and Everyday Life

Data Science Central, “On Being a Female Data Scientist”

Obama White House Archives, “The Untold History of Women in Science and Technology”

Technial.ly, “A Conference Dedicated to Increasing Diversity in Data Science Is Coming to CHOP”

Wired, “Women in Data Science Are Invisible. We Can Change That”