Guide for Women in Computer Science: History, Roles, and Resources 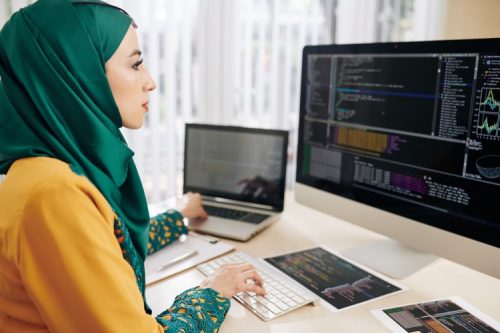 The achievements of these and other women throughout history have pushed the boundaries of computer science. But significant disparities remain between men and women in the field. Paying homage to women who have made significant contributions to computer science is a critical first step in closing that gap. Understanding the leadership roles available to women in computer science and how to reach them are also crucial building blocks for creating a more equitable workforce.

A history of women in computer science

Early in her career, Ada Lovelace, also known as Augusta Ada Lovelace (A.A.L.), worked alongside mathematician, inventor, and recognized father of computing Charles Babbage, who created the difference engine, a machine that performed mathematical calculations. She then made plans for the analytical engine, a device to handle more complex calculations. In 1843, she published a paper under the initials A.A.L. that described a method for repeating a series of instructions. The process, known as looping, is used in modern-day computer programs.

As depicted in the film Hidden Figures, Katherine Johnson’s biography includes contributions to elevating NASA programs in the early 1960s. Her calculations made orbiting around Earth and landing on the moon possible for humans. According to NASA, her calculations also helped “sync Project Apollo’s Lunar Module with the lunar-orbiting Command and Service Module,” and she co-authored 25 research reports. She received the Presidential Medal of Freedom, the highest civilian honor in the U.S., in 2015 at age 97.

Grace Hopper, considered among the most consequential computer scientists of all time, developed one of the first compilers, which translate one programming language into another. It paved the way for COBOL, a language still in use 60 years later. Her inventions also laid the groundwork for future computer advancements including code optimization, which allows code to work more efficiently or with fewer resources. She’s also known for helping popularize the term “computer bug” while working as a programmer on the Harvard Mark II Aiken Relay Calculator, a room-sized computer developed after World War II. The bug, a real-life moth, caused a computer flaw before it was extracted.

There’s a strong chance that astronauts Neil Armstrong, Buzz Aldrin, and Michael Collins would have aborted the July 20, 1969, moon landing were it not for Margaret Hamilton’s contributions to the Apollo space program. She wrote the software code for Apollo 11’s onboard guidance and navigation system, which was then adopted and adapted for remaining Apollo missions, the Space Shuttle program, and more. She is also noted for coining the term “software engineering” for her software development approach, which included rigorous testing. Hamilton was honored with the NASA Exceptional Space Act Award in 2003 and received the Medal of Freedom in 2016.

Above are just a few of the women who have impacted the history of computer science. Many more women have contributed to the field, including:

Resources on women in computer science

These links and resources offer additional information about the many achievements of women in computer science.

Women have long been underrepresented in the computer science industry, and a notable shortage of women in the field remains today. Here are key statistics that highlight the gender gap in computer science.

How can we close this gap? Introducing girls to computer science in early education is key. Support networks and role models who encourage the pursuit of technology studies — including parents, teachers, and friends — can inspire young women to pursue computer science careers. It’s also important for girls to have visible role models in entertainment and media.

Organizations like Girls Who Code and ProjectCSGirls partner with schools to establish tech programs and clubs for female students, while also seeking to break down historical and institutional boundaries such as racial bias and discrimination in technology fields. Universities are also seeking to make computer science courses more appealing and accessible to women.

The industry has a significant role to play as well. Building an inclusive culture for women to advance in their careers can play a crucial role in ensuring women remain in the field. Women leave computer science roles at a much higher rate than men due to workplace conditions, barriers to creative roles, and a lack of advancement opportunities, according to the National Center for Women and Information Technology. In this respect, companies committed to diversity and inclusion initiatives are in a great position to make a difference and bridge the gender gap in computer science.

Roles for women in computer science

Women fill a variety of roles in computer science. Women in leadership positions such as chief technology officer and engineering manager are well-situated to mentor other women interested in entering the computer science field. They typically have many years of experience and are often responsible for hiring new talent.

However, women in entry-level and midcareer computer science positions such as software developer, computer programmer, mechanical engineer, and computer support specialist can also play a key role in mentoring the next generation of women in computer science.

These are some examples of the roles available to women interested in pursuing computer science careers.

The primary focus of a software developer is to develop, design, and implement computer programs and applications. Specific responsibilities vary depending on the type of hardware and business focus of their employer. Some developers create the software that runs devices and networks. Others create applications that people use on laptops, mobile phones, and gaming devices.

Programmers use computer languages like Python and C++ to write code, test software, and fix bugs to ensure that software delivers the expected results. From flight training simulators to ATM machines, the devices we rely on were all coded by computer programmers.

Women interested in learning more about computer science and how to build a career in the field can check out the following informational and educational resources.

A future for women in computer science

With computer science and related technology occupations projected to grow 11% between 2019 and 2029, according to the U.S. Bureau of Labor Statistics, far outpacing the average growth for all occupations, the field will need more workers for years to come. Women are ready to take on these roles and continue to advance the field of computer science, but the gender gap must be addressed. Key steps include fixing computer science education and bringing more women into leadership roles.

Women interested in shaping the technological future can learn more about the field and how to take their place at the table, designing, innovating, and building the software and hardware that drive the world.