A record number of 142 women are serving in Congress in 2021 following a landmark election that saw more women, including women of color, running for office than ever before. Still, women make up just a quarter of Congress, while comprising more than half the U.S. population.

Throughout U.S. history, women have played an important and evolving role in the political landscape — from Abigail Adams urging the Founding Fathers to “remember the ladies” in 1776 to this year, when Kamala Harris became the first woman and woman of color to take office as vice president.

A history of women in American politics

The history of women in American politics is rich and varied. As the nation grew, women’s roles in government and political movements evolved as well, though it wasn’t always easy. Women have been actively excluded from the political landscape for centuries, often having to fight or even inherit their way into a government role.

The term “widow’s succession,” for example, was coined to describe the most common way for women to enter Congress well into the 1970s: by being elected or appointed to take the place of a deceased male relative. In 1922, Winnifred Mason Huck was elected to finish her late father’s term as a representative in Illinois. In 1973, Lindy Boggs took over her husband’s seat as a Louisiana representative after he was presumed dead in a plane crash; she kept her position for over 18 years.

Below are some notable dates and events for women in American politics: 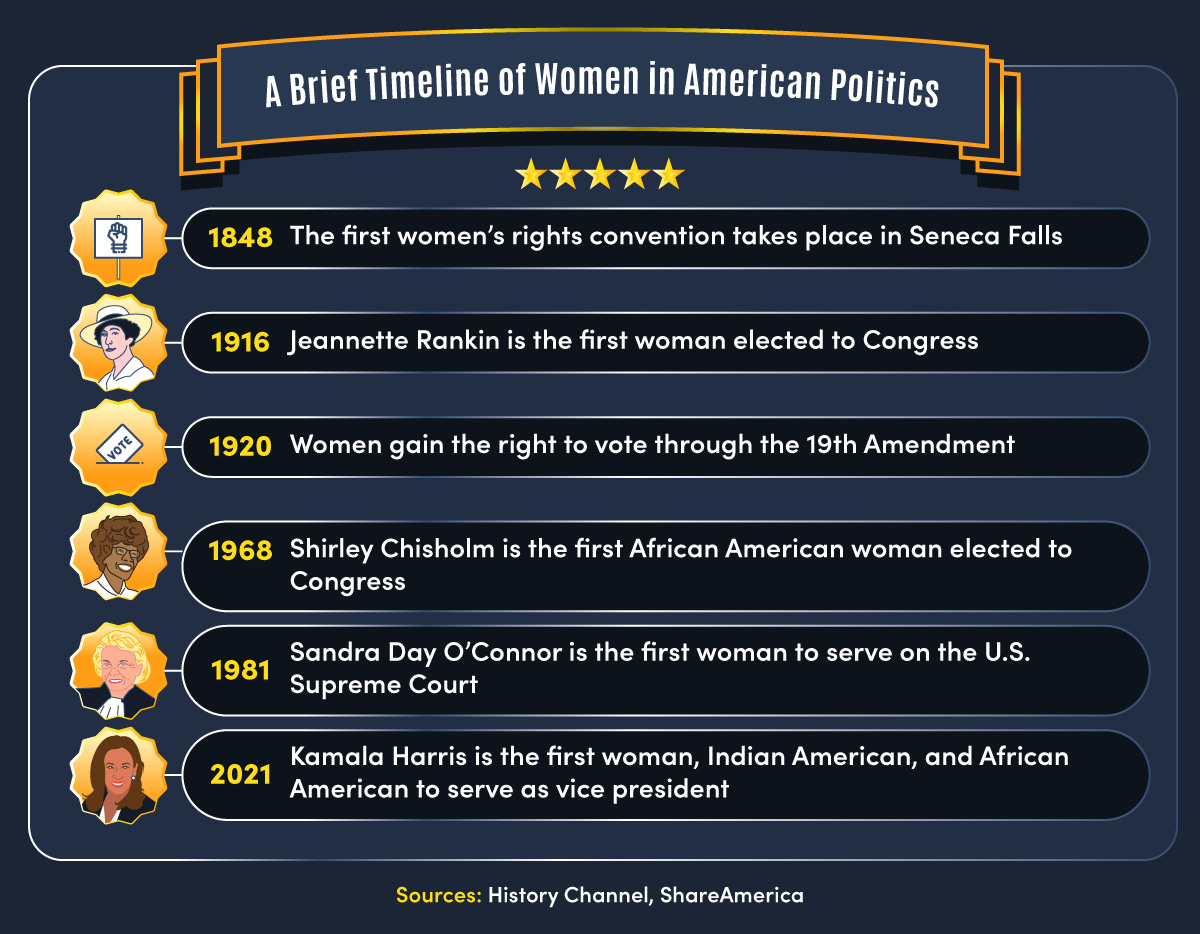 African American women in politics have made great strides to advance the causes of human rights, racial justice, and diverse representation despite the barriers inherent in a country based on slavery where systemic racism has persisted. Even the National American Woman Suffrage Association was predominantly white, excluding African American suffragists from its efforts and engaging in segregationist practices.

These are just some of the most notable names and accomplishments of African American women in American politics:

A former slave, Sojourner Truth became a leader of the abolitionist and women’s rights movements. In 1851, she attended the Women’s Rights Convention in Ohio and delivered her famous speech, “Ain’t I a Woman?”

Mary Church Terrell was the first president of the National Association of Colored Women (NACW), founded in 1896. Using the motto “Lifting as We Climb,” the NACW was created to advance the rights of African American women and break down barriers to voting for the African American community as a whole.

She went on to become the first African American member of the American Association of University Women in 1948. She continued to protest segregation and fight for civil rights throughout the U.S.

In 1977, Patricia Roberts Harris became the first African American woman to serve in a Cabinet position when she was appointed secretary of housing and urban development by President Jimmy Carter. She went on to serve as secretary of health, education, and welfare in 1979.

After assuming her first Cabinet role, dissenters criticized her for her former position as a corporate lawyer, questioning her ability to understand and represent the needs of the poor. She told them, “I am a Black woman, the daughter of a dining car worker. I am a Black woman who even eight years ago could not buy a house in parts of the District of Columbia. I didn’t start out as a member of a prestigious law firm, but as a woman who needed a scholarship to go to school. If you think I have forgotten that, you are wrong.”

In 1992, Carol Moseley Braun of Illinois became the first African American woman elected to the Senate, where she advocated for issues such as women’s rights, racial justice, and diverse representation. She fought to fund historic preservation of Underground Railroad sites and to stop the usage of the Confederate flag in designs for the United Daughters of the Confederacy.

When Moseley Braun was sworn into office in 1993, she said, “I cannot escape the fact that I come to the Senate as a symbol of hope and change. Nor would I want to, because my presence in and of itself will change the U.S. Senate.”

These links provide more information about the role of African American women in politics and how to support their inclusion in U.S. government: 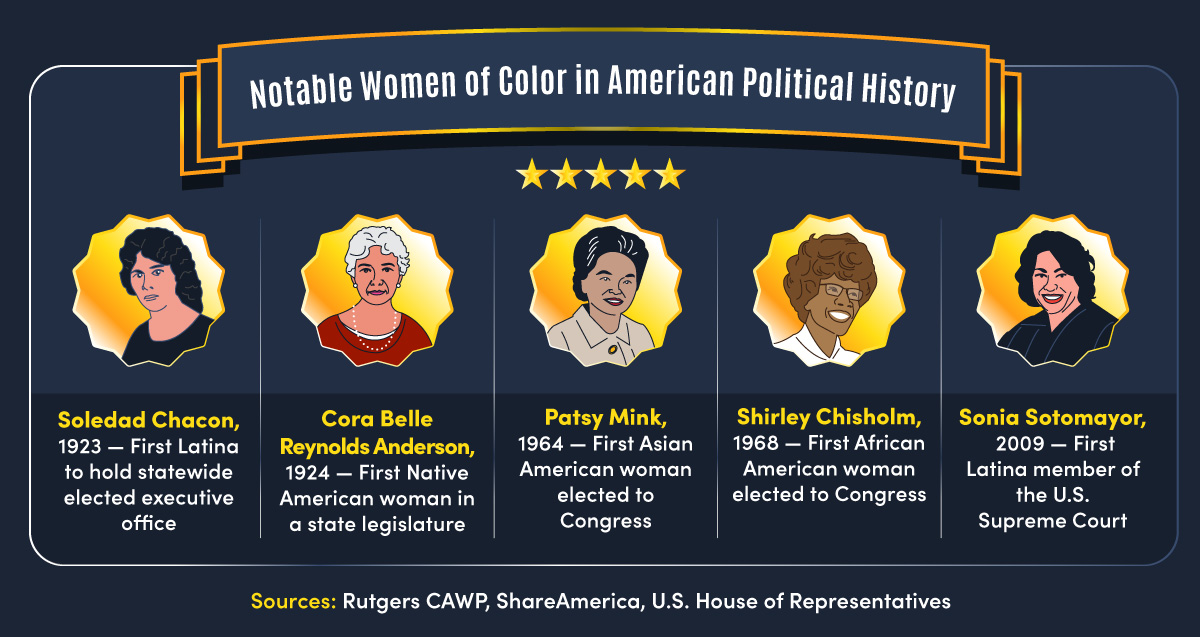 Other women of color in politics

Women of color in politics, including Latinas, Asian Americans, Pacific Islanders, and Native Americans, have made a significant impact as elected officials, community leaders, and revolutionaries.

Below are notable women of color in politics and their achievements: 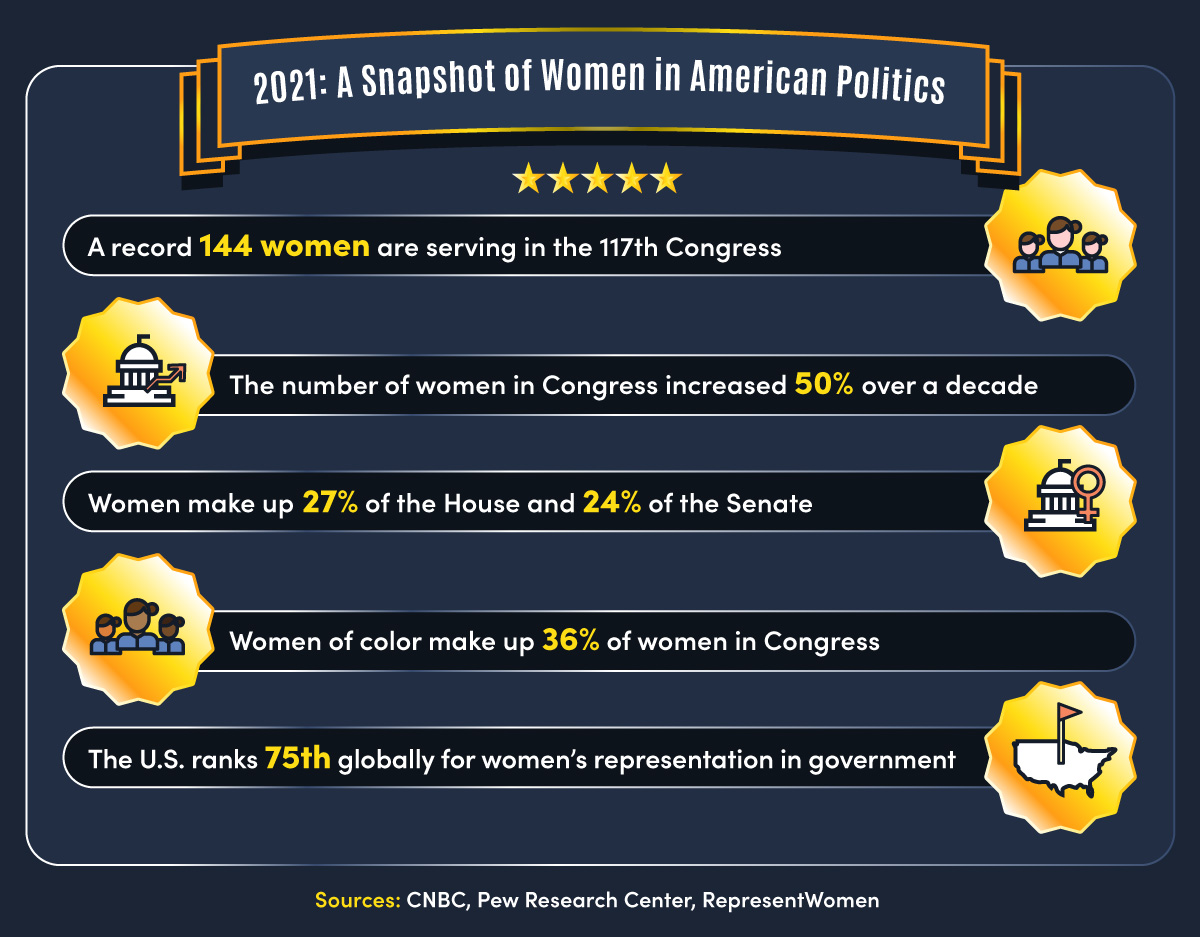 Data from CNBC, the Pew Research Center, and RepresentWomen report that a record 144 women are serving in the 117th Congress; the number of women in Congress increased 50% over a decade; women make up 27% of the House and 24% of the Senate; women of color make up 36% of women in Congress; and the U.S. ranks 75th globally for women’s representation in government.

Women’s roles in American politics are evolving, opening new opportunities for women politicians to be decision-makers and policy changers. The number of women in Congress increased 50% over the last decade, with women now making up 27% of the House of Representatives and 24% of the Senate. Women of color now make up 36% of women in Congress. Women also make up over 30% of U.S. state legislators, a nearly seven times increase from 1971; 25.5% of them are women of color.

Still, we have a long way to go in creating equal representation. Despite these gains, the U.S. ranks 75th out of 193 countries globally for women’s representation in government. A lot of room exists for women to increase their participation in politics and become leaders and mentors for other women entering the field.

Resources for women in American politics

Women interested in building careers in government can access a range of resources to help them succeed in what is still a male-dominated and largely white field. Through these resources, they can learn more about their country’s political history, overcome obstacles to entry, network with colleagues, receive mentorship, and gather support.

Future women in American politics can consider these helpful resources:

The future of women in American politics

Women continue to become involved in American politics and create lasting change through their work, building on this complex and varied history. In the past few years alone, women and women of color have made an impact by running for Congress in record numbers and now hold more seats than ever before. The future of women in American politics depends on these efforts and increased action from current representatives and constituents in supporting women for U.S. government positions.

CNBC, “Despite Gains, the US Ranks 75th Globally in Women’s Representation in Government”

Pew Research Center, “A Record Number of Women Are Serving in the 117th Congress”

Rutgers Center for American Women and Politics, “Milestones for Women in American Politics”

ShareAmerica, “Women in Politics: A Timeline”