Why Is Diversity Important in the College Experience? 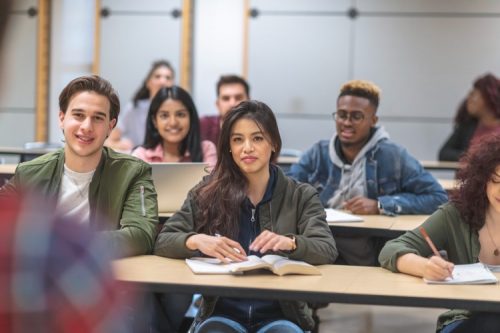 The United States is more diverse than ever, and the nation will diversify more in the coming decades, according to a 2020 Pew Research report. For example, in terms of race and ethnicity, the U.S. Census Bureau projects that the percentage of Americans who identify as Black, Asian, and/or Hispanic will increase from 40% in 2019 to over 50% by 2044.

Why is diversity important in college? Learning alongside people from different backgrounds and cultures prepares students for the real world. Moreover, diversity in college can become a source of strength and joy that enriches a student’s life well beyond graduation.

Diversity encompasses many different identities, traits, backgrounds, and experiences. Sources of diversity on college campuses include things such as:

Diverse campuses foster experiences that empower students from all walks of life to share what makes them unique.

Universities play a central role in bringing diverse minds, perspectives, and experiences together.

The history of diversity in college reflects America’s own struggles for social equity. Most American universities began as institutions exclusively run by and for white males but have become more equitable in response to calls for racial and gender parity. Rare institutions, such as Maryville University, started educating women in the 19th century, but coed institutions weren’t the norm until the 20th century. More than 70% of students attended coed institutions in 1934, compared with 46% in 1880, according to the Journal of Human Capital. Additionally, many U.S. institutions did not enroll Black students until the 1960s, when desegregation and affirmative action efforts began to take shape.

Student activism has galvanized civil rights movements, transforming higher education for the better. From the student protests of the 1960s to social injustice activism in the 2020s that prompted pledges for inclusion, academics and activists work together to make colleges and universities more accessible to all.

Historically Black colleges and universities (HBCUs) also support their communities directly. Notable graduates include civil rights leaders, playwrights, authors, politicians, and lawyers — leaders who have helped to change the course of U.S. history through their activism and lasting works.

More people of color attend college than ever before. According to a 2020 review by the American Council on Education (ACE), Race and Ethnicity in Higher Education: A Status Report, the share of undergraduates who identified as non-white grew from 29.6% to 45.2% between 1996 and 2016, while the share of non-white graduate students grew from 20.8% to 32%.

Higher education must continue to push for social justice, equal access and inclusion. According to the 2020 ACE report, students of color were still much more likely to encounter people from similar backgrounds in service and maintenance staff positions than among faculty. Researchers found that 41.3% of all service and maintenance staff identified as people of color in 2019, compared with only 21.5% of full-time university faculty members.

As Quill Kukla, professor of philosophy at Georgetown University, writes, “People who have socially dominant positions are disproportionately the ones who get to shape institutions and norms, and so the world is built around their perspectives and needs, to a large extent.”

Kukla explains that in historically male-dominated academic fields, such as philosophy, intellectual work has largely failed to reflect experiences common to women. Philosophical work concerning pregnancy, caregiving, and gendered violence have been largely absent in academic discussions, for instance, despite the ubiquity of such experiences among women.

Insofar as college is preparation for a meaningful career, students should strive to expose themselves to diverse people during these formative years to get ready for jobs after graduation.

Here’s why: People with different identities and backgrounds likely have experienced different facets of the world. Like with American philosophers who largely failed to write about caregiving before more women joined their ranks, people in all spheres of life have opportunities to learn from other people’s experiences.

Today’s most challenging problems require divergent thinking and an ability to work with people across cultures. Students who differ in terms of race, gender, class, ability, sexual orientation, and so forth challenge one another to perceive the world differently — which can help make the world more hospitable and equitable for all.

Addressing climate change, for example, requires internationally coordinated efforts. Graduates who cultivated the skills of working in diverse environments and an ability to think interdisciplinarily may be better suited to effect positive change in public policy, advocacy, scientific research, and communications.

Is eating meat right? Are humans inherently selfish? What makes someone a good friend? What duties does a person have to their parents? Is breaking the law always morally wrong?

Engaging thoughtfully with people who are different from us gives us insight into our own upbringing and cultural heritage. In this way, diversity on campuses can give rise to new questions, challenge the status quo, and offer us different ways of navigating the world beyond those learned in childhood.

Students should respectfully engage with their classmates and professors about things that make them different, such as where they grew up, their family history, and their lived experience as a person of a specific race, class, or gender, for example. In doing so, students open the horizon beyond what their own culture deems “normal.”

Finally, college students intuitively understand that diversity is a valuable source of delight.

Experiencing diverse cultures opens up new sources of fun and pleasure that can enrich a person’s life long after graduation. Human beings from all backgrounds engage in culturally informed practices:

Diversity’s fruits are sensory delights: novel sights, sounds, tastes, smells, and textures — all of which can be explored and enjoyed more freely when we welcome diversity on college campuses.

Contribute to Diversity by Telling Your Unique Story

By courageously offering one’s own life story and heritage as topics for reflection, everyone benefits. The beauty of diversity in college is that each person brings a unique perspective to their campus community.

Maryville has been challenging the status quo since 1872 as an institution that educated women during a time when other colleges refused. Today, Maryville’s inclusion commitment fosters a culture of diversity and equity that encompasses all students.

One brave decision can change a person’s life. Students who want to learn more about which educational path is right for them can explore Maryville University’s online degree programs.

ALCU, “Your Right to Equality in Education”

Journal of Human Capital, “Putting the ‘Co’ in Education: Timing, Reasons, and Consequences of College Coeducation from 1835 to the Present”

Pew Research Center, “Americans Are More Positive About the Long-Term Rise in U.S. Racial and Ethnic Diversity Than in 2016”

Philosophy by Women, “Philosophy, Comedy, and the Need for Good Material”

Radcliffe Institute for Advanced Study at Harvard University, “The Complicated History of Women at Harvard”

U.S. News & World Report, “Diversity in College and Why It Matters | Best Colleges”