What Is Digital Media? All You Need to Know About This Booming Industry

The word “media” applies to many things in the 21st century, from mass media to news media, and traditional media to the many emerging forms of digital media. While you can likely come up with several different examples –– and almost certainly you take in some form of media in your everyday life –– it can be difficult to succinctly define the word.  It comes from the Latin medius or medium, which means “the middle layer.” Media is an expression that brings some type of information or entertainment from one body to another.

Before the advent of the digital age, the most popular forms of media were what we now call analog or traditional media: radio, newspapers, magazines, billboards, journals, and the like. Since then, the technological revolution has brought with it many new types of media that now play a major role in disseminating information and entertainment to populations around the world. But what is digital media? What does it encompass, how did it evolve, and where is it headed? Read on to learn more about digital media, including different types, major companies in the field, and digital media job markets. We’ll also unpack what kind of educational background can position you to embark on a career in digital media. 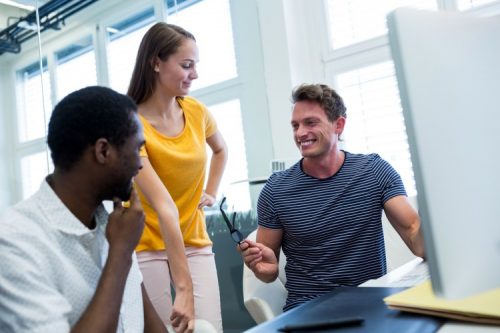 Unlike traditional media, digital media is transmitted as digital data, which at its simplest involves digital cables or satellites sending binary signals –– 0s and 1s –– to devices that translate them into audio, video, graphics, text, and more. Anytime you use your computer, tablet, or cellphone, opening web-based systems and apps, you’re consuming digital media. Digital media might come in the form of videos, articles, advertisements, music, podcasts, audiobooks, virtual reality, or digital art.

The digital age began to unfold in the second half of the 20th century, as computer technology slowly infiltrated different industries and then moved into the public sphere. Yet analog technology remained dominant even through the 1990s. In the years that followed, newspapers, magazines, radio, and broadcast television were still the primary means of communication, with fax machines and pagers becoming most people’s first casual forays into the digital world.

When the internet went from a niche hobby to something common in most American homes, the digital age was fully underway. Now, most people walk around with at least one digital media device in their pocket, purse, or backpack, using digital communication at work, on their commutes, and even while out to dinner or shopping. After that, they might come home and play a video game or stream a show, interacting with digital media yet again. Before they go to sleep, they might talk to their digital home assistant, finding out the weather forecast for the following day. What is digital media? The answer is not a simple one. Defining digital media is difficult because it is rapidly evolving alongside innovations in technology and how people interact with it. As we move into the future, our day-to-day use of digital media will likely only increase, particularly as holographic and artificial intelligence (AI) technologies are developed and incorporated into our daily lives.

Traditional (nondigital) media includes several types of communication technologies, some of which have existed for hundreds of years. Newspapers, magazines, books, and other printed materials were among the first types of traditional media. Those forms of media persist, joined in the 19th century by the telegraph and in the 20th century by radio and television, the first examples of mass media.

The digital era, however, meant a whole new set of media transmission methods and devices, with more developed every year. These days, most types of digital media fit into one of these main subgroups:

Digital media encompasses a wide array of websites, tech devices, and platforms. You may be aware of some uses of digital media, but the fact is that digital media influences many industries and has opened a range of avenues for people to make a living and utilize their talents in different ways.

Prior to digital technology, surgeons and other medical professionals had to rely on clunky simulators, videos, or cadavers to practice new surgeries, which made it difficult to perfect certain operations and increased complications when they were performed on living patients. Digital technology has introduced all sorts of new tools into the surgical suite, allowing doctors to better practice and perform such procedures, thus increasing patient safety and reducing mistakes while lowering costs. Modern-day surgeons practice using advanced virtual reality (VR) systems, working through different scenarios with digital versions of the same miniature cameras and sensors they’ll rely on during an actual surgery.

Digital media has also led to entirely new careers. Websites such as Twitch allow people to stream their daily lives, and people can pay to subscribe to individual channels to watch what interests them. Twitch streamers include video gamers, musicians, social influencers, and even those who just stream their daily activities, such as going to the store, cooking dinner, or cleaning the house. Users from all different walks of life expose subscribers to different cultures and lifestyles. Digital media professionals can also take advantage of easily obtainable technology such as cellphones and open-source coding to film their own shows, movies, or podcasts and stream them at little or no cost, creating greater equity in media. These are just a few examples of digital media, though the market for such products is expanding, and there are more applications every year.

As the digital world has taken over the modern business landscape, some of the most valuable companies in the world are in the tech sphere. Many of these companies have diverse interests and divisions, including in various forms of digital media and related ventures. As such, the top digital media companies are among the largest corporations on Earth.

Digital media includes a wide range of platforms, products, and industries. As such, the job market and earning potential for digital media careers varies based on industry, location, work experience, and education, but in general, the outlook is strong. Many digital media jobs, including those below, exist in various industries, including in the public and private sectors. As such, careers in digital media provide the opportunity to work in all sorts of different environments.

Jobs in digital media include many graphic design positions. Graphic designers create digital illustrations that convey information, from company logos to movie posters and much more. They use sketch pads, computers, tablets, and other devices to create their work. They utilize different fonts, colors, photographs, shapes, and aesthetic elements along the way. Those in graphic design work with clients to discern what they’re looking for, then go through a design process where they develop several options and tweak their ideas to fit the client’s needs.

Web design specialists use their graphic design skills to create websites and other web-based applications. They possess some knowledge of programming and coding, in languages such as CSS, HTML, or Java. Web developers help companies update their websites or design new sites from scratch, using existing templates or frameworks such as WordPress or Squarespace. They make sure websites look good on different devices while also remaining functional.

According to statistics from PayScale, the median average salary for digital media specialists was $34,000 annually as of December 2019. While the BLS doesn’t keep specific data on digital media specialists, reports from web marketing news outlets such as Social Media Today indicate that global online ad spending continued to rise significantly in 2019 (4% worldwide), with total spending set to reach $329 billion by 2021, which will account for 49% of all ad spending. These trends suggest favorable job growth in digital media careers.

How to Land Digital Media Internships

Working in all types of media, including digital media, means taking advantage of networking, which can lead to further opportunities down the line. Even at the high school level, students can begin interacting with digital media –– opening social media profiles, making connections, and even interning or creating digital content. But it’s in college that networking really starts to gain importance, as students start to figure out where they want to go with their digital media career. One common way for students to gain experience and valuable contacts in the industry is through internships.

Internships in digital media can take place over the summer, during a single semester, or throughout an entire school year. They might be in large office settings, or they may involve work in the community. The further along students are in their undergraduate career and the more skills they possess, the more they’ll be able to do in their internships.

Before beginning a digital media internship, there are several skills that are valuable for students to develop. Applicants should be confident interviewees, even without prior experience, demonstrating a willingness to learn and grow as they contribute. They should have solid writing abilities and demonstrate some skill in photography, graphic design, website design, or social media. During the course of an internship, students can develop other marketable skills such as storytelling, managing relationships with clients, drafting copy, content programming, and much more.

Some digital media internships pay, and some do not. While there is a push within media industries for paid internships, some businesses –– especially smaller companies –– are unable to pay their interns. When considering any internship, it is wise to consider the work experience to be gained, and what impact the internship will have on performing real work duties in the future.

What is digital media? It is expansive and increasingly pervasive, and it isn’t going anywhere. Digital technology will only continue to further its place in society, with home assistants such as Alexa and Siri leading the next generation of artificial intelligence gadgets and devices. In the near future, augmented reality devices such as headsets, heads-up displays, and even holographic technology will likely further digitize our daily lives.

Careers in digital media begin with the right undergraduate degree, which develops a foundation of skills and knowledge that positions graduates to begin any number of career paths. Explore how Maryville University’s online Bachelor of Fine Arts in Digital Media — with courses in marketing and digital media, design theory, UX/UI design, social media, and more — can prepare you to enter this multifaceted industry and offer vital visual communication strategies to businesses of all kinds.

Innovative Design Careers: How to Become a UX Designer

CNBC, “Amazon Beats Apple and Google to Become the World’s Most Valuable Brand”

HowStuffWorks, “Can You Explain the Basic Difference Between Analog and Digital Technology?”

Mashable, “What Companies Want in a Social Media Intern”

Medical Device and Diagnostic Industry, “The Future of (Digital) Surgery”

Pew Research Center, How Americans Get Their News