In 2021, a turning point was reached in the battle against cybercriminals who target global supply chains with their ransomware attacks:

Ransomware supply chain attacks have the potential to inflict serious financial and reputational damage  that can affect a company for years to come. Analysts predict an increase in “hub” attacks in 2022 and beyond as cybercriminals attempt to take advantage of companies that have extensive digital networks linking them with suppliers and customers.

The ransomware attack on information technology (IT) firm SolarWinds in 2020 now serves as a cautionary tale for manufacturers and other firms that depend on global supply chains.

Cybersecurity professionals are taking the fight to the crooks as they redouble their efforts to protect against ransomware and other supply chain attacks. Governments and private companies are adopting the same international collaboration to fight ransomware as is used to combat organized crime, terrorism, and global human trafficking networks.

This guide summarizes the efforts underway to catch and prosecute the international criminal gangs perpetrating ransomware and to prevent future ransomware attacks on the global supply chain.

What Is a Supply Chain Attack?

A supply chain attack breaks into the victim’s network by taking advantage of vulnerabilities in the computer systems of the company’s supply chain partners. The attacks are an attempt to infiltrate an organization’s computers to gain access to the networks of its many suppliers and partners. SecurityWeek describes such attacks as “hub and spokes” because by compromising one company, the criminals gain access from that hub to the firm’s partners via network connections serving as spokes.

Supply chains are perceived as especially vulnerable to ransomware attacks due to the broad targets they represent and the opportunity to cause large-scale damage via a single exploited vulnerability. 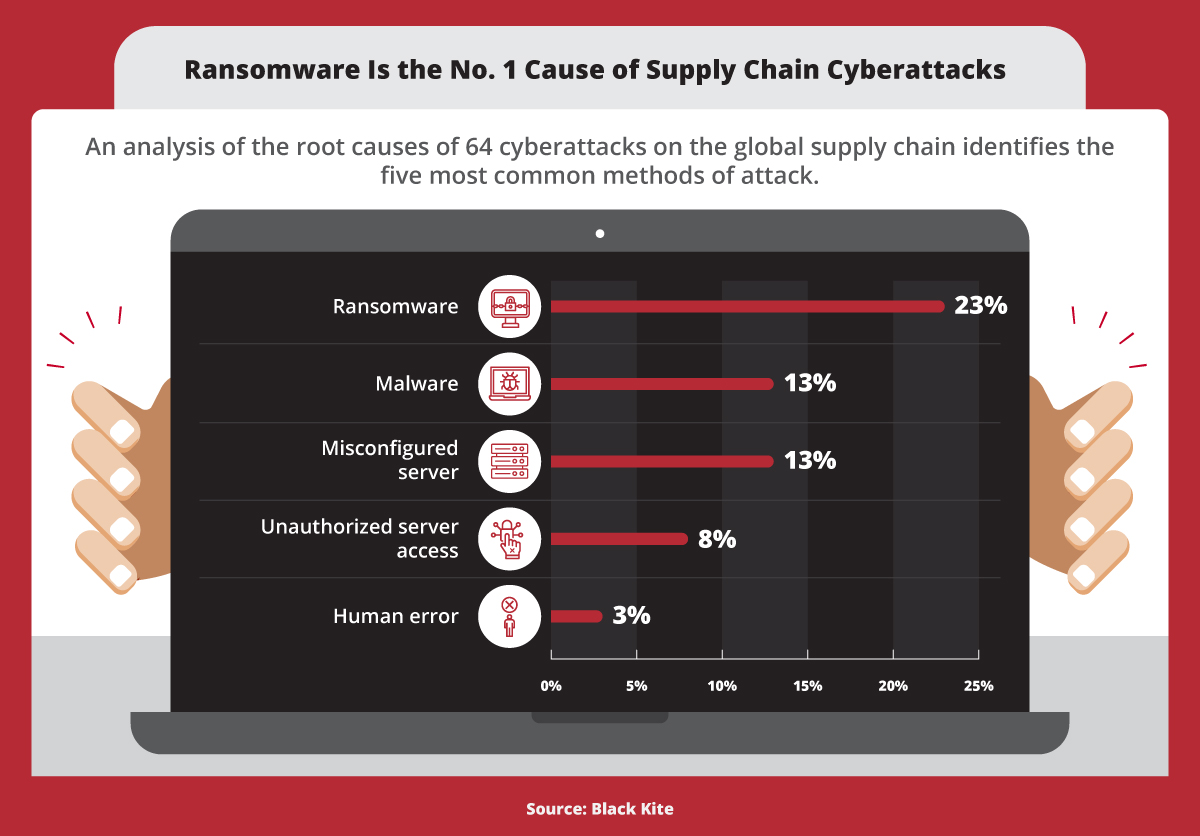 Techniques Used by Cybercriminals to Attack the Supply Chain

Managed service providers (MSPs) and managed security service providers (MSSPs) have been the sources of many breaches of supply chain security. The Internet Crime Complaint Center (IC3) warns that because of their trusted status with their clients, MSPs and MSSPs are becoming favorite targets of ransomware attacks.

This was the case with SolarWinds, whose Orion system management software was used by thousands of large enterprises, organizations, and government agencies. More than 18,000 Orion users installed a malicious software update, which remained undetected for months. The criminals attacking SolarWinds were able to access the data and networks of thousands of partners of the organizations using Orion. While the purpose of the attack is uncertain, the perpetrators are believed to be the Russian Foreign Intelligence Service.

A survey by security firm Kaspersky found that 98% of the MSPs affected by the ransomware attack on SolarWinds responded by strengthening their security measures. These are the actions the MSPs took most often:

MSPs that heard of the SolarWinds attack but weren’t directly affected by it were most likely to adopt new security solutions (32%), hire more IT security professionals (27%), spend more on IT security training (23%), and update internal data security policies (22%).

What Is Behind the Recent Surge in Ransomware Supply Chain Attacks?

CISA notes that cybercriminals’ ransomware attacks now target critical infrastructure more frequently. These are the industries that are most likely to encounter ransomware, according to CISA:

The impact of ransomware attacks on organizations can be devastating beyond their financial costs. In the past, companies were inclined to pay the ransoms and get back to business as quickly as possible, but in 2022 they face a backlash from the public for giving in to criminals, Forbes reports.

The Office of Foreign Assets Control (OFAC) of the U.S. Department  of the Treasury warns companies that they could face sanctions for facilitating ransomware transactions. In addition to losing the trust of the public, firms that pay ransoms to cybercriminals could face lawsuits for failing to protect the public from the damages they suffer as a result of the cyberattacks.

The Data and Digital Resources Targeted by Supply Chain Attacks

The one thing all ransomware supply chain cyberattacks have in common is they’re all after data of some kind. The criminals’ purpose may be financial gain and/or political power, but the tool they use to capitalize on the attack is data.

In defending against ransomware attacks, organizations must match each type of data to the most secure and efficient medium for storing that data, as InfoSecurity Magazine points out: 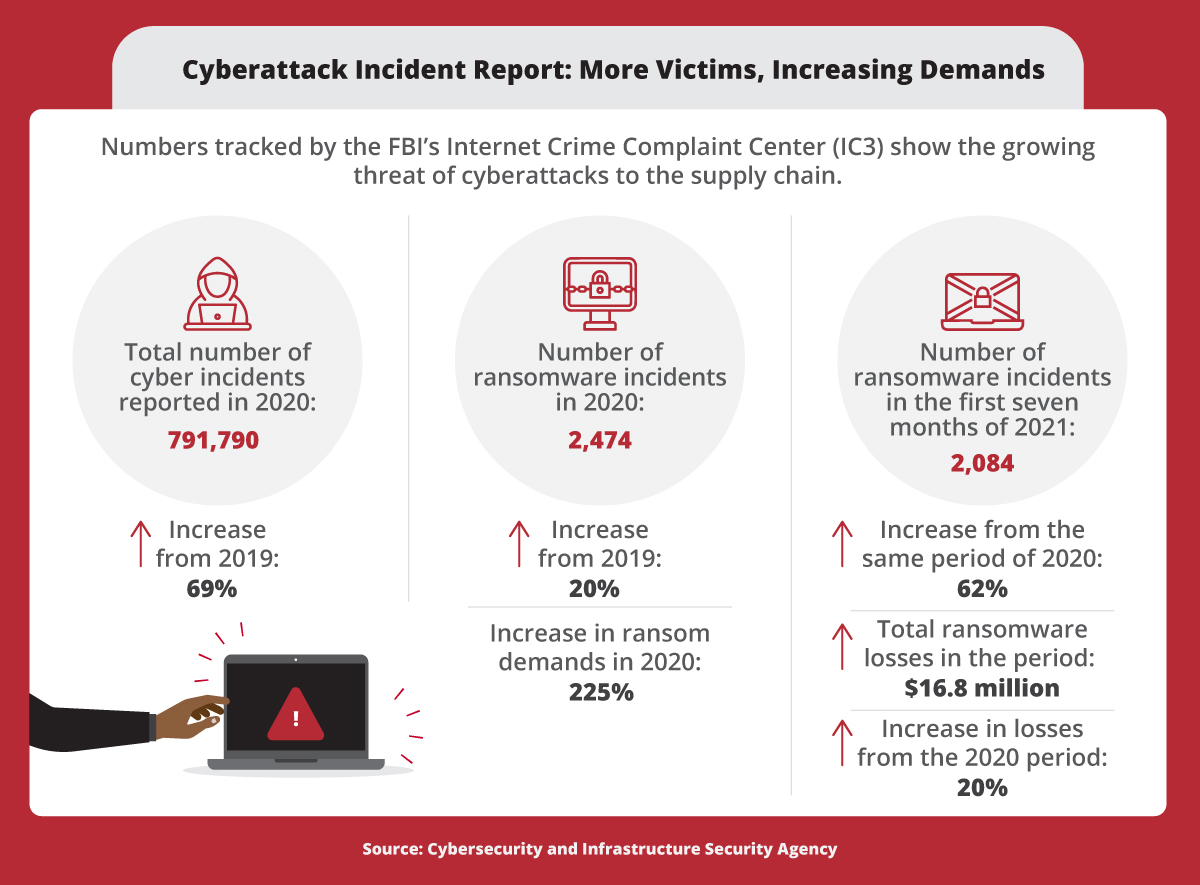 The damage done by attacks on the supply chain is widespread. In addition to the financial costs of cyberattacks to organizations, the crimes negatively affect a company’s relationships with business partners and customers. American Global Logistics examines the many risks entailed in securing supply chains from the threat of ransomware attacks.

Resources on the Risks of Supply Chain Cyberattacks

In 2021, ransomware was a component of 10% of all data breaches, more than twice the number recorded in 2020, according to the Verizon Data Breach Investigations Report. IDC’s 2021 Ransomware Study found that 37% of global organizations were victims of ransomware attacks, as TechTarget reports.

These are among the most damaging ransomware supply chain attacks:

Many companies use the SolarWinds Orion Platform to manage their IT systems, but a routine software update in March 2020 contained malware that security analysts believe the Russian intelligence service, SVR, planted. The hackers had gained access to the SolarWinds network starting in September 2019.

TechTarget reports that more than 18,000 SolarWinds customers downloaded and installed the malware-infested update, which allowed the attackers to access the firms’ computer networks and install even more malware. In December 2020, the security firm FireEye announced that it was the victim of a nation-state attack, and days later determined that the supply chain attack was the result of “trojanizing” the SolarWinds Orion Platform.

It’s estimated that government agencies and private companies may spend as much as $100 billion to recover from the SolarWinds ransomware attack.

Virtual systems administration software vendor Kaseya was attacked by the REvil ransomware in July 2021, resulting in more than 2,000 Kaseya customers around the world having their systems compromised. Executives at Kaseya had been warned as far back as 2017 of the software vulnerabilities that were leveraged in the attack, according to Bloomberg.

In November 2021, the U.S. Department of Justice announced that it had arrested a Ukrainian national and a Russian national, charging them both with instigating the Kaseya ransomware attack. U.S. officials also seized more than $6 million in ransom payments related to the case.

File transfer vendor Accellion initially announced that it had been hit by a cyberattack in December 2020 and that it had patched the vulnerability. However, days later the company was forced to admit that several other vulnerabilities remained, and it wasn’t until March 2021 that a complete patch of its systems was made available.

More than six months after the initial attack, more victims continued to be discovered, including the financial firm Morgan Stanley, which lost an unknown number of documents containing sensitive customer information. Other victims included an Arkansas-based healthcare service and the University of California, Berkeley.

Much like the SolarWinds ransomware attack, the malware that infected the distribution network of software testing vendor Codecov remained undetected for several months. The company announced that the attackers gained access to its network on Jan. 31, 2021, but the intrusion wasn’t discovered until April 1, 2021.

Analysts estimate that the ransomware affected hundreds of Codecov’s 29,000-plus customers, which include large firms such as GoDaddy, Procter & Gamble, and The Washington Post. The information that the attackers stole included customer credentials that allowed them to access hundreds of client networks. The credentials could provide the criminals with access to thousands of other restricted systems, according to investigators.

In June 2021, the Brazilian company JBS, the largest meat processor in the world, announced that it had paid a ransom of $11 million in Bitcoin after a group of hackers that the FBI believed to be the Russian-based group REvil attacked it. The ransomware attack had shut down the company’s U.S. beef plants and disrupted its pork and poultry operations. JBS stated that it paid the ransom to avoid losing vital information and compromising sensitive customer data.

JBS discovered the attack on May 30, 2021, after it had infected its IT systems in North America and Australia. Four days after the discovery, the firm had fully restored all its networks. The company claims that none of its data or customer data was lost as a result of the breach.

To stay ahead of the criminals, cybersecurity professionals need to constantly develop new approaches to prevent supply chain attacks as well as to mitigate their damage. In May 2021, President Biden issued an executive order on improving the nation’s cybersecurity that calls for enhancing software supply chain security by developing guidelines in three areas:

Even as ransomware supply chain attacks become more prevalent and sophisticated, organizations can take steps to reduce the risk of victimization. The first step in supply chain attack prevention is to audit existing defense methods to determine their reliability and identify gaps in security coverage. 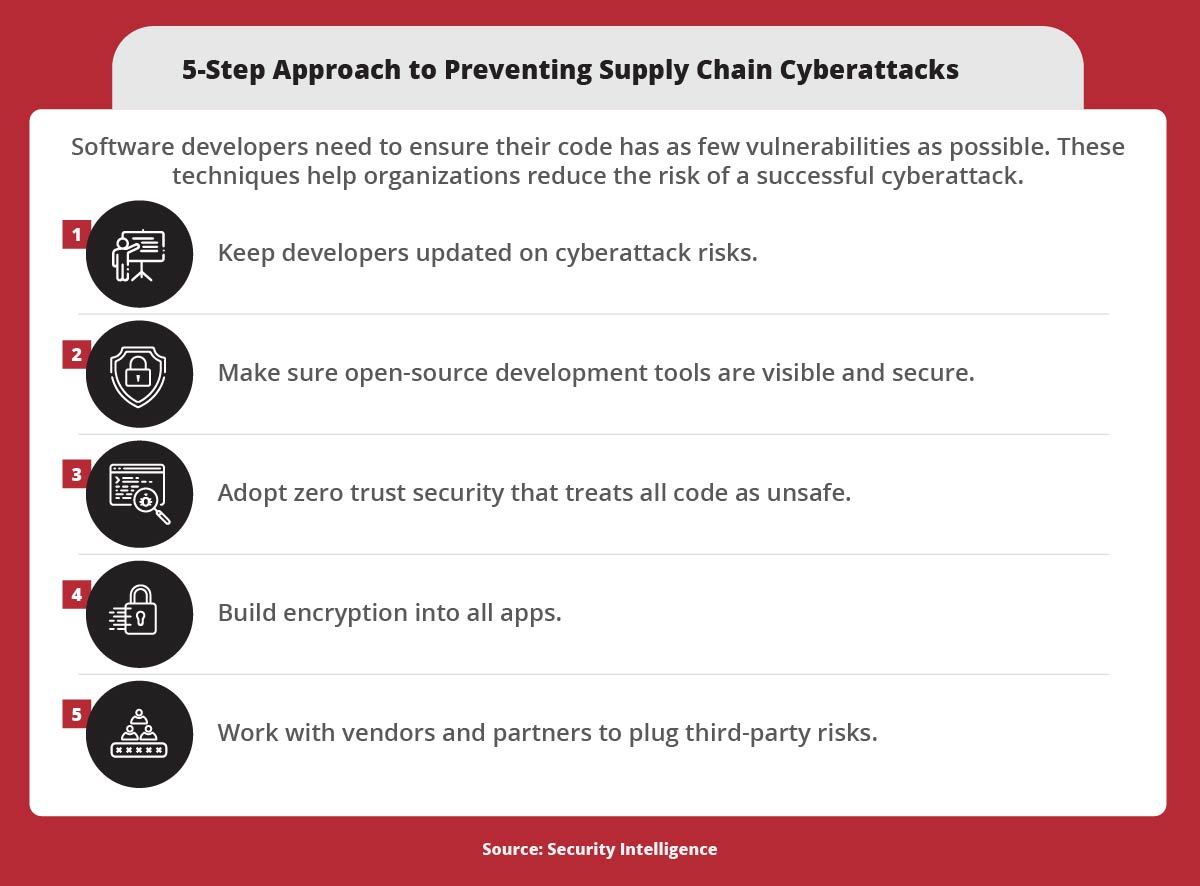 Software developers need to ensure their code has as few vulnerabilities as possible. These techniques help organizations reduce the risk of a successful cyberattack, according to Security Intelligence: 1. Keep developers updated on cyberattack risks. 2. Make sure open-source development tools are visible and secure. 3. Adopt zerotrust security that treats all code as unsafe. 4. Build encryption into all apps. 5. Work with vendors and partners to plug third-party risks.

Tools and approaches to achieve these goals include the following:

The Worldwide Battle Against Cybercriminals

The work being done in organizations and by government agencies to thwart ransomware, information theft, and other attacks on the global supply chains promises to reduce the risk of supply chain disruptions, despite the expected increase in ransomware attempts. Cybersecurity professionals who are trained in the latest approaches to keeping sensitive data safe are leading the efforts underway to make the supply chain more resilient and less susceptible to attack. More resilient and more reliable global supply chains benefit manufacturers, consumers, and the economies of nations around the world.