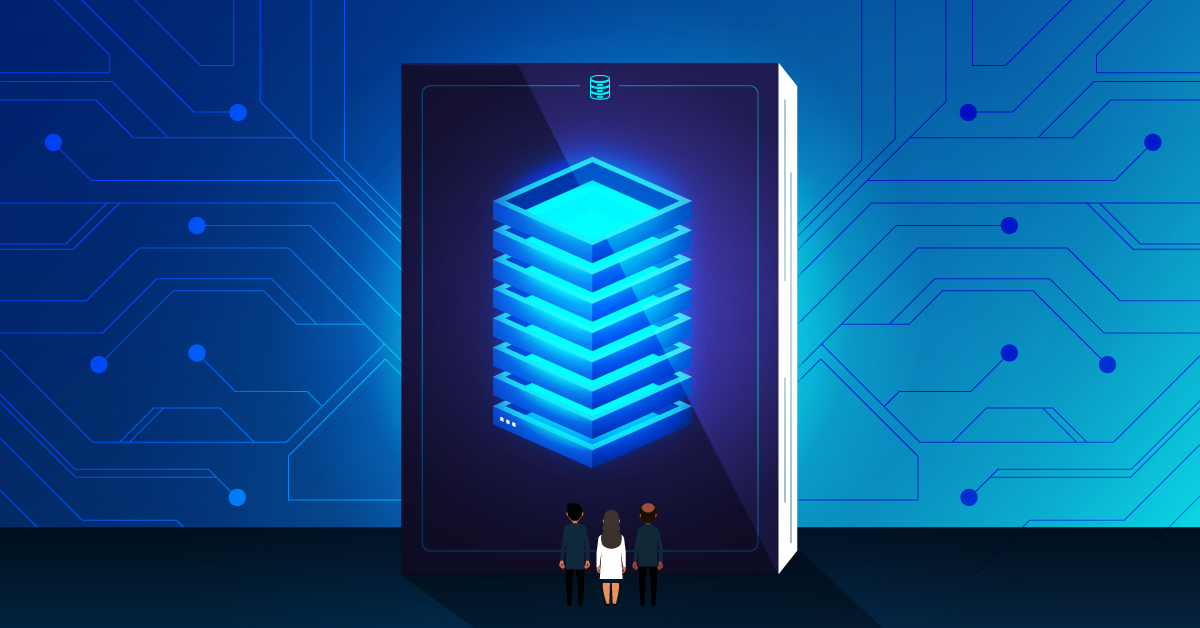 Businesses thrive by making good decisions based on relevant, up-to-date information about market and industry trends, competitors, and partners. One of the main ways companies access business intelligence to help them make those decisions is by extracting data from databases using the Structured Query Language (SQL, pronounced “sequel”).

This SQL guide presents the language as the primary tool for querying databases to generate the reports that business managers rely on to make decisions. SQL dates back to the earliest relational databases developed in the 1970s by Dr. Edgar Codd, Raymond Boyce, Donald Chamberlin, and other researchers at IBM, as Oracle-Patches describes. Relational databases allow data saved in one table to relate to data in any of the other tables that are stored in the database’s thousands or millions of records.

SQL makes it easier and faster than it’s ever been to search for and retrieve data on business-related topics and output the results in the form of a report. Since its inception some 40 years ago, SQL has evolved into diverse forms, some proprietary and some open system. Open system forms can be used with no license fees, although vendors are paid for support, services, and enhancements.

SQL is a tool used to query a relational database. It takes advantage of the relational model’s ability to assign attributes or properties to data, such as a number, date, monetary unit, or specific value. The basic SQL format consists of tables, rows, columns, and fields:

Why SQL Knowledge Is Important for Data Scientists

What Can SQL Do?

SQL has remained popular over decades because it meets the needs of businesses for a universal computer language that is powerful, accessible, and suitable for a variety of purposes.

How Do Data Scientists and Developers Use SQL?

SQL-generated reports are applied to solve many different kinds of business problems. SQL has the power and security features that the financial services sector and other large industries require, yet it is easy enough to learn that small and midsize businesses can benefit from using it.

These are among the uses of SQL by data scientists and developers.

Towards Data Science describes how to use basic SQL queries to pre-process data, which normalizes the data to make it easier and more efficient to query. Data normalization applies rules and criteria to database designs to create various normal forms, as SQLShack explains.

The benefits of using SQL to build and run machine learning models are examined on Towards Data Science. They include strong data analytics tools that are easy to apply. They also include the ability to run algorithms without having to access external data sources, which hinders performance.

Many organizations are using SQL for data warehousing, as SQLShack explains. This allows them to use SQL for data mining to enhance the classification, estimation, sequencing, association, and cluster forecasting of data.

Possessing SQL expertise helps boost the career potential for data analysts and developers. KDnuggets describes the importance of data to the relationship between buyers and sellers:

Data scientists rely on SQL tools to determine the value of the data stored in today’s massive databases and to ensure the data is accessible to business decision-makers in a form they can use to support their product plans and strategies. This makes data scientists with SQL knowledge more valuable to businesses.

Knowing SQL offers many other benefits, including the following examples.

SQL Is a Universal Language

SQL Is Open Source and Easy to Learn and Use

SQL benefits from a large and knowledgeable community of developers who freely share their valuable SQL programming tips and techniques. The query language is less difficult to learn than C++ and other popular languages, and the variety of open-source SQL versions provides data scientists and programmers with options that meet the needs of different business situations.

SQL Accommodates Databases of All Sizes

Spreadsheets aren’t able to support the large number and size of records that are stored in a typical business database. SQL can be used efficiently no matter how small or large the database is, whether it holds 1,000 records or 100 million records. The SQL database model allows queries to process millions of rows of data with no fear of crashing the system.

SQL Skills Are in Great Demand Among Businesses

A study conducted by Indeed found that SQL was the most-requested technical programming skill of U.S. employers in 2019. SQL was listed as a requirement in 21.9% of job postings evaluated, followed by Java (20.8%) and Python (18%).

What Are Common SQL Commands?

SQL commands are used to communicate with the database to create and modify tables, set user permissions, and perform other operations. There are five basic types of SQL commands, as Hackr.io explains:

DDL commands are used to change a table’s structure by creating, deleting, or modifying the data it contains. The commands are saved in the database automatically, or “auto-committed.”

This command is used primarily to add a new attribute to the database structure or to modify an existing attribute. Example uses include dropping an existing column from the table, renaming a column or table, or reducing a column’s size.

This command creates a new table by specifying the table name and column names, sizes, and properties.

This command is used to delete an entire table, including all the data the table contains.

This command specifies a new name for an existing table.

This command deletes all rows from a table and frees up the space that was used by the table.

DML commands are used to modify the database. Unlike DDL commands, they do not auto-commit, so it’s possible to undo DML commands.

This command removes one or many rows from the table. Specifying just the table name deletes all of its rows, while adding a condition removes only the rows that meet the condition, such as WHERE Name = “Smith.”

This command is used to insert data in a table row by specifying the table name and the values that will apply to the new data, such as names, ages, and addresses. It can also be used to add data that is extracted from another table.

This command modifies the value of a table column and applies the change to all rows or only those rows that meet a specified condition, such as those that contain a particular state code or ZIP code.

DCL commands regulate access to the data stored in a database. The commands apply various user access privileges to grant or disable access by specific users.

This command provides the user with access privileges and stipulates the actions the person is allowed to take, such as selecting and updating tables, and the ability to grant access privileges to other users.

This command takes away a user’s access privileges. It can be used by anyone who has the privilege to grant access to others even when the grantor is not the person who created the table.

This command rolls back the database to a specified savepoint that was created beforehand. This allows only certains parts of the transaction to be saved. The savepoint must be specified since the last COMMIT or ROLLBACK command.

DQL commands retrieve data from the database that meet the criteria specified in the SELECT command syntax.

This is the lone DQL command and is used for all retrieval operations. The syntax signals where to search for the requested data by specifying the table name. The WHERE statement indicates the attributes or properties that the target data must meet to be retrieved, such as “WHERE age > 65.”

What Are SQL Data Types?

A well-structured query begins by choosing the correct SQL data types to use when formulating queries. Data types stipulate the kind of value that can be stored in a table column. They fall into six broad categories:

SQL expertise broadens the career options available to data scientists and software developers. These are just a sample of the professional positions that benefit from a background in SQL.

As TechTarget explains, database administrators are responsible for maintaining the entire database environment, as well as:

In addition to developing SQL database applications, database developers also maintain, monitor, troubleshoot, and debug these applications, according to PayScale. Other responsibilities include:

Data analysts tap databases and other data sources to find information that supports the decisions made by business managers, as PayScale describes. Since the majority of business information is stored in SQL databases, the ability to use SQL is an important skill for data analysts. Data analysts typically:

Data application interface developers create and maintain the connections between SQL databases and other applications and systems. Their work links data that resides in relational databases with external business processes via application programming interfaces (APIs). 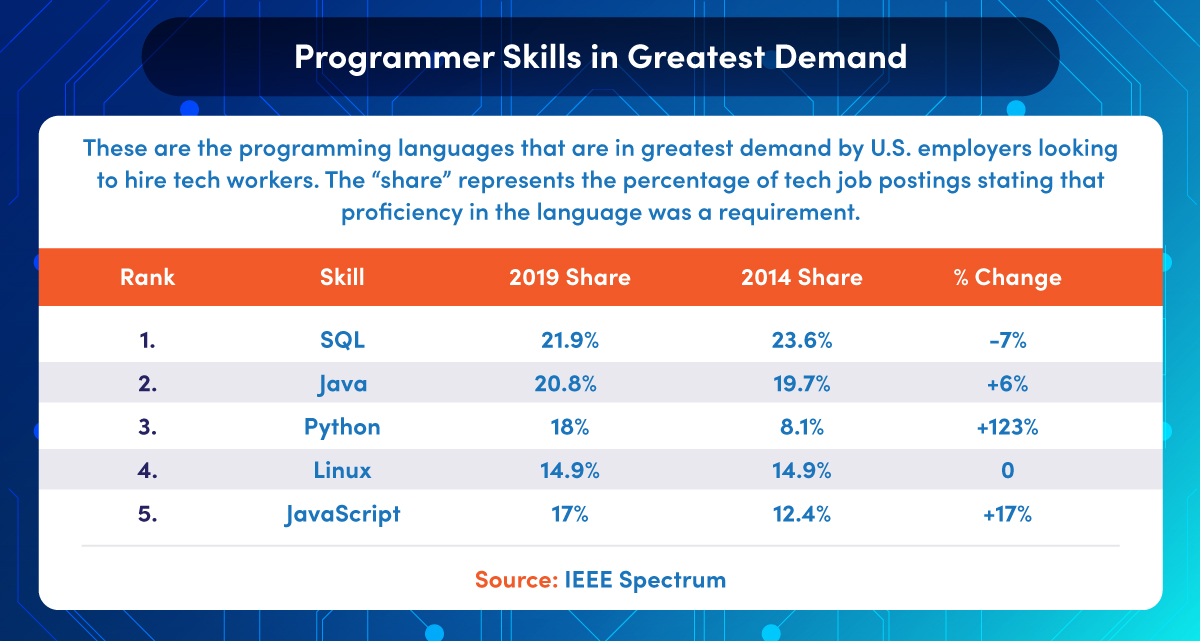 The increasing popularity of cloud databases in organizations creates a need for cloud expertise that can be shared throughout the company. Cloud database experts work as part of teams charged with promoting and implementing best practices and frameworks for the use of cloud services and technologies, as tech employment site Dice explains:

According to PayScale, the median annual salary for cloud solutions architects is around $125,000, which increases to $146,000 annually late in their career. After cloud computing, the most popular skills for cloud solution architects are Amazon Web Services (AWS), Microsoft Azure, system architecture, and enterprise solutions.

The Importance of SQL to Data Scientists and Developers

There is no better way for data scientists and software/database developers to prepare for their careers than by learning SQL. The database language is not only among the most in-demand skills of employers in need of data professionals, it also serves as the springboard for gaining other valuable tech skills. Many lucrative careers in data science and software development are built on a foundation of SQL knowledge.

Towards Data Science, “An Easy Introduction to SQL for Data Scientists”