Society is becoming increasingly focused — and dependent — on technology. We rely more on computer systems and algorithms to manage our lives than ever before, from the Alexa personal assistant that tells us the best route to take to work to the food delivery app that routes dinner to our doors. Most global computer systems rely on massive sets of data to function properly and assist users with their searches, whether they’re seeking traffic information, music, news, or Yelp recommendations. 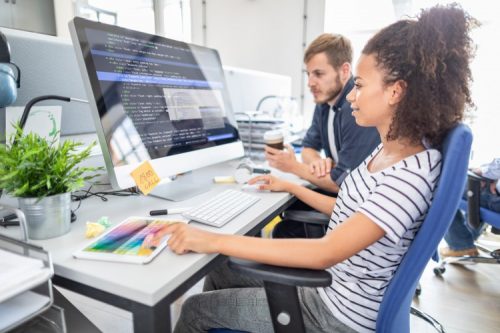 Software engineers and data scientists play a big role in developing our relationship with technology. Both careers require proficiency in computer systems and programming and advanced education, and both offer opportunities in many different industries. Continue reading to learn more about software engineers and data scientists and explore how to prepare for success in either field.

Data scientists are computer professionals who experiment with new technologies and programming. They design experiments that involve data systems, management, security, storage, and other aspects of big data manipulation. They might focus on improving query speed in a large retail network or data security for the federal government. Ultimately, data scientists further many different industries, from food delivery to financial development.

The BLS reports there were 31,700 computer and information research scientist jobs in the United States as of May 2018. The largest employer of data scientists was the government (8,800 jobs, or 27.9%), followed by computer systems and related services (20%), scientific research in physical, engineering, and life sciences (16%), higher education (8%), and software development (5%).

Both software engineers and data scientists are advanced computer technology professionals who need specific training to perform their jobs. Individuals in these fields can come from similar educational backgrounds, such as a bachelor’s degree in data science. Many go on to earn an advanced degree, industry certification, or both. Software engineering and data science jobs exist across many different industries — some of which overlap, and all of which have a need for proprietary software or data management.

While software engineers and data scientists are both computer science professionals with some similarities, they fill different roles. The way they work with data, the industries in which they tend to find employment, and the educational requirements differ between them.

In the course of their work, software engineers might design and program software for managing, storing, and analyzing data, but that’s only a small part of their jobs. They might also program video games, kiosks for ordering at a fast-food chain, or new editing technology for filmmakers.

Data scientists, on the other hand, work only with programs and systems that they (or others) design for the storage, protection, and display of large data sets. Their work prioritizes streamlining and designing ways to read and interpret data, helping companies and individuals make sense of the massive amount of information they have access to.

Software engineers often find employment in companies that have a need for proprietary software or develop software for other industries. That’s why these professionals tend to work for software developers and computer systems designers, software publishers, and finance companies in need of software tailored to their specific needs.

While data scientists must know how to design programs and data software, they can work for employers who have systems in place. They instead focus their work on analyzing and managing large data sets. They experiment with that data to test potential improvements or new approaches to production, distribution, and more. Data scientists are often employed by the government, colleges, and research institutions, in addition to software development firms.

Data scientists typically have an advanced degree, such as a master’s in data science. During graduate study, students expand on what they learned in undergraduate courses, deepening their understanding of the field and learning more about the math and programming at the core of data science.

Alternatively, software engineers can enter the field with only a bachelor’s degree, especially if they have industry certifications that prove their ability to understand and utilize certain programming languages.

Software Engineer vs. Data Scientist: Which Is Right for You?

Software engineering and data science jobs will become more valuable as our reliance on technology increases. If you enjoy focusing your efforts and talents on creating new software and computer programs, software engineering might prove to be a great fit for you. On the other hand, if you want to dive into analysis and spend your time working with raw data, data science might be a better fit.

No matter which career you choose to pursue, the right undergraduate degree can get you off to a good start. Discover how Maryville University’s online Bachelor of Science in Data Science could help prepare you for a job in either field.

Recommended Readings
Building Skills for the Future of Machine Learning

The Future of Data Science and New Skills for Data Scientists

Sources
CoderHood, “A Day in the Life of a Software Engineer”

Dataconomy, “What Is the Real Difference Between Data Science and Software Engineering Teams?”