Every fall, millions of people come together for a sports tradition: fantasy football. They create leagues on websites such as ESPN and Yahoo, spend hours poring over statistics, and carefully select teams in the hopes of winning money and bragging rights. Behind this billion-dollar industry is a complex series of computer systems and software that ensure that leagues across the country run as planned. Deft computer programming allows for accurate statistics, score tracking, player updates, and trade management. The online fantasy football user experience is seamless, but it takes a lot of work for that to happen. Fantasy football is just one example of where software development and programming intersect with our daily lives.

The computer professionals responsible for designing and creating fantasy sports systems –– as well as every other computer program and system out there –– include software developers and programmers. These computer specialists visualize the final product and set out to assemble the code that makes it all happen. Continue reading to learn more about these two careers, their market outlook, what they have in common, and what sets them apart. 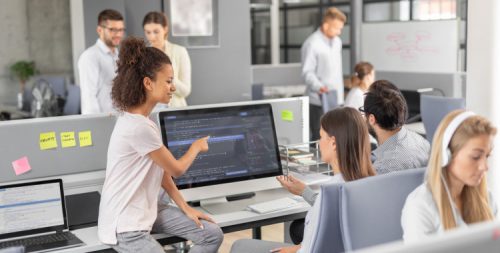 There were 1.37 million software developers in the United States as of May 2018, according to the U.S. Bureau of Labor Statistics (BLS). About 944,000 worked in applications, and the other 421,000 worked in systems software.

The BLS projects the employment of software developers will increase by 21% between 2018 and 2028, which is more than four times the projected national average growth for all jobs (5%).

Computer programmers are coding experts who put together the nuts and bolts of computer software and systems. They write and test code, which is the foundation of computer applications and software, from video games to financial data software. They must have an in-depth knowledge of one or more programming languages, such as C, C#, C++, Python, or Java. Programmers spend most of their day in office settings working with computers. They continually write and test code until it achieves the desired function and aesthetics.

While the BLS expects the job market for computer programmers to drop 7% between 2018 and 2028, largely due to the outsourcing of programming jobs overseas, industries such as electronic shopping, home healthcare services, and outpatient care centers, could see growth in their programming needs.

Similarities Between Software Developers and Programmers

Software developers and programmers are key positions in the software and applications production chain. They’re proficient in programming and understand how software and programming languages function. Those in these positions typically work alongside one another in all sorts of industries, including retail, healthcare, and finance. Jobs in these disciplines are available to those with bachelor’s degrees, though both software developers and programmers can benefit from an advanced degree, such as Maryville University’s online Master of Science in Software Development.

Differences Between Software Developers and Programmers

While software developers and programmers often work together, there are some key differences that set the careers apart. For example, specific skill sets and job duties, such as leadership, project management, and the development of the creative vision, differ between the two careers.

Software developers often serve as unofficial project managers. They come up with big-picture ideas for how to create software and then communicate that vision to the programmers, who do the actual coding. They might help piece together certain parts of the software or coding structures but largely direct programmers on how to execute what they have in mind.

Programmers do not typically take a leadership role in software development. They are the “doers,” using programming languages to achieve the project’s goal. Depending on the project’s size and scope, they might work on a small section or could code the entire program.

Software developers must be creative, developing different ways that programmers can manufacture the software or system that they have designed. They must stay on top of new innovations in software and programming, such as new languages or open-source modules, to design programs that are on-trend and efficient.

Programmers must be creative in the way they troubleshoot problems but don’t necessarily need to develop the core idea of the project they’re working on. They primarily apply programming languages to achieve the results outlined by the software developer. Their creativity is more often used in small tasks. For example, they might use different coding languages to enhance a software’s functionality.

Software Developers vs. Programmers: Which Is Right for You?

Software developers and programmers must have an a background in computer science and a keen understanding of programming languages. They often first develop these skills during undergraduate study and then hone them through work at the master’s level.

If you’re interested in outlining the big-picture ideas that drive creation, software development might be the right fit for you. On the other hand, if you’re motivated by concrete progress and want to apply a nuanced understanding of programming languages to your daily work, computer programming might be a better fit. Explore how Maryville University’s online Master of Science in Software Development can help you take your career to the next level in either of these dynamic professions.

Top Benefits of Being a Software Development Degree Holder

Sources
Forbes, “What Is the Single Most Important Skill a Programmer Needs?”

Houston Chronicle, “Differences Between a Software Engineer and a Computer Programmer”

TechRepublic, “How to Become a Developer: A Cheat Sheet”