Every computer program, web application, and smartphone app has a creative mind behind it.

Students who want to learn about new technologies, create solutions to users’ problems, and work on a wide range of projects may be drawn to software development. From coding websites and optimizing the user experience to developing smartphone games, there are a variety of jobs available in this field.

The demand for software developers likely will continue to rise. According to the U.S. Bureau of Labor Statistics (BLS), the proliferation of new smartphone and tablet apps will lead to a greater need for qualified developers, with software development positions projected to grow by 21% between 2018 and 2028, much faster than the average projection for all occupations (5%).

Individuals who want to pursue this career need to familiarize themselves with various programming languages for software development, including Java, Python, C++, and Scala. Completing an advanced degree program, such as an online Master of Science in Software Development, can provide you with the skills and knowledge to succeed. 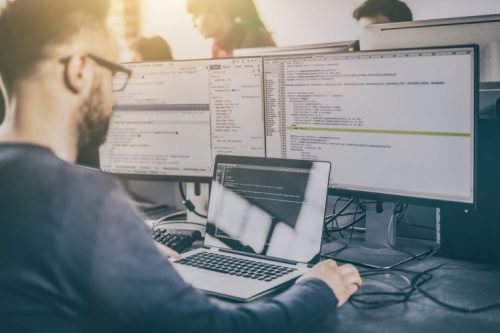 What Is Software Development?

Software development is the process of designing and writing code for computer operating systems, smartphone or computer apps, and non-PC devices. The programming language that a software developer uses depends on the task.

System Programming: Systems programmers design and write system software. For example, they might develop a computer’s operating system, such as macOS or Windows 10. Although Java and Python are great languages for system programming, C++ is the most popular choice.

Application Programming: While systems programmers focus on developing code that maximizes a computer system’s efficiency, application programmers produce code for programs that perform a specific task, such as accounting software, media players, and word processors. Java, Python, and C++ are among the common languages used to create apps.

Embedded Software: Professionals who work with embedded software write code for software used in non-PC devices, such as smart watches, standalone GPS devices, and certain types of calculators. This software operates the device it’s installed on. As with application programming, Java, Python, and C++ are popular choices for writing embedded software code.

A Look at Important Programming Languages

Although there are a variety of programming languages for software development, aspiring developers will be well-served by mastering four essential languages: Java, Python, C++, and Scala.

Java: Java is a general-purpose programming language designed to work on a variety of platforms. For example, it is a popular coding language for the internet, because webpages are accessed by different types of devices. Java is also a popular choice for Android smartphone application development.

Python: Python is a high-level object-oriented programming language, which makes it an excellent choice for web and application development. It’s relatively simple and has a unique syntax that emphasizes readability. According to the Python Software Foundation, Python programs generally run slower than Java programs but are three to five times shorter than an equivalent Java program. This type of code is commonly used to develop websites and web applications.

C++: C++ is an object-oriented language that can be used for both high-level and low-level functions. It has an intermediate difficulty level and can be used for everything from displaying video game graphics to extracting data from large data sets. This universal programming language works on all types of operating systems and can be used to develop any type of software.

Scala: Scala is a newer programming language starting to gain popularity. Compared with Java and C++, it’s relatively easy to learn. According to a recent Lifewire article, “Scala can often be written in a fraction of the number of lines required to write an equivalent function in Java. This has a productivity benefit in allowing developers to do more functional work in a given workday. Fewer lines of code make for easier testing, code review, and debugging.”

Skills Needed to Utilize the Language

Mastering key programming languages is important, but aspiring developers must also have soft skills to ensure they use them optimally. For example, advanced analytical capabilities, creativity, and problem-solving skills are essential for writing and applying code. Additionally, refined communication skills allow developers to effectively update nontechnical co-workers and staff about a project’s status.

Completing an advanced degree program, such as the online Master of Science in Software Development at Maryville University, can help students fine-tune the hard skills and soft skills that software developers need to succeed.

Analytically minded individuals who want to pursue a career in software development can benefit from earning an advanced degree. Maryville University’s online Master of Science in Software Development program not only teaches aspiring developers key programming languages for software development but also helps them hone important soft skills, such as communication and analytical thinking.

The curriculum, which includes courses in programming, object-oriented software architecture, and database principles, emphasizes coding, emerging technologies, and mobile app development. Discover how the online Master of Science in Software Development at Maryville University can prepare you for an exciting, rewarding career.

Beginning the Journey Toward a Masters in Software Development

InfoWorld, “What Is Python? Everything You Need to Know”

Medium, Python: “7 Important Reasons Why You Should Use Python”

Python, “What Is Python? Executive Summary”