The U.S. has the highest incarceration rate and the greatest number of imprisoned people of any country in the world, according to figures compiled by Statista:

Efforts to reduce the U.S. prison population often focus on the possible connection between mental illness and criminality. While such links appear to be tenuous at best, the relationship between mental health and criminal justice is an important factor in keeping people out of prison and reducing recidivism among former prisoners who have a mental illness.

More effective treatment of mental illness is seen as an important component of programs designed to prevent crime. Such programs help ensure that the mental health of defendants and other participants in criminal proceedings is properly addressed by the criminal justice system. 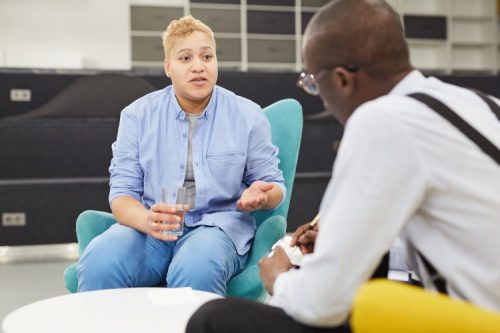 Police and other members of the criminal justice system have become the frontline responders to the growing mental health crisis. This is especially true in low-income communities and for people of color, according to The Atlantic.

The rate of mental illness among criminal defendants has risen along with the skyrocketing rate of incarceration in the U.S. Between 1972 and 2009, the U.S. prison population increased by 700%. Since untreated mental illness is more common among people of low socioeconomic status, they are also more likely to be charged with committing a violent act, whether the crime is related to their mental illness or not.

The first choice of most courts when a criminal case involves a defendant with a serious mental illness is to refer the person to a residential psychiatric care facility, where they can undergo treatment intended to restore their competence. However, placement in these facilities may not be possible, especially in light of the ongoing COVID-19 pandemic, which has reduced the space available for use by prisoners and inmates in need of mental health care.

The open-living arrangements at most long-term psychiatric care facilities have been limited by contact restrictions implemented to deter the spread of the coronavirus. This has reduced the availability of much-needed mental health care for the population in greatest need of professional assistance.

The criminal justice system continues to rely on jails and prisons as the primary providers of much-needed mental health services to criminal defendants and prisoners. This feeds the cycle of released offenders becoming repeat offenders. The Prison Policy Initiative’s analysis of a recent federal study on mental illness in the jail and prison population concludes that incarceration fails to address the social, economic, and health problems of people who are incarcerated.

These study findings illustrate the link between mental illness and an increased likelihood of incarceration:

How Mental Health Impairs the Fair Administration of Justice

The Task Force for Criminal Justice Collaboration on Mental Health Issues has made 137 overall recommendations and 74 implementation recommendations to identify and overcome the challenges in the criminal justice system’s fair treatment of people with mental illnesses. The first of its recommendations calls for collaboration among stakeholders to ensure that mental health services are available to everyone in the community who needs them.

The misperception that people with mental illness are more prone to violence than the general population is in large part the result of researchers focusing exclusively on reports from clinicians who are treating patients in acute care settings. According to a study in World Psychiatry, civil commitment legislation emphasizes the management and treatment of violent behavior, so only those mentally ill patients who are most prone to violence receive treatment in these settings.

However, in nonacute care contexts, patients with the same mental illness diagnoses have much lower rates of aggressiveness and violence.

The Link Between Mental Health and Criminality

The consensus of mental health researchers is that the vast majority of people with a serious mental illness, such as schizophrenia, schizoaffective disorder, and bipolar affective disorder, do not act violently. However, a small number of people with a severe mental illness are prone to assaultive behavior that is often linked to their symptoms, such as paranoid delusions.

By contrast, substance abuse disorders are tied to such acquisitive offenses as theft, burglary, and robbery.

Prevalence of Mental Illness in the Incarcerated Population

People with a mental illness are three times more likely than the general population to interact with police and are more likely to be arrested, according to a report in Health & Justice. They are also likely to have a co-occurring substance abuse disorder.

The National Alliance on Mental Illness (NAMI) reports that people with serious mental illness are booked into jails 2 million times each year.

Resources on Mental Health and Criminality

A defendant’s mental health affects the course of criminal proceedings related to the person’s alleged offense. Simply by entering the criminal justice system, mentally ill arrestees and defendants are put at a disadvantage.

Most mental illnesses do not preclude a defendant from being criminally responsible for their illegal acts. For crimes that require intent or another specific state of mind to be found guilty, a defendant may enter a plea of not guilty by reason of insanity.

All but four states (Idaho, Kansas, Montana, and Utah) allow criminal defendants to enter a plea of not guilty due to insanity. The other 46 states apply one of four legal standards for insanity, or some combination of the standards:

How Mental Illness Is Addressed in Court Proceedings

The 14th Amendment of the U.S. Constitution requires that criminal defendants understand the nature of the charges against them, and that they be competent enough to assist in their own defense.

The insanity defense is invoked in only 1% of all felony cases, and it is successful in only a quarter of those cases, according to Mental Health America. In 70% of cases in which the defense is successful, the prosecution and defense have agreed that it is appropriate before the trial begins.

When a defendant is found to be not guilty by reason of insanity, the person still faces long-term consequences even though they have not been convicted and should not face punishment.

Most interactions between the criminal justice system and people with mental illness involve nonviolent misdemeanors, such as trespassing, loitering, or creating a public disturbance. However, according to Law360, law enforcement officials may lack training in de-escalation techniques that prevent these situations from resulting in felonies that carry harsh penalties, especially resisting arrest or assaults on police officers. Mental Health America’s Debbie Plotnick states that police and other first responders need to understand that a person experiencing a health crisis who calls 911 is not committing a crime.

When a person with a serious mental illness commits a violent crime, it is often related to some other condition or characteristic of the person, such as co-occurring substance abuse, adverse childhood experiences, and environmental factors. The American Psychological Association (APA) points out that violent acts are rare among people with serious mental illness, and when such an act does occur, it is likely that the person has other risk factors for violent behavior.

Most crimes associated with mental illness are “nuisance” crimes such as disturbing the peace, sleeping on the street, or public urination rather than violent acts. In many instances, a person experiencing a behavioral health crisis encounters a police officer whose only options are to take the person to an emergency room or to jail. Preventing nuisance crimes and behavioral health crises from escalating requires ready access to the services offered by trained mental health professionals.

In 2020 the U.S. Substance Abuse and Mental Health Services Administration (SAMHSA) issued an executive order that attempts to help communities improve their ability to care for people who are mentally ill, have a substance abuse disorder, or are unhoused. The goal of the program is to reduce the dependence of communities on the criminal justice system as a safety net that in turn relies on incarceration.

No Connection Between Mental Illness and Violence

Much of the population has the erroneous impression that people with mental illness are more likely to commit crimes, but the data analyses suggest otherwise. The aftermath of horrific crimes such as mass shootings promotes the image of “crazy” people committing violent acts. In fact, research suggests that people with serious mental illness are more likely to be the victim of a crime than to perpetrate a violent crime, according to the World Psychiatry study.

Much depends on the context of the interactions between police and mentally ill individuals that involve violence. This has led communities to explore alternative approaches when responding to incidents of people in mental health crises threatening their own safety and the safety of others.

Early identification and treatment of concurrent substance abuse disorders and mental illness would serve to deter incidents of violence that lead to encounters between people with mental illness and law enforcement.

Beginning in the 1990s, courts began programs to divert mentally ill individuals to mental health courts to take them out of the criminal justice system as early as possible.

Resources on Alternatives to Criminal Proceedings for Mentally Ill Defendants

Striking at One of the Root Causes of Mass Incarceration

Efforts to reduce the U.S. prison population depend on innovative programs that replace punishment by incarceration with policies that address the socioeconomic and health-related causes of crime. The high number of people with mental illness in U.S. prisons and jails is a result of our failure to provide mental health services to populations in communities at greatest risk. An approach to community mental health that emphasizes prevention and ready access to treatment will improve people’s lives and make our communities stronger and more resilient.