How Technology Has Changed Communication

Since the earliest applications of the printing press, journalists have used the written word to share news about political affairs and public interests, reports of war and corruption, comics, editorials, obituaries, classifieds, and horoscopes. In time, newspapers evolved into a medium that enlightened, educated, and entertained. Johannes Gutenberg’s printing press of the 15th century laid the blueprint for printing technologies for hundreds of years, but the love affair with and thirst for news in print have been gradually changing since the 19th century, and as the ways we consume news have evolved, so has the public’s relationship with the media.

With innovations of the printing press by Jonas Booth and Richard Hoe, the printing press went from horsepower to steam-powered to the cylinder rotary of the mid-1800s. Also around that time, it became cheaper to make paper, as wood pulp replaced linen as the main ingredient in papermaking. With a dramatic reduction in printing costs, publishers could easily envision printing a more affordable newspaper for a broader demographic. Thus, the penny paper was created. James Gordon Bennett and Benjamin Day pioneered this shift toward cheaper, more widely accessible print media. Before the penny paper, newspapers only reached a small sliver of the population. As circulations grew, newspapers adjusted their content to give people the information they wanted, including more information about crimes, scandals, and sports. Faster printing and cheaper paper meant that more of the public had access to an inexpensive means of receiving messages from a host of different voices through print. 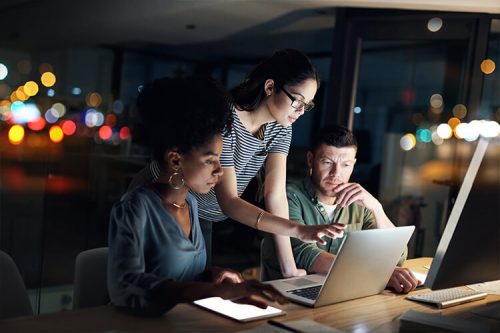 From Print to Digital

As technology advanced during the 20th century, the format and design of the newspaper saw remarkable changes. The telegraph made way for the rapid gathering of information through computer networks, digital pagination replaced the “hot type” method of putting the news into print, and color ink and graphics technology provided more rich and vibrant material for printing. However, the most industry-changing technological innovation to come along by far has been the Internet, which has dramatically altered how the news is reported, viewed, and consumed.

The Internet has been a great tool for news collection and distribution, but this has had a tremendous effect on the circulation of print media, with newsrooms slashing payrolls and journalists lamenting that “print is dead.” As publishers scramble to bolster declining ad sales, which make up the bulk of many publications’ revenues, readers are increasingly left unsatisfied by print products or opting to get their news from cheaper online sources.

Seeking Engagement in the Era of “Fake News”

At the dawn of the 21st century, traditional journalism seemed to be yielding ground to less-objective, more public-interest-driven content, with falling circulation figures leading to a panicked scramble to “give ’em what they want.” While editors traditionally have a gatekeeping role, ensuring that stories published are accurate and objective, Web content creators and bloggers often have no such scruples, and the results can sometimes bring increased readership and reader engagement.

As blatantly partisan outlets have emerged and drawn large numbers of readers and ad revenues, the credibility of the media has slipped. But there is a sense that the tide may be turning as some readers get fed up with “fake news” and seek out objective, informative news coverage from trusted publishers. However, many of these outlets have struggled to get enough readers to pay for online and/or print subscriptions, which are needed to ensure their viability.

A History of Journalism in the 20th Century

A Brief History of Truth in Journalism

The Future of Journalism

Digital May Be the Future, but Print Looms Large in the Present

The Intersection of Journalism and Technology

Journalism in the Americas

The Future of Journalism and Free Speech

Truth, Trust, and the Future of Journalism

Big Data and the Future of Journalism

Communication Technology and the Evolution of Knowledge

“Paywall” to “Membership” Will Require a Massive Culture Shift

The History of Communication Media

The Transition to Digital Journalism