The world of technology is shifting, evolving, and adapting to global market trends faster than ever before. According to a Forbes article, many senior technology executives are predicting big changes in software development in 2019, such as multiplatform user interface (UI) development, native analytics modules, AI-first development, and human behavior modeling. 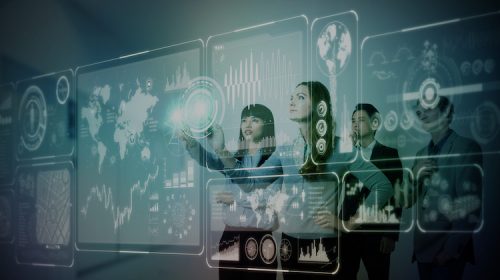 According to the U.S. Bureau of Labor Statistics (BLS), software developers have a strong job outlook. The job growth rate for the profession is expected to rise by 24 percent — more than three times as fast as the average for all occupations — between 2016 and 2026. That’s 302,500 jobs that are expected to open up for software developers across the country.

Yet, software developers aren’t the only computer-related professionals advancing rapidly. According to the BLS, computer and information technology (IT) occupations of all kinds, such as computer and information research scientists, computer network architects, computer systems analysts, and computer programmers, are expected to increase by 13 percent over the same decade, 2016–2026. That’s a gain of 557,100 jobs. The BLS notes that this increase may be due to a greater focus on cloud computing, big data, and information security. Regardless of the impetus, the future of programming looks bright.

To adapt to these shifts and evolutions within the IT and computer industries, you may need to acquire additional skills through an advanced education program. For example, an online master’s degree in software development program can provide you with the means to develop skills in the top 10 programming languages of the future, UI design, agile systems, and development and operations (DevOps).

Trends in the Future of Programming

To help you gain a better understanding of where IT- and computer-related jobs are headed, several trends in the future of programming are examined in the following sections, along with the skills that software development professionals need to adapt and stay on the cutting edge of their fields.

Programming Languages of the Future

The programming languages of the future are Go, Kotlin, Python, TypeScript, R, Scala, Swift, Rust, Ruby, and Haskell,as reported by TechRepublic. Proficiency or advanced skills in these programming languages would elevate a professional’s technical abilities and potentially open up more opportunities when looking for jobs.

While highly sought after by employers, some of the programming languages are actually pretty obscure. For example,  Go and Scala are among the highest-paying programming languages due to the small number of qualified professionals specializing in each language. Go is defined in a Forbes article as an “open-source compiled, statically typed language in the tradition of C” while Scala is a “general-purpose, functional, and object-oriented language compatible with Java.” Go was designed at Google and is used not only there, but also at Adobe and Facebook. Meanwhile, Netflix, LinkedIn, and Twitter use Scala.

As technology has progressed, so have the devices people use to connect to the world, like smartphones, tablets, laptops, and even smartwatches. Each of those products has software developed for it. Companies want to place their apps on as many platforms and devices as possible, and thus programmers need to choose the right language for developing across multiple platforms.

The demand for cross-platform development is high and getting higher. Forrester reports that over 60 percent of companies already use cross-platform development, and that number is expected to increase due to device proliferation. According to TechBeacon.com, programmers need to become well-versed in cross-development applications: Adobe, Xamarin, Appcelerator, iFactr, Kony, SAP, Alpha, 5app, FeedHenry, and Sencha.

Programmers can use AI techniques, such as machine learning and deep learning, to develop software for network security. As time goes on and technology evolves to such an advanced degree, AI may be the only realistic way to deal with the consequent cybersecurity threats. These concerns are why the tech industry is hiring professionals with advanced AI technology knowledge to protect its company assets.

According to an ESG article, machine learning technologies can be either “applied to existing security defenses as helper apps” or “work on a stand-alone basis coupled with other security and analytics technologies.” To stay ahead of the big changes AI will bring, programmers and developers need to ensure that they have the skills necessary for success, such as knowledge of AI, machine learning, and cybersecurity analytics.

Prepare for a Career in the Future of Programming

Technology’s rapid progression indicates how important it is for professionals in the IT and computer industries to constantly update their coding, development, and design technology skills. Learn more about the programming languages of the future, cross-platform development, and AI applications explored by Maryville University’s computer science degrees and accelerate your preparation for future success today.

Forbes, “15 Predictions for the Next Big Thing in Software Development”

Forbes, “The 2 Highest-Paying Programming Languages You (Maybe) Never Heard Of”