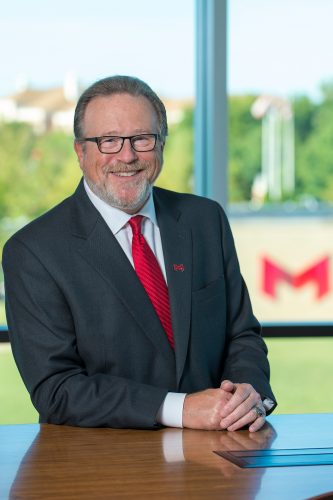 In the wake of a highly publicized federal investigation into college admission, there’s renewed focus on inequity in the entry process. But the national approach to college admission is evolving — and Maryville University is ahead of the curve.

Dr. Mark Lombardi, president of Maryville, spoke recently on the admission scandal, discussing the future of college entry, the viability of SAT and ACT scores, and Maryville’s philosophy on accessibility.

“The reality is, every young person, if given the opportunity at different colleges and universities around the country, can be successful,” Dr. Lombardi said in a recent appearance on the Carney Show with Jim Carney.

Less opportunity in college admission can lead to more corruption

The federal investigation, codenamed “Operation Varsity Blues,” implicated some 50 people on charges of fraud and bribery aimed at gaining admission to upper-echelon colleges and universities.

“It’s unethical. It’s wrong on every level. And quite frankly, it denigrates those institutions that were involved.”

Acts included paying bribes of up to six or seven figures to admission offices, falsifying standardized test scores, and lying about participation in extracurricular activities, among other things.

The investigation also alleges involvement and complicity of officials from prestigious, high-profile colleges and universities including Yale, Stanford, Georgetown, and the University of Southern California.

“What surprises me, and I think surprises all of us, is universities taking this money to alter and affect admissions,” Dr. Lombardi said. “It’s unethical. It’s wrong on every level. And quite frankly, it denigrates those institutions that were involved.”

Dr. Lombardi suggested that colleges and universities can disincentivize this sort of criminal or fraudulent behavior by creating more pathways for accessibility. He said colleges should stop defining their prestige by the number of students they reject, and instead focus on the ways they help students achieve their personal, educational, and professional goals once admitted.

“Every study shows that SATs and ACTs have no correlation to collegiate or career success.”

“Access and opportunity should be the most important thing at any college or university,” he said. “For a hundred years, we’ve ranked schools based on how many students they don’t let in. These schools [associated with the college admission scandal] go around bragging about how many students they denied entry because they think it makes them better. The reality is, the only real way to measure the success of a university is what are your graduates doing, and how do they contribute to society once they graduate?”

When students aren’t so focused and reliant on test scores as a central admission factor, then there’s less reason for parents to lie or falsify documents on their children’s behalf. And Dr. Lombardi argues that test scores should carry little or no weight in the admission process.

“Every study shows that SATs and ACTs have no correlation to collegiate or career success,” he said. “In fact, let me give you an idea of the universities that don’t use SAT and ACT anymore because of that fact: Maryville University, Cornell, Bates, the University of Chicago, New York University, Iowa, Wake Forest, Smith, Brandeis — there are over 400 schools today, most of them outstanding, that don’t use SAT and ACT scores for admission anymore.”

A future in college admission based on inclusion, not exclusion

Dr. Lombardi predicts that factors like standardized test scores won’t be used in their current form within the next decade or so. Instead, he believes the majority of students will excel if just given the right opportunity, regardless of metrics like test scores.

“[The future is] about access and opportunity, particularly to first-generation students, students of color, students from underrepresented groups — that’s really the way universities should be measured from here on out.”

“That’s why [Maryville is] the fourth fastest-growing university in the country in terms of enrollment: because we have made a lot of those changes,” he said. “And we are thriving.”

When colleges and universities are preoccupied with their own reputations, it opens the door for dishonest behavior during the admission process. That’s why a university’s obligation should be to its students first, Dr. Lombardi said.

But he sees a unique opportunity for colleges and universities to use this scandal as a lesson and to improve their admission processes and practices for the future.

“I think the future of higher ed is not about exclusion, which is what this story is really about,” he said. “[The future is] about access and opportunity, particularly to first-generation students, students of color, students from underrepresented groups — that’s really the way universities should be measured from here on out.”