In the early days of computing, programmer and coder referred to the same job: someone who could command a computer to do things. However, the business world has redefined the two fields, separating programmers and coders. Both are necessary in any company interested in application development, and businesses that maintain custom-coded apps are key employers. So, where does the split of coding vs. programming stem from? 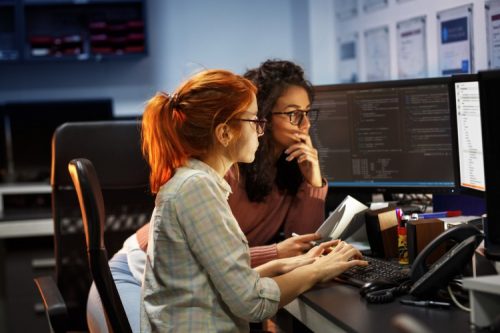 Coding is the art of writing computer code that will compile and run to produce a desired output if given a valid input. Coders might be involved in directly using computer languages but might also use other structures, such as HTML or CSS. They put code into compilers and are responsible for producing scripts that can perform a given task.

Coders usually know a number of different languages and can port code between them. A coder can recode an innovation developed in an uncommon or outdated language into something that can be added to contemporary languages. Since application development usually depends heavily on reusable code, this skill is priceless to the industry. Additionally, knowing many different languages allows a coder to see flaws in a particular language and determine how to make a process more efficient.

Programmers develop abstract solutions to a problem and then create an application to solve it. They may also have to write code, but instead of focusing on whether a particular snippet works, they focus on the overall product. Often, programmers import code snippets from multiple sources or outsource fragments to coders to work on independently. The ability to do so frees them up to focus more on an application’s viability.

While most people who learn to code can write decent programs, they usually don’t challenge themselves to solve larger problems. Programmers use the logic skills developed as coders to solve a specific problem. While a coder is usually satisfied as long as his or her code successfully compiles, a programmer’s code must be immaculate and readable and do what it’s supposed to. Most professionals who start their careers as coders find work as junior programmers.

What Are the Differences: Coding vs. Programming

When discussing coding vs. programming, a handful of apparent differences are evident:

Coding deals primarily with being able to communicate with a machine. By writing code, the coder can “talk” to a computer to get it to perform an action. Conversely, programming seeks to utilize code to synchronize human inputs and machine outputs after data is processed. It attempts to solve a problem through the strategic application of code.

Coding is a relatively simple enterprise. Languages have syntax, and if coders follow the rules, they will have something that works. Programming is more complicated: In a single application, a programmer must handle multiple inputs, process incoming stimuli to produce output, send that output to the user, and await a response.

Coding is a subset of programming. Coders learn how a language works and use it to perform actions that dictate basic logic. Programmers put snippets of code together and write bridging code that makes those snippets work cohesively. They aim to build something that allows a user to communicate with a machine and vice versa, creating a conversation rather than a command structure.

Coders are mostly concerned with getting their piece of code to work. Once the code compiles, they can move on to write the next snippet. Programmers consider the broader context of a snippet, checking code after they write it and debugging, testing, and implementing it.

How Are the Fields Similar?

Coding and programming have considerable similarities, but while all programmers are coders, not all coders are programmers. For example, they overlap in the following areas:

Key to the Final Product

Coders and programmers represent a crucial element of software development. Coders create code in one language as a subset of programming. Programmers are responsible for overseeing a project and stringing different snippets of code together into a viable, marketable product.

Computer languages and the process of putting together applications evolve as better, faster, and more efficient methodologies come to light. Coders and programmers must stay aware of the changes in their field. Sometimes, a minor addition to a programming language can cause a severe bug or render a piece of code unusable. Platforms for development also change, and while the aim is to create a better coding experience, sometimes it forces professionals to rewrite code to stay up to date with industry standards.

Core competencies in these fields are similar. Programmers and coders both need communication, technical, and analytical skills to make an impact. The Maryville University online Master of Science in Software Development allows future programmers or coders to hone all of these skills and more.

Why Enter the Field of Software Development?

Software development has considerable promise and room for growth. Many businesses have already recognized the need for in-house programmers and coders to perform specific tasks. While the BLS doesn’t separate the positions in its data, software developers, which can encompass both, made a median annual salary of $105,590 in 2018. Growth in the field is expected to be very strong, with an increase of 21% predicted between 2018 and 2028.

As more companies move business operations online and more of the developing world embraces information technology, programmers and coders will continue to be in demand. Don’t hesitate to explore Maryville University’s online Master of Science in Software Development to learn the tools and skills that will help you stand out in the field.

Recommended Readings:
The Future of Programming and the Top Languages Programmers Should Know

Top Benefits of Being a Software Development Degree Holder

Sources:
Devskiller, “Coder vs. Programmer: How to Tell the Difference for Recruitment”

Entrepreneur, “#3 Reasons Why Everyone Should Learn Programming”

The Guardian, “Rise of the Machines: Why Coding Is the Skill You Have to Learn”

Lifewire, “What Is Programming? Is It the Same as Coding?”

TechRepublic, “Programming Languages: Which Was Most Popular Each Year?”