In animation’s early days, artists used pencil, paint, and paper. Today, the growing use of digital tools opens up new and exciting opportunities for artists.

Digital artists seeking to enter the global animation industry, valued at $264 billion as of 2019, have many career options. Creative disciplines in the field include film, virtual reality, animated character design, game design, and education. 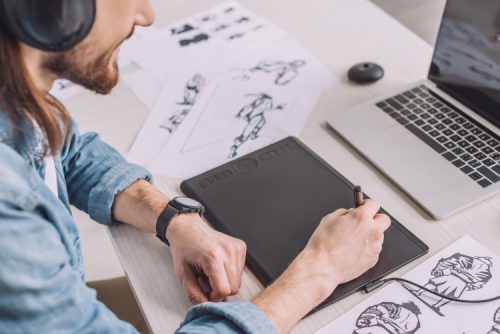 Digital artists can also work in many types of animation, including 2D and 3D animation, motion graphics, and stop motion. This guide explores the top animation tools and software, discusses animation history and its impact on society, and introduces the steps to becoming an animator.

Below are a few examples of resources for digital artists seeking more information about the animation industry and careers.

Animation is the process of transforming still images into moving images. When still images are displayed rapidly on media, such as film or video, they create the illusion of motion.

Animators are digital artists with competencies that include conceptual design, drawing, creative development, and curiosity. They also use animation tools and software. The following list offers a glimpse of the tools animators use:

Animation History and Its Impact

In the early 1900s, the United States experienced significant shifts in the labor market, the economy, politics, and society. These shifts changed the U.S. role on the international stage and helped fuel attitudes that were reflected in animation of the period. Examples include the following:

Animation production often involved clay figures and puppetry. For example, an animator would take a picture of a clay figure, move it a little, and then take another picture. The process was repeated hundreds and thousands of times until an animator had achieved the targeted amount of film. Then when the images were played back in rapid succession, the viewer perceived the clay figure as moving. This process is an early form of stop motion animation, a technique also used in filmmaking in the early 20th century.

The history of stop motion in animated films dates back to 1898 with “The Humpty Dumpty Circus.” One of the most famous examples of early stop motion animation technique, “A Trip to the Moon,” was released in 1902. The plot involved astronomers building a space vessel that, when launched, hit the “man in the moon” in the eye.

The close connection between animation and newspaper comics was reflected in the use of pen drawings. For example, a newspaper comic strip dating from 1897 called “The Katzenjammer Kids” inspired the animated film Policy and Pie, which featured original characters from the comic strip.

As in modern times, animation impacted consumer culture. For example, Keeping Up with the Joneses, created in 1915, was an ad for a fashionable men’s hat.

Animation also supported war efforts. W.S.S. Thriftettes, an animation created around 1918, was an advertisement for war savings stamps: certificates that raised funds for the U.S. military during World War I.

By the 1930s, Disney animators pursued more realistic animations. Their work paid off with the animated feature Snow White and the Seven Dwarfs. This beloved movie revolutionized both the animation and film industries as the first full-length animated feature ever presented in color and with sound. It became the top-grossing film of 1937. With it, Disney established itself as the standard-bearer in animation, a title it still holds today.

In 1981, Disney animators published the book The Illusion of Life: Disney Animation, which featured the 12 principles of animation that serve as the foundational building blocks for animators. Examples of these principles include the following:

Modern animation plays a key role in entertainment, especially in the cinema. What makes great animation? It’s in the eye of the beholder; everyone has different opinions on a favorite animated film. However, as with any great film, an animated movie achieves a balance and harmony. It combines artistry, colors, content, movement, timing, music, and more to transport viewers into the film and its emotions.

Here’s a list of recent popular animated movies that advanced the development of modern animation technologies and creative processes.

Animation also plays a crucial role in education. When incorporated into presentations, coursework, and training, animation offers a tried-and-true method to teach and engage both children and adult learners. Here are some resources about animation for informational and educational purposes.

The New Yorker, The Surprise and Wonder of Early Animation

How to Become an Animator

Are you interested in becoming an animator? Animation is an exciting career in which people with an artistic eye, who are naturally curious, and who are passionate about creating can thrive. There are four essential steps to prepare for a career in animation.

From storyboarding — a way to organize illustrations in a sequence — to putting the finishing touches on a special effects segment of a high-action movie, digital artists can use their art, design, and creative skills to develop animations in both animated and non-animated feature films. They can also add animated elements in an effort to make videos go viral on social media and create animated content for websites, teaching tools, and business presentations.

Aspiring animators would do well to start by checking out the different types of animated media, with their personal and professional interests in mind. They should also know about the typical tasks of an animator, including the following:

Digital artists and animators are creative professionals, so artistic skills are essential to the role. Artistic talent comes in various forms. Some digital artists have strong drawing skills. In contrast, others are wizards with digital animation tools. Skills in both art and technology are essential.

What if you’re a creative person with a knack for art, but you need to hone your technical skills? Consider taking advantage of the free open source animation tools available in the market, like some of the animation software previously mentioned in this article. Aspiring animators should also look for opportunities to strengthen the core competencies in the following sections.

Artistic talent is essential for working as an animator. However, this talent may come in various forms — drawing, conceptualizing, or editing using software, for example. As for creativity, this skill isn’t just about coming up with great ideas; it’s also about finding creative solutions to problems.

One only has to look at the final credits of a full-feature animated film to see that animation can require a huge group effort. For animators, this means that communication skills are crucial for effectively collaborating, interacting, and listening to others.

An animator who knows how to use software tools can take an idea and bring it to life. Animators with strong technical skills are highly competitive in the market.

Animation can be a lengthy, complex process involving managing numerous creative projects, each with thousands of still images. The ability to effectively use and manage time can help animators optimize their creativity while ensuring that they meet deadlines.

Step 3: Invest in Your Education

Self-training can go a long way to improving the skills of individuals pursuing an animation career. The free animation tools presented in this guide allow aspiring animators to gain new skills.

Additionally, a college education in digital media helps aspiring animators compete in the job market. For example, a bachelor’s degree in digital media can develop students’ raw artistic talent and creativity and help them gain proficiency in advanced animation software and tools, including 2D and 3D applications.

Common career paths for aspiring animators include junior-level design or animation roles. In the early stages of their careers, much of the work may be administrative. For example, they may support a senior animator by answering phone calls, setting up meetings, or preparing documentation for creative meetings. The insights gained in administrative roles and the relationships formed at this phase in an animator’s career are crucial for developing professional skills, such as teamwork, communication, and problem-solving.

As more opportunities to contribute to animation projects arrive, individuals must keep track of their work contributions. Gathering and organizing their work allows them to build a portfolio that proves their skills and experiences, opening doors toward advanced and senior roles.

Animators have the foundational digital, art, and creative skills to take on any number of roles, including art director, multimedia artist and animator, and graphic designer. According to the U.S. Bureau of Labor Statistics (BLS), the median annual salaries for these roles as of 2019 are as follows:

With constant new technological developments, aspiring animators benefit from learning the commercial and open source animation tools and software presented in this guide. Formal education, such as a bachelor’s degree in digital media program, provides individuals with up-to-date skills and knowledge about best practice approaches to animation from experts. As for employment opportunities for animators, the BLS projects 4% growth from 2018 to 2028.

The animation industry is a fast-paced, competitive field. Employers seek animators who are creative, artistic, focused, attentive, and willing to work long hours sometimes. If you want to bring static images and objects to life and create compelling stories, memorable characters, and exciting worlds, consider an animation career.

GoodCore Software, “15 Types of Animation and Best Animation Software for 2020”

Trill Magazine, “How Animation Has Impacted Our Society”