What Is a Computer Programmer?

Computer programmers have a hand in forming our future. Programmers make possible the everyday technologies that are pertinent to our lives, such as the internet, e-commerce, and social media. Our smartphones, apps, and fitness trackers would not function properly without programmers.

We count on computer programmers in our digital age to connect us and make our lives easier. The world needs qualified programmers today and in the future to continue to enrich our lives.

What is a computer programmer, exactly? Computer programmers write the code that allows software and applications to work. They serve as a vital component of our digital evolution. A bachelor’s degree in computer science with an emphasis in software development gets you closer to contributing as part of this popular career. 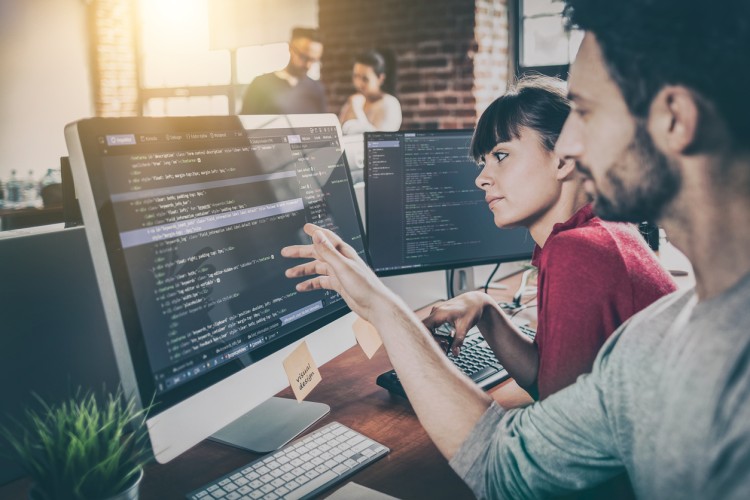 The Importance of Computer Programming

Even before the internet, computer programmers played an integral part in transforming ideas into functional concepts. The computer programming field has come a long way since Fortran and Cobol debuted in the 1950s.

Growing internet use and the proliferation of the internet of things (IoT) underscore computer programming’s importance. Approximately 59% of the global population actively uses the internet, according to DataReportal; China, India, and the U.S. have the most prolific users. The internet connects us through a web of computer networks that enable us to communicate, work, research, make transactions, and play.

Educational institutions and workplaces are also looking to prepare the next generation of coders for the more rigorous programming needs dictated by rapidly developing technologies, such as voice recognition and artificial intelligence (AI). Primary and secondary schools are touting the importance of adding coding as an essential part of education and as another foreign language choice

Computer programmers are part of our modern workforce. Those who code often work full time writing programs in various computer languages, according to the U.S. Bureau of Labor Statistics (BLS). These professionals tend to work independently as part of a larger development team.

According to the BLS, organizations involved in computer systems design and related activities employ 38% of computer programmers. A small percentage of programmers are self-employed.

Due to the nature of their jobs, computer programmers can work practically anywhere as long as they have a strong internet connection and a computer with a fast processor for optimum speed and performance. Application development and computer programming skills translate well to remote work, according to Forbes.

As more organizations extend the work-from-home (WFH) option to employees, companies can broaden their talent search beyond their local market. Telecommuting is a boon for professional coders. With commute distance no longer a key factor, working remotely allows computer programmers to live in more desirable locations.

A unique aspect of working as a computer programmer is that a skilled coder can remain in one position for their entire career, programming at the expert level in a single programming language. For those who are looking to transition into complementary roles, similar industries include computer and information systems, computer network architecture, and information security, according to the BLS. Programming is also a perfect springboard for transitioning into roles in application development, application architecture, and systems integration.

The Role of the Computer Programmer

Computer programmers connect all facets of life. Those who write code are the cornerstone of software and application development. Code is a computer’s fuel.

The computer programmer’s role is to bring to life what users want. The best answer to “What is a computer programmer?” is that these professionals focus on writing and testing code to ensure that software and internet applications function properly. Programmers master computer languages such as Java, C++, Perl, and Ruby, among many others.

Computer programmers can write new code in a programming language or take the time to update or fix previously written code. Their job requires patience and problem-solving skills. When a software program or application is not functioning properly or has a bug, programmers must debug it by finding errors and fixing them with code.

Before software and applications move to a production environment, where users experience them, a programmer’s code is handed off to other development team members, such as an application or a system architect and a quality assurance (QA) tester.

Because both computer programmers and systems or application software developers can develop operating systems and computer applications, their roles can overlap, according to the Houston Chronicle. Entry into software development requires a bachelor’s degree in software engineering, computer science, or a related field. Computer programmers need a computer science degree, but in some cases, an associate degree is acceptable. The biggest difference between programmers and developers is that developers typically do not write code. Developers need to be familiar enough with programming languages, however, to communicate with programmers.

Aspiring computer programmers who are looking to cultivate the skills needed to excel in a code-writing role should consider Maryville University’s online Bachelor of Science in Computer Science program.

Explore a Future in Computer Programming

Whether you are looking to make the world a safer, more connected place by embarking on a career as a computer programmer or are fascinated by the concept of programming languages, you can benefit from discovering more about Maryville University’s online Bachelor of Science in Computer Science program and its software development concentration.

Bloomberg, “Robots Are Coming for Jobs of as Many as 800 Million Worldwide”

Education Week, “Coding as a Literacy for the 21st Century”

Forbes, “Coding and Empathy: Foundational Skills for the Future of Work”

Forbes, “The Benefits and Challenges of Working with Remote Employees”

Houston Chronicle, “Differences Between a Software Engineer and a Computer Programmer”

ZDNet, “Know Python language and Up for a ‘Hardcore’ Coding Test? Get in Touch, Says Tesla”