Promising Careers in Data Science: How to Become a Java Programmer

In the tech world, decades are an eternity. But more than 20 years after its introduction in 1995, Java continues to be one of the hottest computer programming languages in the world, trusted by household-name companies such as Google and Amazon.

The programming language and computing platform begins with English-based commands, instead of numeric code, to develop computer instructions. Known for attributes such as flexibility and reliability, Java is the programming language of choice for many organizations’ applications and websites. It’s the driver for everyday items, including:

Java’s many uses and enduring popularity keep its programmers in high demand. How do you become a Java programmer? And, with millions of Java programmers worldwide, how do you make sure your education and skills stand out? Earning a bachelor’s degree in data science is one step that can help you achieve your career goals.

What do Java programmers do?

The U.S. Bureau of Labor Statistics (BLS) describes computer programmers and software developers as professionals who write and test code for applications and software. They must not only understand Java but also be able to code the computer programming language to produce specific outcomes — and their work doesn’t end with development.

A Java programmer’s job includes designing, writing, and testing Java-based applications. What happens after software or an application launches is just as important: Java programmers then maintain the source code they developed. They’re troubleshooting, debugging, and upgrading systems long after they help create them. 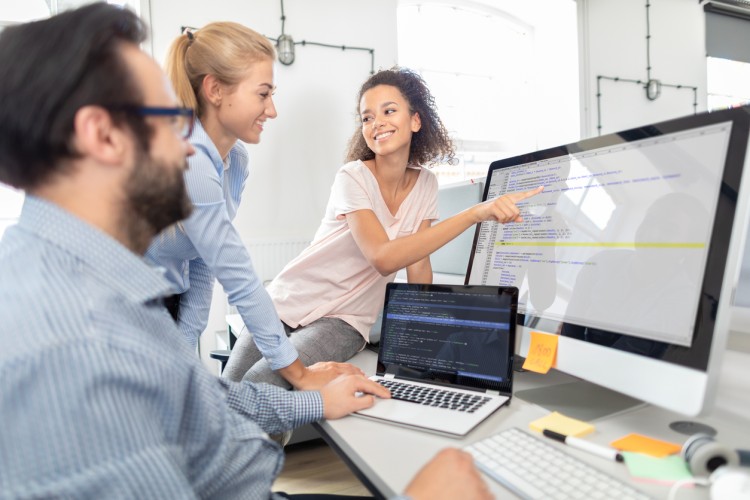 Java has amassed a large community of programmers and developers to create reference materials and best practices for using the platform.

The Java Virtual Machine (JVM) anchors the programming language’s performance, with features that were groundbreaking when introduced and remain valuable today. Using bytecode from a Java compiler, the JVM allows Java to run on any device or operating system — a concept known as “write once, run anywhere.”

The ability to use Java on all platforms, with memory that a programmer doesn’t have to manage, helps set the programming language apart. And, with its ability to manage more than one thread of execution at once, Java allows for enhanced interactivity and responsiveness.

Becoming a Java programmer can lead to opportunities in a variety of jobs — from entry-level positions that center on programming to higher-level roles that focus on design lead and management. Java programmers work in corporate, government, and nonprofit settings and in different capacities:

Those who specialize in writing code for specific types of services — back-end or Android development, for example — can seek more specialized roles within the Java programming arena.

How to become a Java programmer

Java programmers work with a leading programming language in roles that can take them from project brainstorming to system maintenance, but what’s the path to get there? How do you become a Java programmer?

Lifelong learning is a key to standing out among Java programmers; those who keep up with ever-changing technology and Java’s newest features can position themselves as leaders among their peers. A focus on developments such as Java 8 and JDK10, as well as JVM languages such as Kotlin, Scala, and Groovy, can help keep Java programmers a step ahead of the competition.

With responsibilities that can include any part of the development project, a Java programmer should have strong skills in analysis, communication, problem-solving, creative thinking, and business. Great programmers also share the following characteristics:

Businesses and organizations often hire Java programmers for critical software projects. The demand for Java programmers likely will continue to be strong, thanks to Java’s popularity and the growing need for mobile applications and industry-specific software.

While salaries vary based on work experience, education level, geographic location, and other factors, PayScale.com lists the median annual salary for Java programmers at around $75,000 as of September 2020. Although the BLS doesn’t separate out by programming language, it reports that the 2019 median annual salaries for computer programmers and software developers were $86,550 and $107,510, respectively.

Data science professionals will continue to play an important role in developing and maintaining programs and applications for the world’s diverse needs.

The BLS projects that jobs for software developers will increase by 22% between 2019 and 2029. The increasing appetite for new applications for smartphones and other devices will drive that demand. While the BLS anticipates a decline in U.S. computer programming employment for that same period, it also notes that decline could be offset by companies’ decision to bring overseas programming positions to the U.S.

Programmers with at least a bachelor’s degree and knowledge of a variety of programming languages will be in the best position for career success. Many Java programmers go on to learn newer languages such as Python and R.

Take your next step toward Java programming

Ready to claim your spot in developing innovative solutions for applications and software? Maryville University’s online Bachelor of Science in Data Science can help you make that happen.

Through a degree program focused on programming — along with business skills and other tools you’ll need for success in Java programming and beyond — Maryville will help prepare you to conquer the challenges of our digital world.

The Most Popular Programming Languages and Their Applications

What Is a Data Science Major, and What Can You Do with It?

Business 2 Community, “7 Tips to Become a Great Java Developer in 2019”

CareerExplorer, “What Does a Computer Programmer Do?”

InfoWorld, “What Is the JVM? Introducing the Java Virtual Machine”

Java, “What Is Java Technology and Why Do I Need It?”

Javarevisited, “10 Tips to Become a Better Java Developer in 2020”

Scalable Path, “7 Qualities That Differentiate a Great Programmer from a Good Programmer”

ThoughtCo., “What Is Java?”

Tosbourn, “What Kind of Jobs Can You Get with Java Programming Training?”