What Is Social Psychology? Definition, Key Terms, and Examples

Psychology as a field of scientific exploration remains relatively new; the first formal psychology course in the United States was initiated at Harvard University by William James in 1875.

Yet its importance as a discipline is clear from the well-known names and concepts of early 20th century research into human behavior: Pavlov and his salivating dog, Maslow’s hierarchy of needs, Jung’s archetypes of the unconscious.

These and other researchers wanted to uncover how human perceptions — of themselves, of others, and of the world at large — influence behavior. 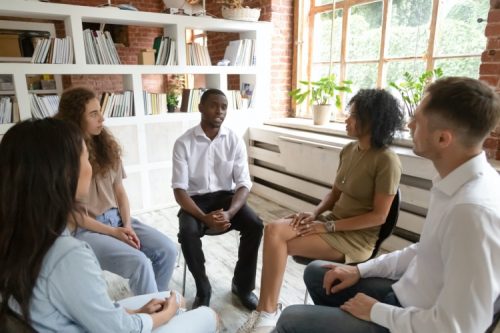 As the field of psychology matured, researchers began to focus on specialized aspects of the mind and behavior. This gave rise to subcategories of psychology, including social psychology.

Social psychology is one of the broadest and most complex subcategories because it is concerned with self-perception and the behavioral interplay among the individuals who make up society. What follows is an overview of social psychology as a science, including a definition, its origins, and topics related to the field.

Social psychology is the study of how individual or group behavior is influenced by the presence and behavior of others.

The major question social psychologists ponder is this: How and why are people’s perceptions and actions influenced by environmental factors, such as social interaction?

In seeking the answer to that basic question, researchers conduct empirical studies to answer specific questions such as:

For example, have you ever noticed you act and think differently among people you know than you do among strangers? Have you ever wondered why that is? Social psychologists spend their careers trying to determine the answers to questions like these and what they might mean.

Social psychology has been a formal discipline since the turn of the 20th century. An early study in 1898 of “social facilitation” by Indiana University psychology researcher Norman Triplett sought to explain why bicycle racers seemed to exceed their solo performances when they competed directly against others.

Later experiments sought to explain how and why certain artists and performers seemed to shine in front of an audience, while others faltered. During World War II, researchers conducted studies into the effect of propaganda on the behavior of entire populations.

Social psychologists explore the power of thought and perception to shape action and cement emotional connections. This is not a new concept; William Shakespeare provided one of the earliest known examples of an insight worthy of a social psychologist in his most psychologically complex play, “Hamlet.”

The beleaguered prince of Denmark explains why he considers his native country a prison, rather than a paradise: “Why then … there is nothing either good or bad, but thinking makes it so. To me it is a prison.”

Whether presented as a trick of the mind (“thinking makes it so”) or as an exploration of everyday thought and action, social psychology is concerned with explaining some of the deepest mysteries of human relationships and behavior.

It is an exploration of who we are, who we think we are, and how those perceptions shape our experience as individuals and as a society.

The fields of social psychology and sociology are sometimes confused. This is understandable, because both fields of study are broadly concerned with the way human behavior shapes and is shaped by society.

The primary difference between the two is this: Social psychologists study individuals within a group; sociologists study groups of people.

As early as 1924, when both fields of study were just beginning to reach academic maturity, University of Missouri researcher Charles A. Ellwood sought to simplify the difference between the two. Sociology, Ellwood wrote, is “the science of the origin, development, structure, and functioning of groups.”

Social psychology, according to Ellwood, is “the study of the [individual psychological] origins involved in the development, structure, and functioning of social groups.”

Naturally, the work done by both types of social scientists occasionally overlaps. A sociologist focuses on how the interplay among different groups of people — those with religious beliefs or ethnicity in common — affects the course of civilization.

This information could be considered a starting point for research by a social psychologist, who might use it to formulate a hypothesis about how an individual is affected by the group dynamic over the course of a lifetime.

Another way to think about the differences between social psychology and sociology is to consider the perception of the group dynamic.

Social Psychology Topics at a Glance

This dynamic duo also conducted important studies into the development of attitudes, religious beliefs, and many other topics.

Over time, social psychology research touched on nearly every facet of human personality in an attempt to understand the psychological influence of perception and human interaction. The topics covered by today’s social psychologists include:

What Is Social Cognition?

Social cognition is a subtopic of social psychology. Its focus is the study of how and why we perceive ourselves and others as we do.

This is important because without an understanding of our self-perception, it is impossible to fully grasp how our actions are interpreted by others. Similarly, to understand why others act as they do toward us, we must rely on our perception of their thoughts and motivations.

Social psychologists conduct research into how and why certain life experiences influence our perceptions of ourselves and others. In addition to other factors, researchers seek to understand how memory is processed and how it influences social cognition.

For example, young children’s perception is based on an egocentric view — their views of themselves and the world are shaped by limited experience. They do not yet understand how to interpret their own emotions and actions, let alone those of others.

By adulthood, the ability to perceive emotions and understand behavior has developed with experience. Perceptions are formed and decisions are made based on that experience.

A functioning adult can call on experience to answer questions like:

The way individuals learn to answer these and other questions about their self-perception falls under the study of social cognition. Scientists explore the mental processes that affect the interplay among perception, memory, and thought in shaping personality and social interaction.

This information, in turn, helps researchers understand the dynamic between group behavior and the development of an individual’s social identity.

Why are individuals drawn together to form groups? How does the group influence the behavior of an individual, and vice versa?

A study of group behavior attempts to answer these and other questions related to social cognition. It begins with the basic question: What is a group?

There is no set definition of a group, but social psychologists generally agree that a group can be identified as a coherent entity made up of individuals who share certain beliefs or characteristics.

Examples of groups include religious affiliations, scientific societies, and members of a political party. This definition includes large groups, such as the population of a neighborhood or a city, and smaller groups, such as a nuclear family.

The observable actions of a group make up the definition of group behavior. Social psychologists who study group behavior want to know the underlying motivations of those actions, how they originated, how an individual functions within the group, and the role of leadership in the group dynamic.

For example, how and why do some groups act out of a collective sense of kindness and acceptance, while others seem motivated by prejudice and violence? How does the innate conflict between self-perception and external perception affect an individual’s influence within a group?

Not only that, how and why are individual interests, opinions, and abilities sometimes sublimated to the group’s collective purpose?

Group behavior can be studied through the lens of individual status within the group. The group’s patterns of individual relationships may predict the group’s cohesiveness, and they might help explain how and why one group is more productive than another.

An understanding of group behavior helps explain why individuals might make certain decisions under the influence of a group that they would not have made alone. This kind of personality change — a shift based on group membership — is covered under the topic of social identity theory.

What Is Social Identity Theory?

Polish psychologist Henri Tajfel along with his British colleague John Turner studied the effects of group membership on self-perception.

They formulated social identity theory, which seeks to explain the relationship between group membership and the reinforcement of individual qualities such as pride and self-esteem.

According to Tajfel and Turner, individuals gravitate toward groups that are composed of people they admire or with whom they agree on important matters. Group members perceive themselves, at least in part, through the lens of their membership; they see themselves reflected by other members.

People who belong to groups are linked and governed by similarities. Group members’ self-identity is based on the shared attitudes, beliefs, and moral standards of the group.

This explains why individuals in a group might act differently than they would act if they did not belong to the group. They behave as they believe a member of the group should behave, rather than acting out of personal motivation.

Another aspect of social identity theory is the tendency toward tribalism, or embracing “in-groups” while rejecting “out-groups.” The group socialization of an individual takes place in stages, according to Tajfel and Turner:

Once individuals have thoroughly established their self-perception based on membership in an “in-group,” their mindset and behavior begin to reflect the expectations of the group.

In this way, individual social identity is sublimated to the group. Personal identity is exchanged for a sense of belonging, safety, and well-being.

A career in social psychology feeds a passion for understanding what motivates human behavior, and it requires extensive training in empirical research methods.

Social psychologists are recognized experts in human relationships, the development of self-perception, the group dynamic, leadership, and many other areas of psychology. Their research is vital across multiple disciplines, including business, healthcare, economics, political science, and education.

Become immersed in the study of human behavior and psychological research by earning a Maryville University online Bachelor of Arts in Psychology.

Understanding Behavior in Society: The Difference Between Sociology and Social Psychology

“The Relations of Sociology and Social Psychology,” Charles A. Ellwood

Verywell Mind, “Social Cognition in Psychology: The Way We Think About Others”