Women in STEM: A Guide to Bridging the Gender Gap

Historically, women have been systematically excluded from higher education. Although we’ve made great progress in opening education to women in recent decades, there is still a great deal of work that remains to be done. This is especially true in the STEM fields, which see a great imbalance of male to female students compared to other college degree programs. 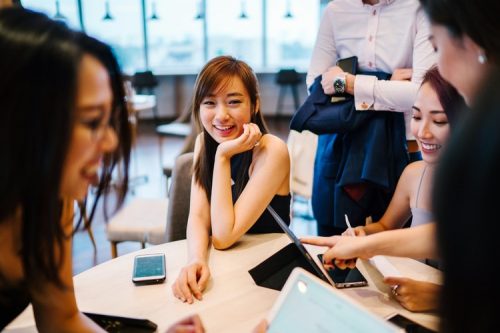 Although the STEM acronym wouldn’t be coined until the 1980s, the United States first began to push STEM-related fields heavily in the late 1950s, when the U.S. government undertook steps, such as passing the National Defense Education Act, in response to the launch of Sputnik. The Soviet satellite spurred the U.S. to pour billions of dollars into encouraging students to study fields related to science and math to ensure that the country could become the preeminent technological power on the globe.

Today, STEM majors make up a valuable part of any major university.

The Gender Gap in STEM

One of the major criticisms of STEM has to do with the gender disparity in students who graduate with STEM degrees and enter careers related to these fields. Research has shown that women are far less likely to graduate with a STEM degree or enter a career in STEM compared to their male counterparts.

Proponents of closing the gender gap in STEM fields point out that not only does the gap reflect unfair conditions and poor treatment of women in STEM fields, but it also reduces the quality of work and innovation being done in these fields. They argue that scientific progress relies on unique solutions that arise from diverse perspectives, and that closing the gender gap and making STEM fields more diverse will help to ensure that tomorrow’s scientists are approaching problems from a variety of different perspectives.

Although we often speak of a broad gender gap that exists across STEM fields, there is a great deal of variety among different STEM subfields when it comes to the exact scale and nature of this gap. Some fields may have no gap at all, or may even favor women for graduation and job placement, as is the case in the social sciences, which often have more women than men. However, others remain strongly unfavorable toward women. To understand the gender gap in STEM, it’s important to recognize how it manifests in each field.

The Gender Gap in Science

Science includes a wide range of fields and disciplines, which all experience the gender gap in different ways. However, some of the greatest offenders include the fields of physics and chemistry. Data from the American Physical Society showed that a mere 21 percent of bachelor’s degrees in physics were earned by women in 2017. The problems with such a pronounced gap are further compounded by allegations information that sexual harassment and gender discrimination are persistent in work related to physics.

Information from the National Science Foundation shows that women made up 28 percent of all workers in science and engineering jobs. While that’s an improvement from 23 percent in 1993, there’s clearly a lot of work that still needs to be done.

The Gender Gap in Technology

The Gender Gap in Engineering

Interestingly, 23 percent of doctoral degrees in engineering were awarded to women in 2015. Unfortunately, women in these programs continue to face issues like sexual harassment at alarming rates.

Engineering is the career most heavily affected by the gender gap of all the professional STEM fields. In 2010, fewer than 13 percent of working engineers were women. While that number has improved from 8.6 percent in 1993, there’s still a long way to go to reach gender parity in engineering.

The Gender Gap in Mathematics

These relatively good numbers face a harsh dropoff for doctoral degrees, where only 29 percent of doctoral degree earners in mathematics were women in 2014.

Careers in mathematics are somewhat harder to categorize than things like engineering or science jobs, since people with mathematics degrees can put their skills to work in a wide variety of fields. However, we do know that just 15 percent of tenure-track teaching jobs in mathematics are held by women. That’s roughly similar to the 18 percent in computer science and 14 percent in engineering, suggesting that mathematics faces a serious gender gap problem in its workforce and in higher education.

As with other forms of discrimination, we find that the gender gap in STEM often intersects with other social and economic classes. Therefore, women who belong to other minority groups may have unique experiences in STEM fields.

Asian women, though they are women of color, are overrepresented in STEM fields compared to their overall portion of the population.

When we think about minorities in our society, we don’t usually think about veterans, but they can often struggle to reintegrate back into society.

To ensure that female veterans have the best opportunities to reintegrate, we must see to it that they don’t face discrimination as women in STEM fields, and that they know where to find resources to help veterans through college.

Research has shown that LGBTQ students often face discrimination and unkind environments in STEM fields. However, while retention rates for gay men in STEM majors are lower than those of straight men, gay women were actually retained at a higher rate than straight women. However, gay women still face intense discrimination, and their retention rates are below those for straight white men. It’s critical that STEM departments provide resources for LGBTQ students to help them feel included in their college education.

The History of Women in STEM

Although discussion over improving inclusiveness for women in STEM has only recently become a hot topic, women have been making waves in STEM fields since humans began to examine the natural world. One way to bolster the ranks of future women in STEM will to be acknowledge the contributions that women have made to fields like science and mathematics in the past.

Many women have made significant contributions to our understanding of the world, but these contributions are only now being recognized. Below are just a few of the women who have, throughout history, changed the way that we think about the natural world.

Ada Lovelace was one of the early computer scientists. She is credited with the creation of the first computer program when she developed an algorithm for Charles Babbage’s analytical engine that would output Bernoulli numbers. Although she died of uterine cancer at age 36, her work was instrumental to the advancement of early computer science.

Marie Curie is widely regarded as the most inspirational female scientist of all time. She was also the first person to win the Nobel Prize twice; first in 1903 for her work in physics, and then again in 1911 for her work in chemistry. Curie’s work dealt primarily with radioactivity, including the discovery of several radioactive elements. The radioactive element curium, which was discovered in 1944 after Curie’s death, was named in her honor.

Katherine Johnson is an African American mathematician who worked for NASA during the space race with the Soviet Union. She was jokingly referred to as a “computer” by her coworkers, and the calculations she made were critical to putting Americans in orbit, and eventually in allowing humans to land on the moon.

Rosalind Franklin was an English chemist whose work on molecular structures formed the foundation of our understanding of the fundamental workings of things like DNA, RNA, and viruses. She died early on in her brilliant career at age 37.

Sally Ride was an astronaut, engineer, and physicist. Her position as the first female astronaut and the third woman to travel into space, as well as her science books aimed at children, have positioned her to be an inspirational figure for many young women and girls interested in STEM fields.

Importance of Women in STEM Fields

Although individual women would obviously benefit from the creation of more inclusive atmospheres in STEM fields, these fields as a whole can also benefit by becoming more inclusive.

Science functions best when it considers a wide range of diverse perspectives. When scientific fields exclude women, they exclude a wide range of extremely talented future scientists, as well as fresh perspectives that could be used to approach old scientific problems. In general, research has shown that diverse workplaces are happier and more productive, suggesting that STEM organizations could do better for themselves by being more inclusive.

Benefits of Women in STEM

Not only can bringing more women into STEM fields improve the quality of work being done in those fields, but it will also open up great career opportunities for many women. In 2017, the starting salaries of STEM majors were among the highest of any majors. Getting more women into well-paying STEM fields can help to close the gender pay gap.

Obstacles to Women in STEM

Women face unique obstacles because of their gender when it comes to going to school and working in STEM fields. Many women in STEM report the following kinds of mistreatment from their coworkers

The Gender-Equality Paradox is a supposed paradox between gender equality and representation in STEM fields. As the paradox goes, in countries with a great deal of gender equality in society at large — especially Scandinavian countries — there is no corresponding equal representation for women in fields that have conventionally been male-dominated, such as many of the STEM fields.

However, the idea of the Gender-Equality Paradox is not without its problems. Critics point out that countries with poor representation in STEM fields have a long history of excluding women from science and mathematics, which is deeply embedded into the culture that surrounds young girls as they’re growing up. They also point out that there is no gap in ability, since researchers found that girls performed as well or better than boys on science tests in most countries.

Closing the Gap: Solutions to Get More Women in STEM

True solutions to the gender gap in STEM fields have to work on multiple levels. Exclusion begins in childhood, when young girls are pushed away from science and mathematics and encouraged to adopt more care-oriented work. Bad practices continue through education and into the workplace, where women are discriminated against in STEM majors and companies.

In the home, parents should take care to remind their children that they can grow up to do anything that they want, while providing a wide range of opportunities for children to explore their interests, including those related to STEM, such as coding camps and science fairs.

In education, scholarships and grants can help to bring women into STEM departments. However, it’s critical that these departments do everything in their power to prevent discrimination and sexism against female students to improve retention rates.

In the workplace, it’s critical for employers to identify and address discrimination in their hiring practices so they can produce a diverse workplace to promote greater happiness and productivity among their employees. Best practices around manager-employee relationships and pay scales should also be identified so women are treated with equal respect by their male colleagues for their work.

Outside of schools and the workplace, broader societal changes are called for. Women are often harder hit by a couple’s decision to raise a family, forcing them to take more time off of work during critical periods in their careers, such as early on at a new job or even during their doctoral studies.

Resources and Organizations for Women in STEM

Below are resources for women who are interested in pursuing a STEM career and those who may support them.

What is cyberbullying? Information and resources for students, parents, and teachers

Certus, 8 Female Pioneers in the World of Technology

National Center for Women & Information Technology, Girls in It