For over three years, Ann Barron-DiCamillo led the charge to protect the internet infrastructure throughout the United States, defending against cyberattacks and data breaches.

As the chief of the Department of Homeland Security’s U.S. Computer Emergency Readiness Team (US-CERT) from 2013-2016, Barron-DiCamillo was uniquely positioned to fortify the country’s cybersecurity network. 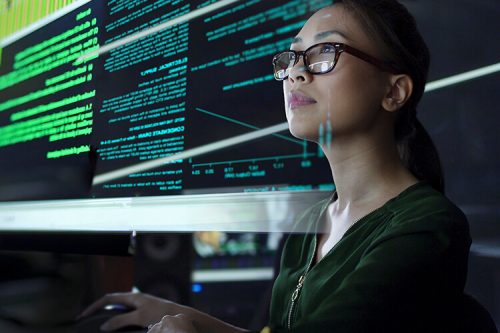 As a woman, Barron-DiCamillo broke the glass ceiling to take a significant role in cybersecurity. Today, women represent about 50% of the global population but only 11% of the cybersecurity workforce despite having higher levels of education than men overall, according to the 2017 Global Information Security Workforce Study.

According to Fortune Business Insights, the cybersecurity market is projected to grow from $165.78 billion in to $366.10 billion between 2021 and 2028. This, along with 32 million new positions expected to be created between 2018 and 2028 in the United States alone, will provide unprecedented opportunities for women to move into higher-level information security posts.

The demand for cybersecurity professionals has far outpaced the supply, and salaries are on the rise. The U.S. Bureau of Labor Statistics found the median wage in information security to be about $99,730 in 2019. Employment opportunities in the field are also expected to increase nearly 31% between 2019 and 2029, nearly eight times the average growth projected for all career types (4%).

“Different skill sets are becoming more valued in security instead of just having highly technical employees,” Robb Reck, chief information security officer at Ping Identity in Denver, told the Denver Post. “Anytime you can get diversity, you expand the overall perspective of a group.”

Every day, hackers work to overcome firewalls and other security protocols. According to a recent report by cyber defense company McAfee, online crime netted a global cost of about $1 trillion in 2020, more than a 50% increase from just two years before. And while many attacks are conducted for financial benefit, a large source of attacks stems from cyberwarfare that can serve as a destabilizing force.

The Hervajec Group, a leading cybersecurity firm, estimates there may be a global shortage of about 3.5 million IT security professions by 2021 as approximately 40,000 cybersecurity jobs go unfilled. In-demand job titles include security analyst, security manager, systems administrator, and security architect.

“Technology has moved so fast over the last couple of years that there’s always a little bit of a lag between when skills are demanded and when training programs and certifications can catch up,” Tim Herbert, of the nonprofit tech trade group CompTIA, told CyberScoop. “There’s also a much greater use of technology across all sectors. The tech sector is the biggest employer of tech skills, but we’re also seeing [an increase in] hiring throughout manufacturing, healthcare, financial services, and down the line. There’s simply more demand relative to supply.”

Challenges for women in cybersecurity

Studies show women are underrepresented in the field of cybersecurity, but the trend is slowly shifting. The emerging change gives women just entering the field an edge over the competition for better jobs. Some of the challenges that women in cybersecurity have faced in the past include the following:

Researchers found companies are taking steps today to move more women into the field of cybersecurity, following recommendations to make workplaces diverse. The push to a comprehensive expansion of women in the field includes the following:

Today, many women have taken leadership roles in cybersecurity. Barron-DiCamillo, while working at US-CERT, oversaw around-the-clock operations to block cyber threats against the country. As a former vice president of cyber threat intelligence and incident response at American Express, she acknowledged that the once male-focused cybersecurity world has moved beyond stereotypes.

“Cybersecurity is not just programmers in hoodies and a series of zeroes and ones,” she said. Having moved ahead to Managing Director, Global Head of Cyber Operations at Citi, Amy looks toward the future as a defining moment in female and individual empowerment.

Other prominent female cybersecurity experts include:

Prepare for a future in cybersecurity

Students enrolled in an online cybersecurity degree program can study topics that are highly relevant to the field, including cryptography, cloud security, and incident handling.

Contact Maryville University for more information, or check out our cybersecurity page to learn more about this and other relevant degree programs we offer.

CyberScoop, “How to make sense of the wide open cybersecurity job market”

U.S. Department of Justice, “How to Protect Your Networks from Ransomware”