Being Black in America comes with unique pressures and challenges. Being Black in corporate America can be even harder, as workplace cultures and policies may create inequitable work environments for Black professionals. This is reflected in the number of Black professionals in leadership roles: Recent data suggests that African Americans hold just 3.2% of senior leadership roles at U.S.-based companies and corporations, despite accounting for 10% of U.S. college graduates. 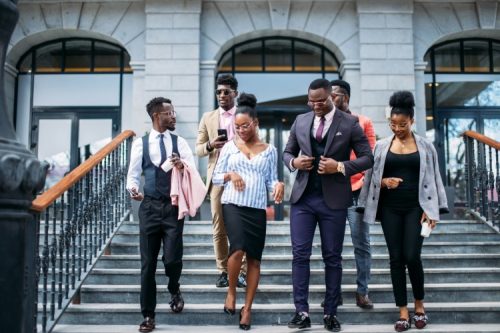 Yet regardless of being underrepresented in prominent white-collar industries and C-suite positions, Black professionals have made significant contributions in fields such as technology, healthcare, and business. These trailblazers have not only paved the way for future generations but also made important strides in leveling the playing field.

Skilled technology professionals are in high demand. The U.S. Bureau of Labor Statistics (BLS) projects employment in computer and information technology occupations will grow by 11% between 2019 and 2029.

While tech companies have invested heavily in increasing workforce diversity, progress is slow, which industry insiders believe is due to a lack of support and mentorship. The Los Angeles Times reports that of the more than 50,000 Google employees, only 3.7% were Black in May 2020, up from 1.9% in 2014. Despite the roadblocks and inequities of the industry, Black innovators are making a lasting mark.

Phaedra Ellis-Lamkins’ Oakland, California-based company PromisePay (fka Promise) began in 2017 as an app to improve criminal justice outcomes by helping pretrial defendants manage court appointments and hearings. The startup has since grown into providing a broader technology platform that offers payment plans and flexible payment methods in order to solve the challenges citizens may face when trying to make payments. The company currently enables payments for things such as child support, restitution, tickets, program fees, and more.

Kimberly Bryant, founder and CEO of Black Girls Code, has said that the organization was born out of her personal experiences — when she was a first-year college student, few of her electrical engineering classmates looked like her. The company launched in 2011 and its mission continues to be to “introduce programming and technology to a new generation of coders, coders who will become builders of technological innovation and of their own futures.”

The BLS projects that between 2019 and 2029, the number of physician and surgeon positions will grow by 4% and the number of registered nurse positions will grow by 7%. While Black professionals are not equally represented in many healthcare fields, colleges and universities are working to boost Black enrollment in healthcare-related degree programs. USA Today reports that Black students made up 7.3% of medical students in 2020, though just 2.6% of U.S. doctors were Black in 2019. And while a 2018 U.S. Department of Health and Human Services study reported that just 7.8% of registered nurses were Black, the American Association of Colleges of Nursing reports that for the 2019-20 school year, African Americans made up 11.2% of Bachelor of Science in Nursing (BSN) students, 14.4% of Master of Science in Nursing (MSN) students, and 17.3% of Doctor of Nursing Practice (DNP) students. Additionally, a number of notable Black healthcare professionals have made significant contributions to the field.

Charles Richard Drew graduated second in his class at McGill University College of Medicine with both MD and ChM (Master of Surgery) degrees. Although he endured serious discrimination, such as being barred from practicing at the Mayo Clinic because of his race, he went on to become a pioneer in medicine. While earning a doctorate at Columbia University, Drew discovered methods for preserving and storing blood plasma. Later in his career, he organized the first large-scale blood bank in the U.S.

Data from the BLS suggests that the overall employment of top executives will grow by 4% between 2019 and 2029, and management occupations as a whole will grow 5%. According to the BLS, 32% of employed Black individuals worked in management or professional positions in 2019, up from 27% in 2008.

Unfortunately, the number of Black professionals in C-suite positions continues to lack representation. For example, while Black Americans represent 13.4% of the U.S. population, less than 1% of Fortune 500 CEOs are Black, according to Coqual’s 2020 report Being Black in Corporate America, an Intersectional Study. Despite this underrepresentation, Black business professionals have led, innovated, and inspired.

Madam C.J. Walker was born to former enslaved parents in 1868 on a cotton plantation in Louisiana. In her early 20s, she developed a scalp disorder that resulted in hair loss. This prompted her to experiment with store-bought hair care treatments and home remedies, which she later began to sell. In the following years, she turned her hair care line into a bustling business, and by the early 1920s, she became the first Black female millionaire in the U.S. Madam C.J. Walker used her fortune to fund scholarships for women at the Tuskegee Institute and donated large sums of her wealth to the NAACP, the Black YMCA and other charities. The 2020 Netflix series Self Made chronicles her story.

American businessman Robert F. Smith is the founder, chairman, and CEO of Vista Equity Partners. Throughout his career, Smith has received numerous accolades, including being named on Forbes’ 2017 “100 Greatest Living Business Minds” list. In 2019, Smith announced that he would pay off the entire Morehouse College graduating class’s student loans, amounting to $34 million.

Decades after the civil rights movement, Black professionals still struggle for pay and workplace equality and face a number of serious other challenges.

Become a Leader in Your Industry: Tangible Tips to Advance Your Career

Black professionals face systemic headwinds in the workplace, and much of the responsibility for improving Black representation in various industries lies with employers, management teams, and allied coworkers. But there are ways that Black professionals can work toward career advancement and make progress on the path to leadership.

Take time to reflect on what you want and determine if there are additional skills that could help you forward your career (such as speaking a foreign language or holding a professional certificate). Give yourself a deadline to attain them.

Seek feedback from supervisory staff. Don’t be shy to ask what you’re doing well and how you can improve. Additionally, know your strengths. If you feel your employer is underutilizing you, or assigning you to the wrong tasks, don’t hesitate to discuss your strengths with management or team leaders.

Black individuals may be unaware of their strengths because they are so focused on “trying to adapt and trying to compensate and trying to prove and trying to fit in, that they never have a chance to actually soar and excel within their own lane,” according to Laura Morgan Roberts, co-author of the book Race, Work, and Leadership: New Perspectives on the Black Experience. Roberts advises Black professionals to explore how “cultural and professional experiences equipped you to meet the challenges and opportunities in your career” and to use that knowledge to find opportunities for growth.

Don’t be afraid to share your thoughts or ideas during meetings and one-on-ones with management. If you have an idea or suggestion that you think could benefit your team, speak up. Being assertive can help improve your self-esteem and confidence.

Keep tabs on high-profile or important projects you’ve worked on and outline your contributions to those tasks. Do you have skills or qualifications that set you apart from your colleagues? Document your awards and accomplishments and share them with management during your annual review.

Become an advocate for equity in the workplace by joining your company’s diversity, equity, and inclusion (DEI) committee and by educating your peers on how to be allies for Black coworkers. You can also become a mentor for other Black professionals working to advance their careers. Seeking other advocates and mentors in the workplace can also provide guidance for advancing your career.

Learn the benefits of networking via your alumni association, at conferences and trade shows, and on LinkedIn. Joining Black professional groups can also be helpful. Some organizations include:

Complete an advanced education, such as an online master’s in your field. Maryville University’s online graduate degree programs are accessible from anywhere with an internet connection. Maryville students don’t need to travel to campus and can study on their own schedules.

Take Charge of Your Career

To advance in the workplace, Black professionals must make their voices heard and their presence felt. Advocate for other Black professionals when opportunities arise, be proactive in developing relationships with senior management and staff, and take steps to grow your knowledge, skills, and corporate value. Are you ready to take the first brave step toward advancing your career? Discover how Maryville University’s online degree programs can prepare you for the job you want.

Year in Review: The Power of Self-Reflection

American Association of Colleges for Nursing, Enhancing Diversity in the Workforce

Black Girls Code, About Our Founder

CBS News, “Why So Many Black Business Professionals Are Missing from the C-Suite”

Coqual, “Being Black in Corporate America, an Intersectional Exploration”

Forbes, “Why Are Black Male Doctors Still So Scarce in America?”

Harvard Business Review, “How African-Americans Advance at Work — And What Organizations Can Do to Help”

Los Angeles Times, “Why Are Black and Latino People Still Kept Out of the Tech Industry?”