Intriguing International Careers: How to Become a Foreign Correspondent

In 2014, 276 Chibok schoolgirls in Nigeria were kidnapped by Boko Haram, a terrorist organization operating throughout West Africa. Nigerian-American reporter Chika Oudah was one of the first journalists to arrive on the scene. She was largely responsible for the story reaching international audiences through her work as a foreign correspondent for Al Jazeera. Her continued coverage of the area has brought to life issues facing women, children, and orphans in this part of the world, and has earned her many awards. Through reporting like Oudah’s, the whole world became focused on the story of these Chibok girls, and international pressure helped many of them return home. 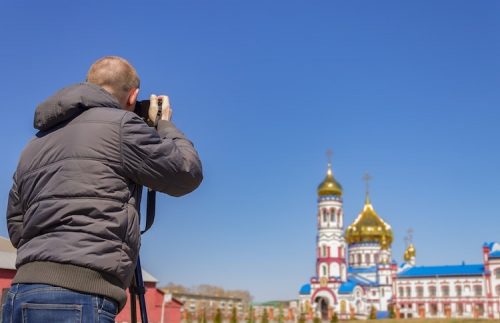 Work like this –– reporting on events outside of the United States as rapidly and accurately as possible — is often dangerous and frustrating, but has real impact.

This is just one example of the vital role that foreign correspondents play in modern journalism.

By witnessing, researching, writing, and sharing stories of international resonance, foreign news correspondents connect the world by highlighting growing issues in specific countries, regions, and the world at large. They can promote cross-cultural knowledge and understanding, and often influence the outcome of political situations. With realistic expectations and a drive to persevere, there is room for you to carve out an exciting and rewarding career as a foreign correspondent, with the potential to spark change through groundbreaking reporting.

What Does a Foreign Correspondent Do?

A correspondent is a reporter who contributes news or commentary to a publication or media network, often from a distant location. Foreign correspondents typically report from countries other than their own and focus on specific “beats” (e.g., the drug trade in Southeast Asia or politics in Africa). A foreign correspondent can be “roving” — following news events or topics of interest wherever the stories take them.

If you’re excited by the prospect of trekking the globe to uncover and report on important news, you’ll need some essential skills. First and foremost, a foreign correspondent needs to be a subject-matter expert in the field in which they report; translating their broad understanding and specific insights in a way that makes sense to a lay audience. Strong storytelling relies on excellent communication skills, and that often means breaking down complex topics into clear and compelling reporting.

Foreign correspondents have different specialties. War correspondents report on the quickly evolving circumstances of war in places like Syria. Political news correspondents, like NPR’s Lucian Kim in Russia, report on evolving politics and tensions across the globe. Correspondents like Chika Oudah combine the stories of citizens of faraway countries with coverage of political and social issues.

Foreign correspondents often report for a large media network, but they can also be freelance workers, pitching story ideas to a variety of different media outlets. Some foreign correspondents work in media-friendly countries with access to those in power, while others are challenged by assignments in areas of the world considerably less friendly to journalists.

What a foreign correspondent does is important. If you pursue this career, you take on the responsibility of representing political events and social movements in cultures other than your own in a respectful, accurate, and objective manner. This kind of reporting enables your audience to better understand what’s happening globally. It may even spur them to take action to make the world better.

Steps to Become a Foreign Correspondent

If the challenge of illuminating people about world events inspires you, education and training are crucial to success in this exciting but competitive field. When considering how to become a foreign correspondent, there are a few essential steps.

A Bachelor of Arts in International Studies from an accredited institution such as Maryville University provides a solid foundation for understanding the complexities of other regions and cultures. Many international studies programs allow you to specialize, focusing on one area of interest such as a region of the world, or a certain language or culture. You can also focus on a specific topic, like global economics or politics. An international studies degree is not only helpful in gaining a deeper understanding of global and cultural issues, but also in helping hone vital communication skills.

Jump Into a Foreign Environment

It’s worth supplementing your education with real-world experiences in a foreign environment. This can happen through a study abroad program, either while earning your degree or after graduation. Taking the time to immerse yourself in a foreign culture allows you to adapt to new experiences, gain more intercultural skills, and learn a new language.

While studying abroad, students are able to continue sharpening their communication skills and expand their understanding of global issues during formal study. They can then apply their classroom skills to their work in international settings. Students aspiring to become foreign correspondents might do well to study journalism during their study abroad to experience the realities of reporting from another country.

Writing ability is important for foreign correspondents. Courses in international studies such as world literature help students become more effective writers and communicators. In addition, those who are comfortable reporting in front of a camera or microphone via television, radio, podcasts, YouTube videos, or other media outlets may see an increase in their market value.

The lowest 10% of earners in the category of reporters, correspondents, and broadcast news analysts made under $23,490, according to the BLS, while the top 10% earned more than $200,180. PayScale, which sources its data directly from workers, reports the median salary for foreign correspondents at $60,000.

When considering how to become a foreign correspondent, remember the job market for journalists is competitive. This is partly because numerous once-large media outlets are shifting to a contracting model for their reporting, merging, or shutting down. While the average large American broadsheet newspaper used to have numerous foreign correspondents, now only a handful of national papers do.

The BLS projects that between 2016 and 2026, the market for broadcast news analysts will remain steady, while the number of reporting and correspondent jobs will dip only slightly.

Not only that, the BLS projects a growth of 6% for writers in the field of media and communication. Studying intercultural communication and taking courses in literature offered in an international studies degree program can help boost future foreign correspondents’ abilities in this field.

Many of today’s journalists are freelancers with greater control over their own content and an ability to forge their own relationships with various news outlets. Today, whatever the arena, opportunities exist for candidates who are motivated, hardworking, and able to navigate the changing dynamics of the foreign news market.

Learn More About How to Become a Foreign Correspondent

Foreign correspondents travel the world, report on key issues, and meet people of other cultures and walks of life, all while making a difference to our shared future. See how Maryville University’s online Bachelor of Arts in International Studies can be the first step toward an exciting, influential career. Learn more and apply to earn your degree today.

Columbia Journalism Review, “A Celebrated Foreign Correspondent Built His Life Work On Detachment. “Then Everything Changed.”

MediaShift, “10 Tips for Training the Next Generation of Foreign Correspondents”

Poynter, “Want To Be a Foreign Correspondent? She’s Got Some Heartfelt Advice To Offer”