How to Become an Air Marshal

On any given day, the Federal Aviation Administration (FAA) handles roughly 43,000 flights in the United States, carrying around 2.6 million airline passengers. At the same time, the Transportation Security Administration (TSA) ensures passengers and flights are safe and secure. But the security efforts of the TSA extend well beyond screening passengers at the airport and monitoring baggage and other items for potential hazards. It also employs professionals known as air marshals. These are armed officers whose duty is to ensure the security of flights and protect passengers and crew from potential threats while in the air. 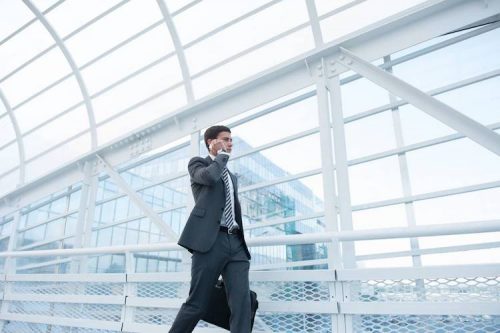 You may be wondering how to become an air marshal and exactly what air marshals do. Following is information about the responsibilities, salaries, and growth opportunities associated with this career.

What Does an Air Marshal Do?

According to the TSA, an air marshal “detects, deters, and defeats hostile acts against aviation” and “performs investigative work, participates in multi-agency task forces and in land-based investigative assignments to proactively fight terrorism.” As such, this profession is for those who deal well with high pressure environments.

Air marshals are rigorously trained to evaluate potential risks, react calmly in life and death situations, and skillfully use firearms and hand-to-hand combat techniques in confined spaces with no backup, as outlined in a CBS interview. Their training also covers disciplines such as mission tactics and defensive measures, and they even hold medical first responder training certificates.

Air marshals actively monitor passenger safety during flights and are prepared to respond to any threats that occur. Although they are not on every commercial flight, they are authorized to be deployed on any U.S. air carrier. While air marshals may identify themselves to members of the flight crew, they mostly remain anonymous while on the aircraft to better ensure passenger safety.

The Federal Air Marshal Service (FAMS) was first created in 1961 to counter hijackers and was expanded in the wake of the 9/11 attacks, according to a report from the United States Government Accountability Office (GAO). Promoting public confidence in the safety of air travel is an important component of the FAMS mission, according to the TSA.

Steps to Become an Air Marshal

While prospective air marshals may come from a variety of backgrounds, they must follow a common path to qualify, apply, and train for the job. Here is an overview of the key steps that air marshal candidates typically follow.

Applicants for air marshal positions must be at least 21 years old but no older than 37. As noted by the TSA, the hiring process to become an air marshal consists of a written application, an interview, a medical exam, physical training, a psychological assessment, a polygraph, and a complete background check.

Candidates who make it through the application process then must complete the Federal Air Marshal Training Program (FAMTP). The program includes a one-week orientation and two phases of training (FAMTP-I and FAMTP-II), lasting a total of 16 and a half weeks.

During the first seven weeks, known as phase one, candidates are provided with basic law enforcement knowledge at the Federal Law Enforcement Training Center (FLETC) in Artesia, New Mexico. FLETC also has rigid physical performance requirements that all candidates must measure up to.

After air marshal candidates complete FAMTP-I, for the final eight and a half weeks, they are taught “the knowledge, skills, and abilities necessary to prepare them for their roles as federal air marshals” at the TSA Training Center in Atlantic City, New Jersey, according to the GAO.

After successful completion of the FAMTP, participants then report to duty as incumbent air marshals and are required to complete 160 hours of recurrent training courses annually. As noted by the GAO, these ongoing training courses ensure that air marshals constantly sharpen tactical skills which are necessary for action in the line of duty. The GAO report notes that these recurrent courses encompass both refresher courses as well as mandatory courses such as defensive measures, intermodal systems, medical first responder, firearms, legal and investigative work, mission tactics and physical fitness.

An opportunity for aspiring air marshals to bolster their qualifications and learn relevant skills that will serve them well in the field is to complete a bachelor’s degree program. Preferably, the degree would be in a law enforcement-related field such as criminal justice. These degree programs can provide prospective air marshals with the knowledge and skills they need to meet the initial TSA requirements for the position. For example, an online bachelor’s in criminal justice degree can expose students to skills that are vital to succeeding as an air marshal, including leadership and communication skills, as well as knowledge of local and federal laws and terrorism threats.

According to PayScale, salaries for air marshals range from $38,000 to $118,000 per year, with the median salary being $67,138 as of February 2019. TSA determines air marshals’ salaries using a tiered compensation scale that is unique from those used by other government agencies. Starting salaries may depend on factors such as education and experience, meaning marshals who have served for several years typically earn more than the average salary.

Because air marshals work for the federal government and their salaries are funded through fluctuating annual budgets, it is difficult to accurately project future job opportunities and growth. A dip in federal funding resulted in a hiring freeze in the program between 2012 and 2015, but hiring resumed in 2016, potentially indicating a renewed sense of need for air marshal professionals which could carry into future years, according to the GAO. For positions similar to air marshals, such as police officers and detectives, the BLS projects a 7 percent job growth rate from 2016 to 2026.

Air marshals are law enforcement professionals who help maintain the safety and security of a plane and its passengers during flight. Their tasks can include skillfully blending in with other passengers to maintain anonymity and monitor potential flight risks. The ability of air marshals to neutralize security threats such as hijackers or terrorists is integral to the safety of air travelers, the airline industry, our country, and society at large.

Becoming an air marshal requires comprehensive education, including strong leadership and communication skills, as well as law enforcement training. Maryville University’s online bachelor’s in criminal justice degree program is an excellent start for students who wish to pursue the advanced knowledge needed to qualify for an air marshal career.