Get Program Details
What degree level are you interested in pursuing?
Next Step We value your privacy.
Back to Business Faculty 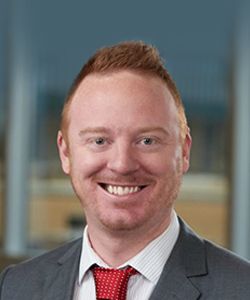 Dustin York, EdD, teaches as an associate professor of the graduate and undergraduate communications programs at Maryville University. His PR experience spans the agency, corporate, and political realms; York has worked for major clients including Nike, PepsiCo., and Scottrade Financial Services and as the public relations consultant on a 2008 political campaign.

York’s doctoral dissertation examined the relationship between speakers’ nonverbal communication and audiences’ recall of spoken information. His method increased information recall by 22 percent and was published in Entrepreneur magazine and PR Daily. In 2016, he was included in St. Louis Business Journal’s 30 Under 30 list, and in 2022, he was the recipient of American Marketing Association Foundation’s 4 Under 40 Emerging Leaders Award.

At Maryville, York has facilitated the launch of a student organization that tackles public relations projects for one client per semester. Clients have included the St. Louis Library and Safe Connections, an organization in St. Louis working to end domestic and sexual violence. He also serves as the faculty advisor to Pawprint, Maryville’s online student newspaper, and Saints Talk, a student sports podcast.

When Dustin York, associate professor of communication at Maryville University, started his undergraduate studies in public relations, teaching as a profession was not on his radar. He had been leaning toward advertising or law. But the unlikely path that led him to work in branding — and also teach about it — started his freshman year in college when he took a position at Spencer’s, a nationwide lifestyle retail company known for its quirky and unique stock.

After a short stint as a sales associate, York quickly attained the role of store manager and immediately began implementing ideas to improve sales at the underperforming site. “There wasn’t much oversight in the store, so I really had nothing to lose,” he says. “What corporate was telling us to do wasn’t really resonating with the target market.”

The corporate office had specified grunge and gothic-type music, as well as minimal overhead lighting, which created a dark and somber atmosphere. But the site was located in a predominantly college town, so York reimagined the store to appeal to 20-somethings. He created a more upbeat party atmosphere, with high-energy music and bright lights throughout. And he didn’t ask permission, taking a chance that the changes would yield results. Before long, sales increased, and the store became the company’s 14th-best-producing site. “That was really kind of an ah-ha moment for me — when I saw the real-world results,” he says. “I found that the stuff I was learning about in class on branding and message appeal really worked. It had a direct effect on outcomes.”

That experience led York to pursue a career in the field of branding and marketing. After college, he spent time working as a publicity specialist on a 2008 presidential campaign and on national brand public relations for a variety of agencies. The diversity of work and clients challenged and motivated York, something he also feels when he’s in the classroom. “I’m not saying and doing the same things for multiple semesters. There are learning outcomes that are the same, but how we get to those points changes.”

While working in PR and branding, York returned to school, earning a Master of Arts in Communication, and simultaneously taught a communications course as an adjunct professor. That was the first time he considered teaching as a profession. “I just love that moment when the light turns on and you can really see it in a student’s eyes,” he says. “That drove my enthusiasm and made me super passionate for every day.”

The intersection between what York was learning and the work he was doing in PR and media training — specifically with politicians and CEOs — continued to overlap. His work focused on utilizing nonverbal traits to increase likability and authority, such as how to sit in an interview, the best way to shake hands, when to make eye contact, and the ideal time to use names. On the academic side, he was being exposed to what he describes as really cool research and science surrounding the field. “We were training a CEO on how to go on CNBC to do an interview, and I thought, why doesn’t everyone know about this for job interviews?” The field piqued York’s interest and became a research focus that led to his doctoral pursuit in nonverbal communication. He was particularly interested in finding ways to use the tips and tricks on a much wider scale.

York’s dissertation research specifically addressed message recall and what nonverbal traits an instructor, lecturer, or leader of a group or class could change to increase memory recall of information. Most of the current research was centered on using nonverbal communication to impact likability and authority, so York’s emphasis on memory recall was somewhat innovative. To test his theory, he set up a model and repeated it multiple times: An instructor on a college campus would teach the same 100-level course to two different groups of students, delivering identical memorized lectures, with no interaction or Q&A. “It was basically more like an acting gig than a teaching gig,” York explains. The instructor delivered the memorized lecture the first time with five specific nonverbal cues, and the second time without. The five nonverbal cues comprised using hand gestures, movement, and vocal variation; making eye contact; and eliminating barriers. All participants were tested before and after each lecture. The message recall increased a full 22% among the participants who had received the message with nonverbal cues. York indicates that the cues, with the exception of vocal variation, can be learned in about 30 minutes with simple hacks or tweaks to quickly get buy-in.

Following the completion of his Doctor of Education – Instructional Leadership, York took a position as a program director and assistant professor at Maryville University, where his findings on nonverbal communication and focus on technology and digital media constitute the backbone of his curriculum. He also continues his work as a communication consultant and speaker. The teaching post aligns with his passion to help revolutionize education by being progressive, innovative, and brave. At Maryville, in addition to developing a number of on-campus and online courses, York has brought in new technologies to support Paw Print, the student-run online publication, working with students to optimize the website and add in articles, podcasts, and videos. As a consultant, he offers media training sessions to share his method of increased information recall through nonverbal communication, backed by experience and proven research and science In addition, he consults on the use of social media, SEO, and emerging technologies like voice, drones, and AI, and covers these tools in his courses as well,

At Maryville, York’s top priority is student outcomes — the same kinds of real-world outcomes he first learned about as an inexperienced manager at Spencer’s. And that’s in keeping with Maryville University’s promise of providing a personalized, student-first and future-focused experience that fuels success.

To translate that promise to the professional world, the university reached out to employers to learn what attributes they value in potential hires: The first was soft skills or nonverbal communication skills, such as how to speak, how to show up to a meeting, and how to act professionally at a business lunch; the second was technological proficiency in areas such as setting up a blog, using Google Analytics, and writing for search engine optimization. The programs that York teaches at Maryville University focus on both. Throughout their entire college experience, students are following a roadmap to help them be successful: They consistently update their resumes based on the feedback they receive, participate in multiple internships and informational interviews, and learn how to use nonverbal communication to stand out. The students also gain firsthand experience with technology, flying drones in class, creating virtual reality experiences, designing microtargeted ads on Instagram and Facebook, and earning certifications in Google Analytics and from organizations like Salesforce and Hubspot. “My key performance indicator is [whether we’re] setting up our students for career and professional community success from our program,” says York. “And the data confirms that we are.” Last May, 85% of Maryville University undergraduate students had landed full-time jobs before they graduated. “That’s the KPI that I really focus on,” he says. “That culture of lifelong learning and support using real-world clients and real-world opportunities.”