Why Are Data Scientists in High Demand?

This is a great time to be a data scientist. An August 2018 LinkedIn report declared that the demand for data scientists is “off the charts.” The U.S. Bureau of Labor Statistics (BLS) expects the job market for data scientists to grow at a rate more than triple the national average. The job site Glassdoor also ranked data scientist jobs as the best in the United States in 2019, marking the occupation’s fourth consecutive year atop that list. Industries across the country need data scientists, and this demand doesn’t appear to be changing anytime soon.

Becoming a data scientist doesn’t happen overnight. Data scientists have in-depth knowledge of computer technology, including programming languages and computer systems. They also know how to use software and analysis to work with large amounts of data. Continue reading to explore what data scientists do, the future job market for data scientists, and how to enter this potentially high-paying, intellectually challenging field. 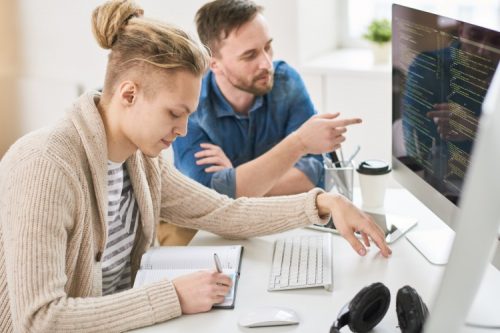 What Is a Data Scientist?

Data scientists are data experts. Corporations and governments collect massive amounts of data, generated every second of every day by people around the globe. Smart devices, apps, websites, and even clicks are all tracked and stored in giant server vaults, ready for data scientists to sort through and analyze. Data scientists are in high demand because that data can serve many different purposes. For example, government researchers can use data to make policy recommendations to politicians, clothing companies can use customer data to better manage the production and distribution of products, and financial institutions can use data to analyze potential investments.

Yet data scientists are more than just analysts. They know not only how to read and interpret data but also how to manage, store, and protect it. They use programming languages to build data management software and create hardware and network systems to store this information. They understand how to analyze gaps and vulnerabilities in data security to mitigate threats. Data scientists also test systems and work with software engineers to correct issues and improve network functionality, making it easier for analysts and customers to leverage information.

Data scientists’ skills are well-rounded, and because data is ubiquitous throughout business and political institutions, these professionals have become must-have staff members in many industries. As advanced hardware and software, such as facial recognition cameras and artificial intelligence (AI), continue to help companies compile more data, they will increasingly rely on the insights of data scientists.

Explore the Demand for Data Scientists

According to the BLS, there were 31,700 professionals working in the category of computer and information research scientists in the United States as of May 2018. More than a quarter of these professionals (28%) worked for the federal government. Another 20% worked for computer systems design and related firms; 16% for research and development in physical, engineering, and life sciences; 8% for colleges and universities; and 5% for software developers. Data scientists also frequently find employment in manufacturing, engineering, finance, insurance, and healthcare.

The BLS projects the domestic job market will add 5,200 new computer and information research scientist positions between 2018 and 2028. That’s a market growth of 16%, whereas the national average for all jobs is 5%. The BLS expects computer systems and related design firms to grow 42.9% over those 10 years, with 2,800 new jobs in that sector alone.

Computer and information research scientists earned a median annual salary of $118,370 as of May 2018, though pay varies with industry, experience, and geographic location. The highest-paying industry was software publishing, which paid a median annual salary of $140,220. Research and development in the physical, engineering, and life sciences was next at $128,570, followed by computer systems design and related services ($124,220), the federal government ($109,810), and colleges and universities ($82,660).

Becoming a data scientist requires an advanced degree in data science — one that builds on a foundation in information technology and computer systems. As the demand for data scientists continues to grow, many lucrative jobs will open up to those with the proper skills. Whether in healthcare, software design, or higher education, data scientists are helping industries reach their potential. Find out more about how Maryville University’s online Master of Science in Data Science –– with courses in machine learning, big data analytics, experimental design, data mining, and more –– can prepare you to step into a challenging and rewarding job in this field.

The Future of Artificial Intelligence in Work and Everyday Life

CIO, “15 Data Science Certifications That Will Pay Off”

Forbes, “IBM Predicts Demand for Data Scientists Will Soar 28% by 2020″

InsideBigData, “The Role of the Data Scientist Is in High Demand, but What Does It Take to Fill the Job?”

LinkedIn, “Why It’s Really Good to Be a Data Scientist Right Now”

TechRepublic, “Why Data Scientist Is the Most Promising Job of 2019”