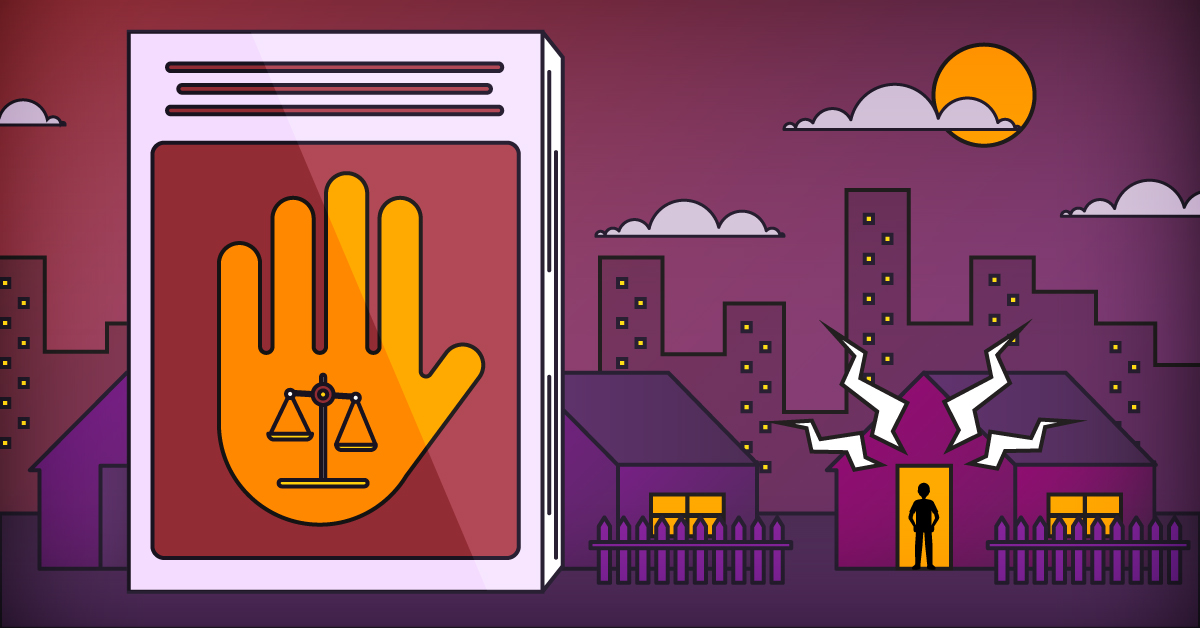 Victims of domestic violence need access to lifesaving information and emotional support to navigate the legal system, seek justice, and heal. That’s why domestic violence victim advocates are a vital resource. These professional advocates help victims receive the resources and assistance they need to cope and move forward as survivors.

Victim advocacy is a rewarding, complex profession, which requires the development of core interpersonal skills and crisis training experience. Read on to learn more about what victim advocacy entails and how to build a career as a domestic violence victim advocate.

What Is a Domestic Violence Victim Advocate?

Domestic violence victim advocates may be on call to provide support as needed and help victims make crucial decisions in the legal and recovery process. 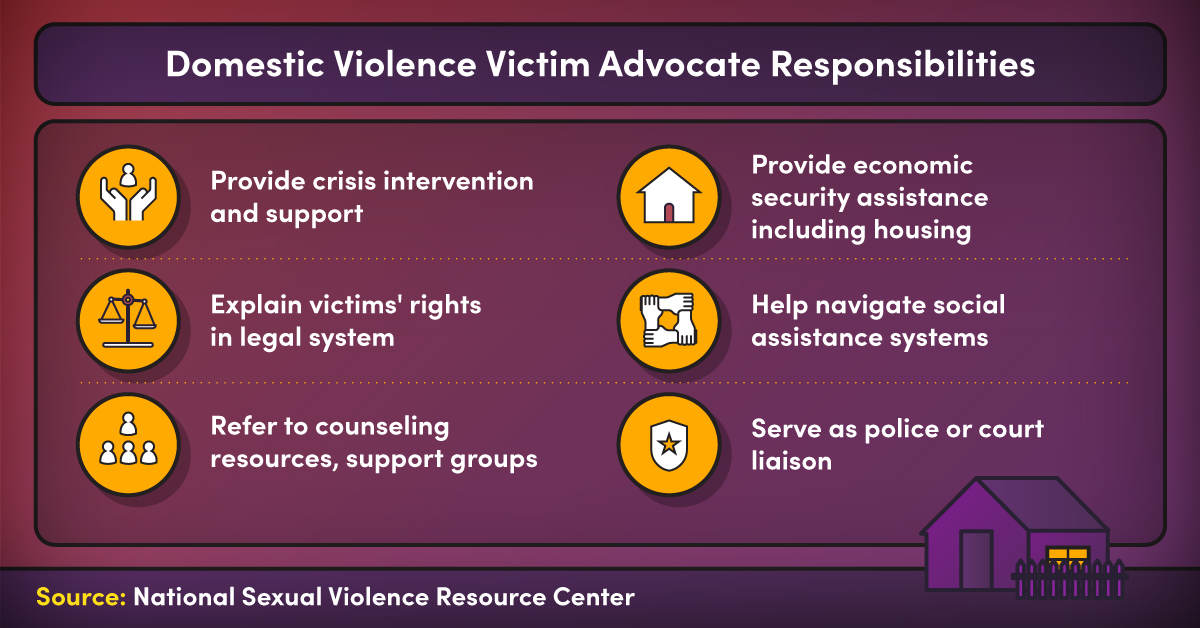 Victim advocates can serve a range of roles in different work settings. Various types of victim advocacy roles include the following:

Community advocates work with victims regardless of whether those victims have reported a crime. Victims may find them through shelters, hotlines, or nonprofit organizations. Community advocates’ only job is to help the victim through the process of recovery and keep all information confidential.

System-based advocates work with victims who are navigating the criminal justice system. They may be stationed in police departments or law offices. Their job is to help victims understand their legal rights and case statuses, and they’re usually obligated to share necessary information with their agency or office.

Why Do We Need Victim Advocates?

Victims of domestic violence need to feel safe and heard. After experiencing abuse, they may endure trauma that will have short- and long-term effects on their physical and mental health. Victim advocates step in to be trusted confidants and resources for those in need who may not have anywhere else to turn.

As reported by the Battered Women’s Justice Project, a study in the mid-1980s revealed that women who had worked with advocates for two weeks after leaving a shelter experienced less violence and depression, and greater access to resources and emotional support than those who hadn’t worked with advocates. A more recent study, from 2013, found that proactive outreach from advocates to victims resulted in increased participation in the criminal justice process and greater benefits for the victims.

Along with providing vital emotional support and medical care, advocates also help victims access important legal information and assistance, so they can safely and productively take the next steps to rebuild their lives. Criminal justice systems, hospitals, and police stations can be confusing and difficult to navigate, especially for people who are recovering from violence and abuse. Victim advocates are there to accompany victims to meetings, appointments, interviews, and court dates if needed.

Domestic violence isn’t just physical; it can take many different forms, be difficult to detect and recover from, and evolve over the course of a domestic relationship. Common types of domestic violence include the following:

It’s important to remember that domestic violence often doesn’t occur just once. Abusers often establish patterns of abuse, which can emerge at any stage of a relationship and become more severe over time. Abusers may also use many different types of violence, such as the ones listed above, to establish control and harm their victims.

Who Is Involved in Domestic Violence?

Victims of domestic violence can be any age, gender, and relation. Perpetrators of domestic violence can be partners, spouses, parents, guardians, roommates, or other family members or cohabitants. Abuse can also impact witnesses and other family members or close relations. Children of parents with an abusive relationship, for example, may experience emotional or mental health difficulties as a result of living in an abusive household.

As the Office for Victims of Crime reported, it may be difficult for others to identify abusers because they’re often not violent in other relationships. Abusers also deny accusations of abuse or shift the blame to the victim.

Abusers may exhibit certain behaviors or characteristics that can contribute to or indicate abuse. Warning signs of domestic violence include the following:

Factors such as abusive family background, history of felony or misdemeanor crimes, drug and alcohol abuse, and mental illness can also contribute to abusive behavior, though they’re not excuses for it or often the sole reasons behind it. 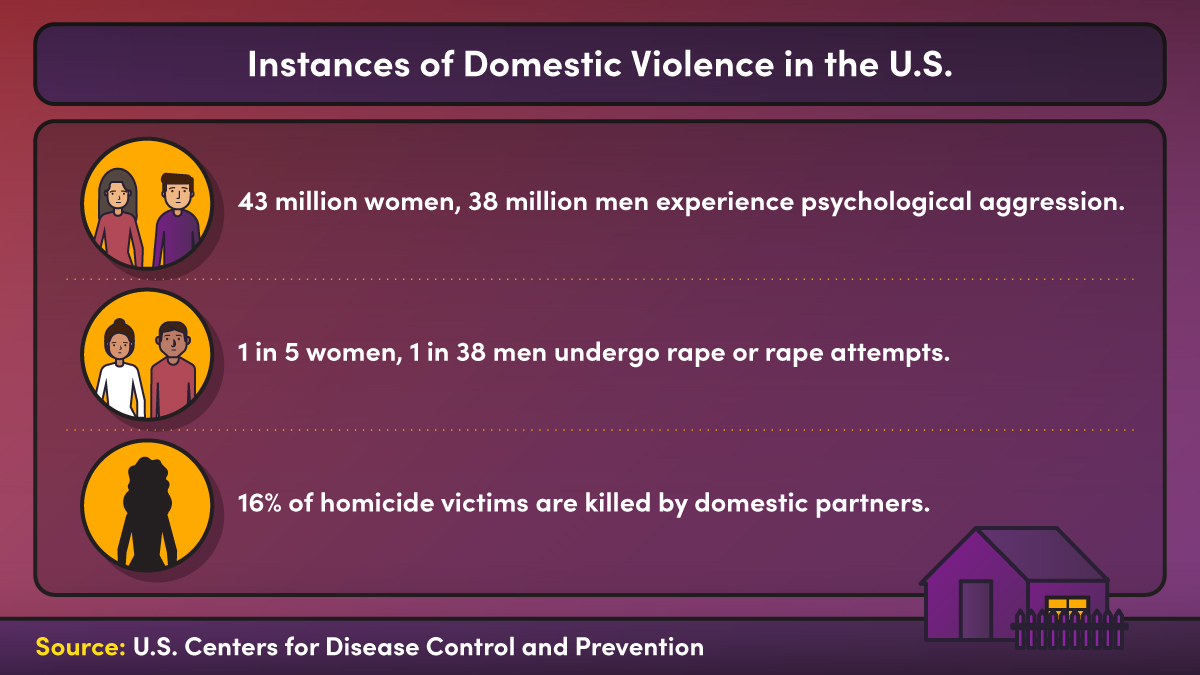 Consider these domestic violence facts when researching this field and career:

Where to Find Victim Advocate Training

Victim advocacy is a complex, emotionally demanding career. That’s why it’s so important for prospective professionals in this role to complete victim advocacy training and obtain the knowledge and skills they need to build successful careers.

Future advocates can complete victim advocate training by working with the following types of organizations:

This educational experience can further help advocates pursue advanced certifications through organizations such as the National Organization for Victim Assistance (NOVA).

The Future of Victim Advocacy

Advocates play a crucial role in helping victims of domestic violence heal and take the next steps in their lives. They can speak for advocates who can’t find their voice, and stand by them as they navigate difficult situations and justice systems.

According to the U.S. Bureau of Labor Statistics, careers in psychology, such as domestic violence victim advocates, are expected to grow by 14% from 2018 to 2018 as demand for services in hospitals, mental health centers, social service organizations, and schools increases. Advocates can be there to help victims and survivors of violence receive the resources and support they need to recover and heal.