Types of Speech and Language Disorders

On the evening of September 3, 1939 — the day the United Kingdom declared war on Germany — King George VI delivered a speech to the people of his country. He began, “In this grave hour, perhaps the most fateful in our history, I send to every household of my peoples, both at home and overseas, this message, spoken with the same depth of feeling for each one of you as if I were able to cross your threshold and speak to you myself.” The speech not only comforted and galvanized a nation but also prompted other political leaders to support the Allied Forces, leading to Germany’s eventual defeat in World War II. 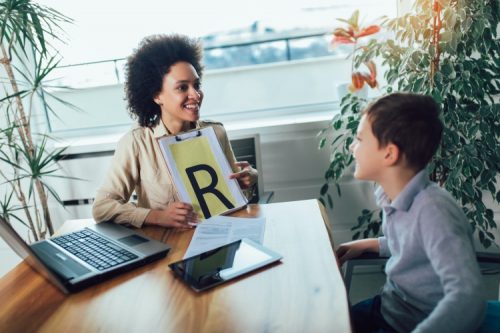 Just as impressive as the inspiring delivery of his message was the king’s journey to the podium. George VI had suffered from a debilitating stutter that impeded his ability to speak, particularly in public. The 2010 film The King’s Speech documented his journey with speech therapist Lionel Logue as they worked through innovative methods to overcome the speech disorder.

The film details just one aspect of the work that speech and language disorder specialists do, but speaks volumes about the impact they can have on their clients’ lives. Continue reading to explore the different types of speech and language disorders these specialists treat in children and adults, as well as how to step into this role and create meaningful change in all kinds of patients’ lives.

According to the American Speech-Language Hearing Association (ASHA), roughly 40 million Americans have some type of communication disorder, which is any disorder that impacts an individual’s ability to comprehend and create language. Additionally, ASHA estimates that roughly 5% of children have noticeable speech disorders by first grade.

Many adults experience various types of speech and language disorders that developed when they were children. Other adults develop them as a result of injury or stroke. Left untreated, these disorders can cause communication difficulties, create feelings of isolation, and impact professional success.

Who Treats Speech and Language Disorders?

Depending on the type of speech and language disorder, any of several professionals versed in the field might assist in assessment, diagnosis, and treatment. A few of the possible careers in this field are below.

Audiologists are hearing specialists who prevent, diagnose, and treat ear, hearing, and balance disorders in young children, adolescents, and adults. These specialists work in all sorts of environments, including private practices, clinics, hospitals, and personal care stores. Typically, to attain this job title, professionals must earn a doctoral degree and licensure in their state. For their advanced skills, audiologists receive a median annual salary of $75,920, according to the U.S. Bureau of Labor Statistics (BLS). The field for audiologists is growing, with an anticipated 16% increase in jobs between 2018 and 2028.

Speech-language pathologists (SLPs), commonly referred to as speech-language therapists, prevent, assess, diagnose, and treat speech, communication, and swallowing disorders in people of all ages. SLPs work in healthcare facilities of all kinds and also commonly work in schools. They have a minimum of a master’s degree in the field, though many also hold a doctoral degree. Most states require that they have a license. As of May 2018, SLPs earn an annual median salary of $77,510, according to the BLS, which projects the field to grow by 27% between 2018 and 2028, significantly above the national average of 5%.

Many of the disorders described above require the expertise of a medical doctor (MD). Physicians work in hospitals, private practices, clinics, and community health centers, where they offer care to adults and children of all ages. Medical doctors can treat many types of speech and language disorders, though they may refer patients to a specialist (such as an audiologist or speech-language pathologist) in some cases. According to the BLS, physicians and surgeons earn a median annual salary of $208,000 annually, though this pay can vary based on experience and location. The BLS predicts the demand for such professionals will increase by 7% between 2018 and 2028.

Communication is an essential part of being human. Professionals in the field of speech and language help people achieve their full potential when it comes to oral communication. Beginning a career in this field requires establishing a foundational understanding of speech and hearing science, audiology, counseling skills, and more. Maryville University’s online Bachelor of Science in Communication Sciences and Disorders equips students with the skills they need to continue in the field and make a difference in others’ lives. Find out more about how this degree can serve your goals in treating speech and language disorders.

Professional Fluency: How to Become a Speech-Language Pathologist

Centers for Disease Control and Prevention, Language and Speech Disorders in Children

Speech-Language and Audiology Canada, Why Is Communication Health Important?