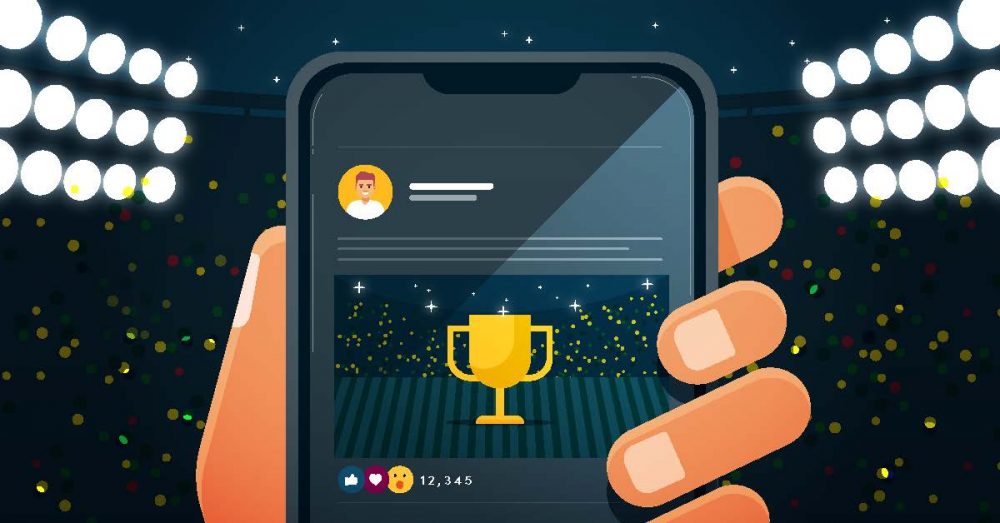 Social media and sports go together like peanut butter and jelly:

Professional and amateur athletes, as well as teams, organizations, schools, and sports business professionals, are finding that social media is a double-edged sword: Use it right, and you boost your profile with fans, colleagues, and the public in general; use it wrong, and watch your reputation take a hit and your career flounder.

This guide will help athletes and others involved in the sports business take advantage of the benefits that can accrue from social media while avoiding the pitfalls that can sabotage a team’s or school’s reputation or deep-six an athlete’s career.

Social media provides athletes with a powerful platform for communicating directly with fans and the public. However, the Undefeated points out that the influence most athletes can exert on social media is limited by the fear of repercussions that could damage their careers or reflect poorly on their teammates, teams, and sport.

For example, two of the NFL’s best young players, Kyler Murray of the Arizona Cardinals and Nick Bosa of the San Francisco 49ers, were forced to walk back tweets they wrote while in college.

Athletes and social media can make for a volatile combination, but with forethought, tools such as Twitter, Instagram, and Facebook can enhance players’ public image and, by extension, their careers.

How Athletes Are Using Social Media

Athletes use social media to increase their market value and raise awareness of social issues, as Money Smart Athlete describes. Athletes are encouraged to treat social media as a business: The goal is to present a positive image and promote future earnings for themselves and the people around them.

Resources for Athletes and Social Media

Social media provides teams with new avenues for distributing information about the organization and its athletes and fans. Other benefits of social media in sports include the opportunity to engage with fans directly and in real time as games are played, and to reach new audiences around the world, as The Sport Digest explains.

In addition to building relationships with fans, social media can help sports organizations boost sales while reducing marketing costs. By entering into two-way conversations with fans, teams can build their brands on an individual level in a way that no other medium can match.

The success of a sports team’s social media campaigns depends on providing compelling content that connects with fans and the public in general. Forbes highlights the social media strategy that the NBA has adopted that has rallied fans around recent NBA champions, including the Toronto Raptors and Golden State Warriors. 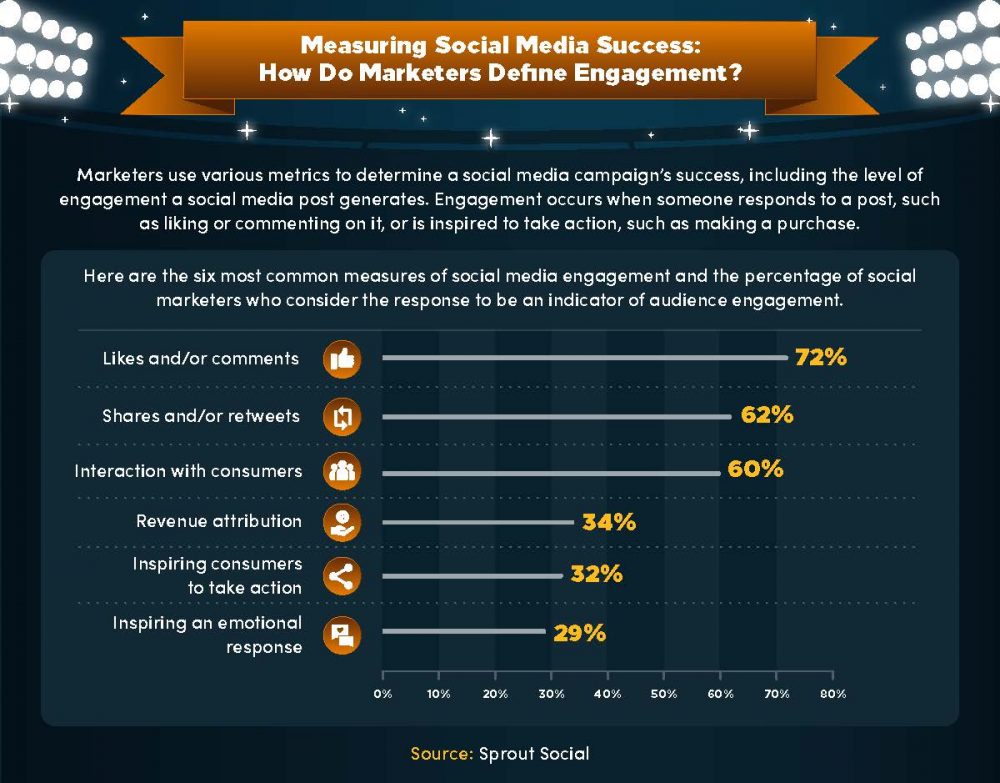 Marketers use various metrics to determine a social media campaign’s success, including the level of engagement a social media post generates. Engagement occurs when someone responds to a post, such as liking or commenting on it, or is inspired to take action, such as making a purchase. Here are the six most common measures of social media engagement and the percentage of social marketers who consider the response to be an indicator of audience engagement: likes and/or comments, 72%; shares and/or retweets, 62%; interaction with consumers, 60%; revenue attribution, 34%; inspiring consumers to take action, 32%; and inspiring an emotional response, 29%.

How to Succeed in Using Social Media in Sports Marketing

Fans are key to any sports organization’s success. Today, sports fans rely increasingly on their social media feeds to keep informed about news that affects their favorite teams. This creates a great opportunity to leverage social media in sports marketing to enhance engagement; establish one-to-one relationships with fans; and tell the stories of the team and its players, coaches, and avid supporters.

Social Media HQ points out that first and foremost, social media is a platform for storytelling. The stories may recount how an underdog rose up to beat the odds, how team rivalries developed through the years, and the unique ways fans find to celebrate their favorite teams. The goal of sports marketing professionals is to “amplify the passion of fans” from game to game and season to season.

An example of a team that built on its fans’ ardor via social media is the New Orleans Saints, which promotes the Twitter hashtag #whodat to sustain its fan base’s enthusiasm through a season’s ups and downs, and during the long offseason. 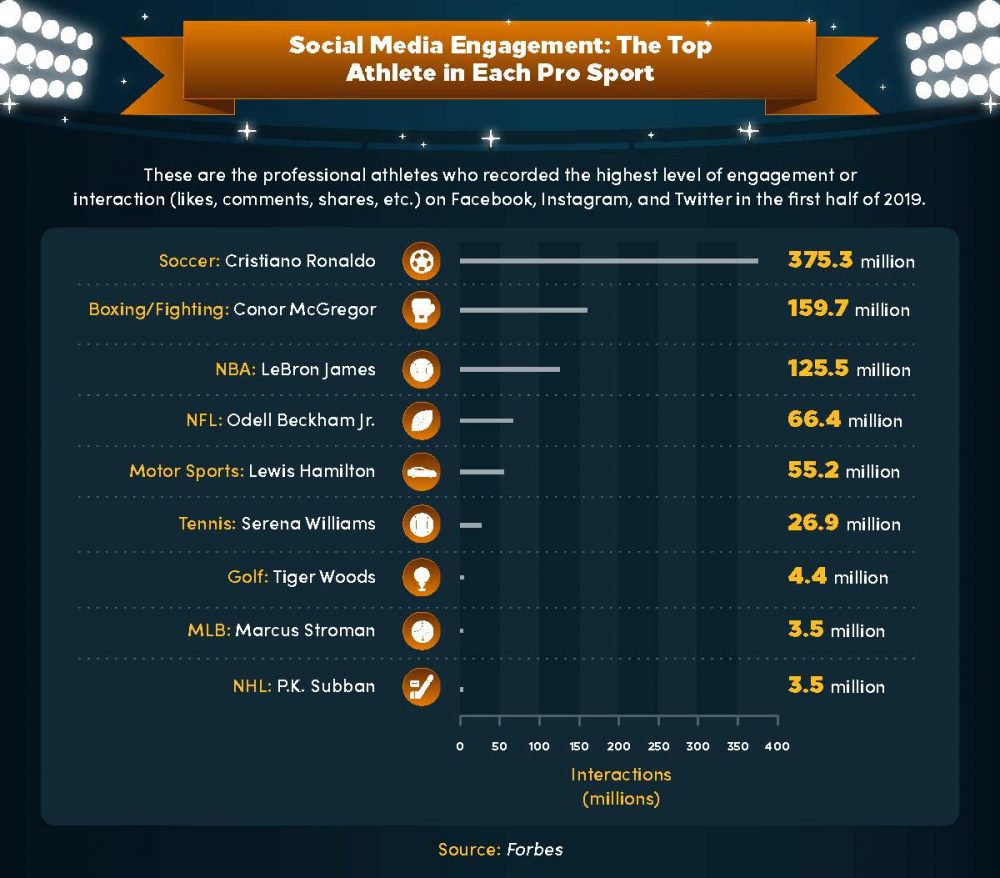 Recent changes to NCAA regulations will transform social media in college sports, affecting the ability of college athletes to monetize their name, image, and likeness (NIL), as MediaPost describes. Business interests unaffiliated with their schools will compensate student athletes, including for personal appearances and social media businesses.

A primary reason for the change was to allow student athletes, such as University of Miami quarterback Tate Martell, to capitalize on opportunities as social media influencers. Martell has more than 250,000 Instagram followers and nearly 150,000 Twitter followers, for example. Analysts note that students have long been able to earn money as musicians, actors, journalists, and other professions while enrolled in school.

How Colleges Benefit from Their Use of Social Media

For many years, college and university administrators emphasized the prevention of inappropriate content sharing by student athletes. Recently, the focus has shifted to promoting the school and its athletic programs and successes in fields other than sports, while also honoring athletes’ accomplishments.

Social media has broadened the role of college athletes as representatives of their schools and programs. The Journal of Public Relations Education reports on the results of a study examining the training that athletes receive from colleges and universities about appropriate social media use. Athletes participating in high-profile sports are closely scrutinized on social media, including by their own athletic departments.

Just as elite college athletes are trained to handle media interviews, they must be taught the importance of communicating positive messages about the school, the athletic program, and themselves via social media.

The No. 1 rule for college sports organizations’ social media activities is to keep up with the audience. The Drum identifies social channels as one of the trends that will drive sports marketing in the future. Two benefits of social channels, such as Twitter and Instagram, are the ability to present “humanized” versions of college athletes and the 24/7/365 access the channels provide to a school’s marketing messages.

In addition to broadening the school’s fan base, social channels present it with more opportunities to capitalize on its brand, such as livestreaming Q&A sessions between athletes and fans. The college’s business partners could sponsor these and other activities.

Sharing Positive News Coverage About the College and Its Sports Teams

Livestreams that social media channels offer help schools report quickly and accurately on events affecting athletes, the school, the sports program, or the community. The NCAA’s Diversity and Inclusion Social Media Campaign is designed to raise awareness of the need to create inclusive environments in college sports and to ensure that the institution’s social media coverage represents the entire academic community.

The NCAA explains how colleges and universities can conduct training sessions with student athletes that focus on the benefits of inclusion and diversity in all campus environments. The guidelines include tips for ensuring that student athletes who are members of underrepresented groups are integral parts of the school community.

How Colleges Can Be Damaged by Their Use of Social Media

Every college and university has a student code of conduct that stipulates the activities that can lead to a student’s suspension, expulsion, or other punishment. Attorney Mary Nerino writes that these codes of conduct extend to a student’s actions on social media. Any student, school employee, or representative faces consequences — which may include criminal charges — for using social media to infringe on a person’s privacy or to harass, bully, or intimidate the person.

Responding Inappropriately to Negative Media Coverage of the College

Schools walk a tightrope when reacting to negative news reports. The ability to respond instantaneously to erroneous or questionable new stories must be balanced against the need to ensure that the college’s response doesn’t make matters worse.

The Evolllution explains that it’s up to the school’s leaders to formulate a response and decide the best time and manner to release the school’s response. However, depending on the circumstances, lack of an official response can exacerbate a bad situation. The key is for the school to develop contingency plans and indicate in some way that it’s aware of an event and is gathering more information.

It’s far too common for a college athlete or another representative of the school or its sports programs to promote a piece of social media content that turns out to be untrue. In such cases, the best course of action is to remove the erroneous post and add a brief explanation of why it was deleted.

As is often the case, preventing the dissemination of incorrect information is much easier and less painless than trying to undo the sharing. The Verge provides tips for spotting potentially inaccurate information, checking the veracity of the information with a trusted third party, and viewing the information in the most appropriate context.

Political activism on college campuses waxes and wanes, but social media plays an important role in many college students’ political lives. The University of Michigan’s National Center for Institutional Diversity points out that in the 2016 presidential election, young adults represented the largest proportion of unregistered potential voters.

Colleges can use social media to promote a sense of civic duty in students, helping to connect them to resources for registering to vote in their home districts via absentee ballot, for example. They can also provide resources to help student athletes communicate their views on the issues of the day in a clear, positive manner.

Rashod Bateman, a University of Minnesota student athlete, was one of the first athletes to respond on Twitter to George Floyd’s death. ESPN reports that Bateman’s coach, P.J. Fleck; other members of the university community; and coaches, players, and students at other schools quickly expressed their support for the vivid emotion and sentiment that Bateman expressed.

This and other social and political events have increased the impact that college athletes and sports programs can have via social media. The following guidelines help ensure that the messages have their desired effect:

Social Media and the Role of Sports Business Management

The complexity of managing the growing number of social media platforms combined with the speed of information’s spread in the internet age highlight the importance of having a sports management team in place that’s able to plan and implement strategies that boost athletes’ reputations and promote their teammates, coaches, and the entire organization. Twitter, Instagram, and other social media platforms present sports organizations with tremendous opportunities to connect with their fans and communities, but they also present many potential pitfalls that require skill and experience to sidestep.

Sprout Social, “The Most Important Social Media Trends to Know for 2020”