Should College Athletes Be Paid? Reasons Why or Why Not

Since its inception in 1906, the National Collegiate Athletic Association (NCAA) has governed intercollegiate sports and enforced a rule prohibiting college athletes to be paid. Football, basketball, and a handful of other college sports began to generate tremendous revenue for many schools in the mid-20th century, yet the NCAA continued to prohibit payments to athletes. The NCAA justified the restriction by claiming it was necessary to protect amateurism and distinguish “student athletes” from professionals.

The question of whether college athletes should be paid was answered in part by the Supreme Court’s June 21, 2021, ruling in National Collegiate Athletic Association v. Alston, et. al. The decision affirmed a lower court’s ruling that blocked the NCAA from enforcing its rules restricting the compensation that college athletes may receive.

Participating in sports benefits students in many ways: It helps them focus, provides motivation, builds resilience, and develops other skills that serve students in their careers and in their lives. The vast majority of college athletes will never become professional athletes and are happy to receive a full or partial scholarship that covers tuition and education expenses as their only compensation for playing sports.

Athletes playing Division I football, basketball, baseball, and other sports generate revenue for their schools and for third parties such as video game manufacturers and media companies. Many of these athletes believe it’s unfair for schools and businesses to profit from their hard work and talent without sharing the profits with them. They also point out that playing sports entails physical risk in addition to a considerable investment in time and effort.

Why are college athletes not getting paid by their schools?

The reasons why college athletes aren’t paid go back to the first organized sports competitions between colleges and universities in the late 19th century. Amateurism in college sports reflects the “aristocratic amateurism” of sports played in Europe at the time, even though most of the athletes at U.S. colleges had working-class backgrounds.

By the early 20th century, college football had gained a reputation for rowdiness and violence, much of which was attributed to the teams’ use of professional athletes. This led to the creation of the NCAA, which prohibited professionalism in college sports and enforced rules restricting compensation for college athletes. The rules are intended to preserve the amateurism of student participants. The NCAA justified the rules on two grounds:

NCAA rules also prohibited college athletes from receiving payment to “advertise, recommend, or promote” any commercial product or service. Athletes were barred from participating in sports if they signed a contract to be represented by an agent as well. As a result of the NIL court decision, the NCAA will no longer enforce its rule relating to compensation for NIL activities and will allow athletes to sign contracts with agents.

For decades, colleges and universities have operated under the assumption that scholarships are sufficient compensation for college athletes. Nearly all college sports cost more for the schools to operate than they generate in revenue for the institution, and scholarships are all that participants expect.

But while most sports don’t generate revenue, a handful, notably football and men’s and women’s basketball, stand out as significant exceptions to the rule:

Many major colleges and universities generate a considerable amount of money from their athletic teams:

What are name, image, likeness agreements for student athletes?

In recent years some college athletes at schools that field teams in the NCAA’s highest divisions have protested the restrictions placed on their ability to be compensated for third parties’ use of their name, image, and likeness. During the 2021 NCAA Division I basketball tournament known familiarly as March Madness, several players wore shirts bearing the hashtag “#NotNCAAProperty” to call attention to their objections.

Following the decision in NCAA v. Alston, the NCAA enacted a temporary policy allowing college athletes to enter into NIL agreements and other endorsements. The interim policy will be in place until federal legislation is enacted or new NCAA rules are created governing NIL contracts for college athletes.

Within weeks of the NCAA policy change, premier college athletes began signing NIL agreements with the potential to earn them hundreds of thousands of dollars.

How will the change affect college athletes and their schools?

The repercussions of court decisions and state laws that allow college athletes to sign NIL agreements continue to be felt at campuses across the country, even though schools and athletes have received little guidance on how to manage the process.

The presidents and other leaders of colleges and universities that field Division I sports have not yet responded to the changes in college athlete compensation other than to reiterate that they do not operate for-profit sports franchises. However, the NCAA requires that Division I sports programs be self-supporting, in contrast to sports programs at Division II and III institutions, which receive funding directly from their schools.

Many members of the Power 5 sports conferences have reported shortfalls in their operations, leading analysts to anticipate major structural reforms in the governing of college sports in the near future. The recent changes have also caused some people to believe the NCAA is no longer relevant or necessary. 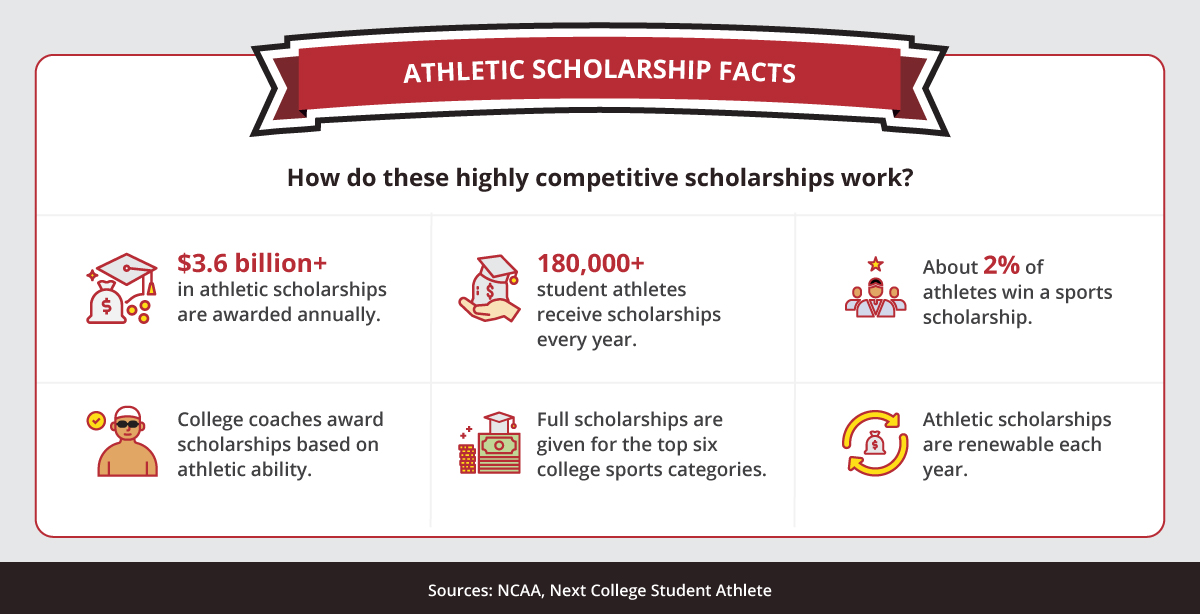 How do student athlete scholarships work?

The primary financial compensation student athletes receive is a scholarship that pays all or part of their tuition and other college-related expenses. Other forms of financial assistance available to student athletes include grants, loans, and merit aid.

When most people think of a student athlete scholarship, they have in mind a full-ride scholarship that covers nearly all college-related expenses. However, most student athletes receive partial scholarships that may pay tuition but not college fees and living expenses, for example.

These Division I sports distribute scholarships per head count:

These are among the Division I equivalency sports for men:

These are the Division I equivalency sports for women:

How college athletic scholarships are awarded

In most cases, the coaching staff of a team determines which students will receive scholarships after spending time scouting and recruiting. The NCAA imposes strict rules for recruiting student athletes and provides a guide to help students determine their eligibility to play college sports.

Once a student has received a scholarship offer from a college or university, the person may sign a national letter of intent (NLI), which is a voluntary, legally binding contract between an athlete and the school committing the student to enroll and play the designated sport for that school only. The school agrees to provide financial aid for one academic year as long as the student is admitted and eligible to receive the aid.

After the student signs an NLI, other schools are prohibited from recruiting them. Students who have signed an NLI may ask the school to release them from the commitment; if a student attends a school other than the one with which they have an NLI agreement, they lose one full year of eligibility and must complete a full academic year at the new school before they can compete in their sport.

Very few student athletes are awarded a full scholarship, and even a “full” scholarship may not pay for all of a student’s college and living expenses. The average Division I sports scholarship in the 2019-20 fiscal year was about $18,000, according to figures compiled by ScholarshipStats.com, although some private universities had average scholarship awards that were more than twice that amount. However, EducationData.org estimates that the average cost of one year of college in the U.S. is $35,720. They estimate the following costs by type of school. 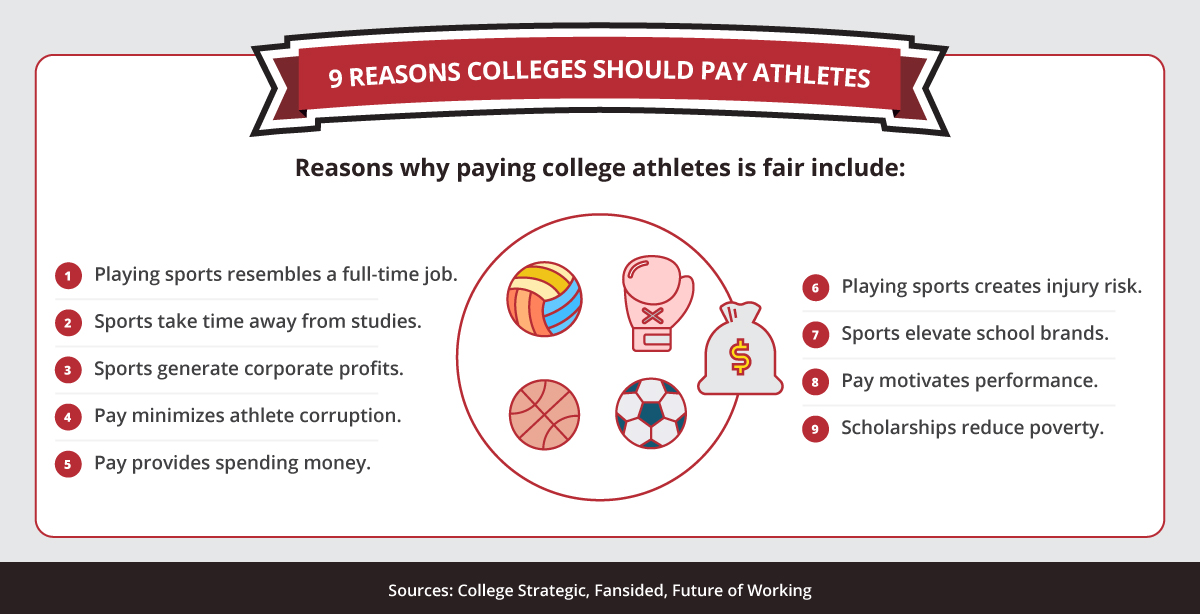 What are the pros and cons of compensation for college athletes?

Reasons why student athletes should be paid

The argument raised most often in favor of allowing college athletes to receive compensation is that colleges and universities profit from the sports they play but do not share the proceeds with the athletes who are the ultimate source of that profit.

Reasons why student athletes should not be paid

Opponents to paying college athletes rebut these arguments by pointing to the primary role of colleges and universities: to provide students with a rewarding educational experience that prepares them for their professional careers. These are among the reasons they give for not paying student athletes. 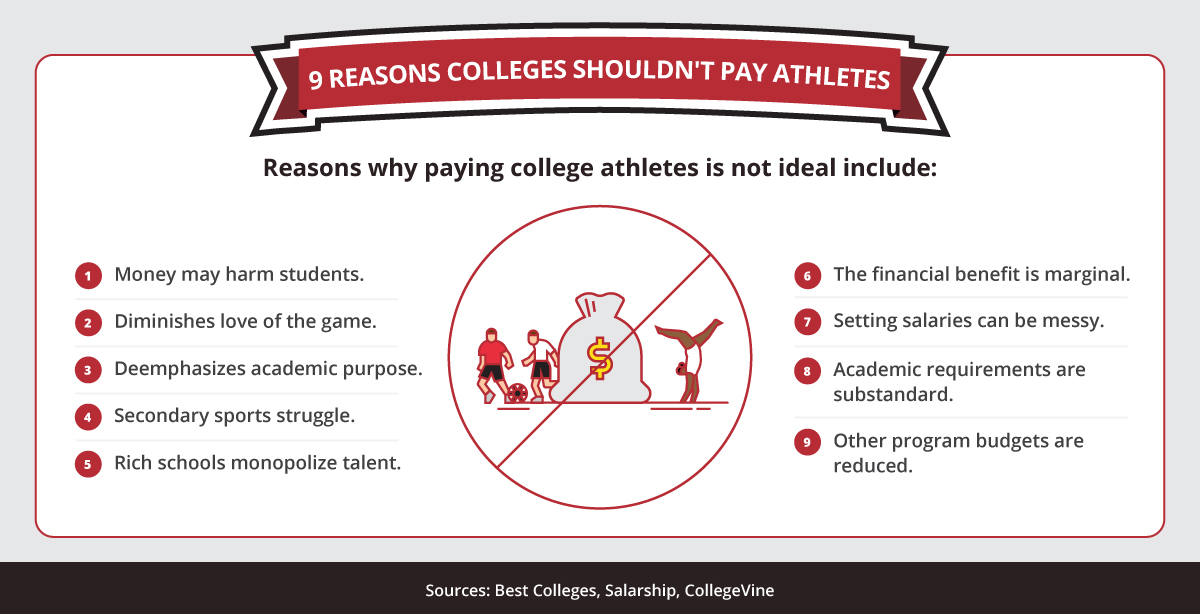 How do college athlete endorsements work?

Soon after the Supreme Court released its decision in NCAA v. Alston, the NCAA issued guidelines for schools that allow college athletes to make money from product endorsements, social media accounts, autographs, and other uses of their name, image, or likeness. This counters the NCAA’s longstanding opposition to student athletes profiting from endorsements. At present, implementation of the guidelines varies from school to school and state to state, which means athletes at some institutions may benefit more from NIL agreements than those attending other schools.

Several NIL consultancy firms are actively soliciting endorsements from college athletes in the aftermath of the rule change.

Despite the rush of high-profile college athletes signing endorsement deals, some educators and analysts express concern about the impact of the endorsements on schools, athletes, and college sports.

Keeping education at the center of college sports

From the onset of intercollegiate sports, students have benefited from their participation by learning dedication to their sport, building relationships, and being part of a team. Sports allow students to acquire many important values, such as fair competition and physical and mental health. Education should remain at the forefront of all aspects of college, including sports, whether or not collegiate athletes are paid.

College Strategic, “Why College Athletes Should Be Paid”

CollegeVine, “Should College Athletes Be Paid? Pros and Cons”

Future of Working, “17 Advantages and Disadvantages of Paying College Athletes”

Next College Student Athlete, “What Are the Different Types of Offers I Could Get?”

Salarship, “Should College Athletes Be Paid: Pros and Cons”