Helping Out on Different Scales: NGOs vs. Nonprofits

Across the globe, millions of organizations are making the world a better place. They work in major cities and remote areas — in some of the wealthiest nations on Earth, as well as some of the poorest. These organizations assist individuals, small businesses, communities, and governments. They work in medicine, education, public health, human rights, foreign policy, environmental protection, and more. 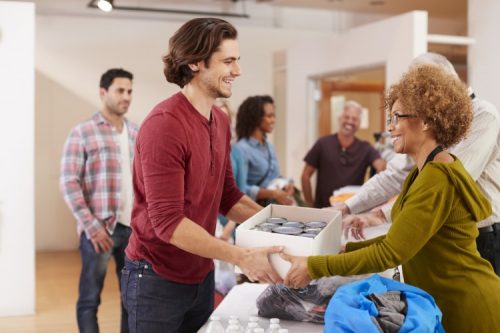 Nonprofits and nongovernmental organizations (NGOs) play an influential role in both local and global affairs. They range from massive, multinational organizations with thousands of employees and many more volunteers to grassroots movements in a single neighborhood. Though NGOs and nonprofits often share similar goals, there are some key differences that set them apart. Continue reading to find out more about NGOs vs. nonprofits, some prominent organizations working in each sphere, and how you can enter a profession in either one.

Nongovernmental organizations are politically influential, multinational bodies that use their size and monetary power to push for large-scale changes in countries, cities, and other geographic regions. Frequently serving in major crisis areas, NGOs are often staffed by idealistic professionals who want to make the world a better place, and many have succeeded in making an impact.

Many of the world’s most recognizable nongovernmental organizations are so widespread that people might not know they are NGOs. Here are some of the most prominent:

There are more than 1.5 million nonprofit organizations in the United States alone. Many of the nonprofits most familiar to readers might be local organizations, but here are a few prominent national ones:

Similarities Between NGOs and Nonprofits

Both NGOs and nonprofit organizations promote the public good. Though they can approach that aim differently, they often work in the general fields of medicine, education, and social, economic, and political justice. Most NGOs and nonprofits have special taxation classifications; they’re not required to pay the same taxes on income as businesses would, because they generate most of their income through donations, grants, and endowments rather than the sale of a product or service. All NGOs are nonprofit organizations, but not all nonprofits are NGOs.

Differences Between NGOs and Nonprofits

While NGOs and nonprofit organizations may have similar missions and visions, there are two primary differences that set them apart: the typical scale on which they operate and their ability to influence politics.

Nonprofit organizations tend to be smaller and locally based. For example, a nonprofit might be a group of citizens who help maintain a park’s trails or the wing of a professional sports team that supports athletics at local public schools. While they can grow over time into nationally operating nonprofits, many begin as local organizations with a small focus.

NGOs, on the other hand, are multinational organizations with tens of thousands of employees and potentially millions of volunteers. Though they might start small, their missions are typically aimed at creating a big impact, such as improving medical care throughout a given continent or providing housing in underdeveloped countries.

As massive, multinational organizations with a broad mission to improve life on a large scale, NGOs must have reach across political and geographic landscapes. It’s important for these organizations to have a lobbyist on staff or political connections to facilitate their work across borders and in national politics.

NGOs vs. Nonprofits: Which Organization Type Is Right for You?

Working in an NGO or nonprofit organization can be rewarding, offering the opportunity to make a difference in the lives of thousands of people in your community and beyond. Explore how a degree such as Maryville University’s online Bachelor of Arts in International Studies can help you prepare to make a big impact in either type of organization through foundational coursework in intercultural studies, foreign languages, and economics. Equipped to communicate effectively and understand the systems that underpin work in either organizational structure, you’ll be ready to work to promote good at an NGO or nonprofit.

Doctors Without Borders, Who We Are

Habitat for Humanity, “40 Facts About Habitat and Housing”

International Committee of the Red Cross, Who We Are

Investopedia, “What Is an NGO?”

National Council of Nonprofits, “What Is a Nonprofit?”