Putting off tasks until later can affect your productivity in various ways. While many people believe that procrastination is a bad thing, that’s not always the case. For example, whereas some students work best when they break up assignments, such as splitting a 3,000-word essay into more digestible 600-word sections, others thrive under pressure, performing best when they dive into a project at the last minute. If you have a habit of delaying tasks, but it hinders your productivity, you can use several strategies to help get yourself back on track.

People delay tasks for various reasons, such as fear of criticism, fear of failure, lack of interest, and perfectionism.

Think about an especially challenging course you’ve taken. How successful were you in completing your assignments on time? If you had a habit of putting off writing papers or reading assigned pages, your procrastination may have been driven by a fear of failure or criticism. Other causes for putting off tasks can include feeling overwhelmed by the task or struggling with larger motivational issues such as anxiety or depression.

Others delay starting tasks or taking action because they’re not interested in a project or assignment. For example, if you dread making spreadsheets and were assigned to prepare one for a Friday morning meeting, if you didn’t start until Thursday night, you likely procrastinated because you were task averse. 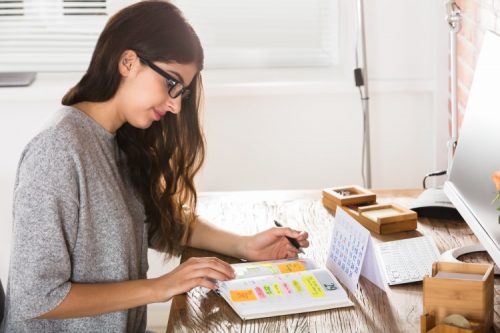 Perfectionism can also spur procrastination. Leonardo da Vinci famously spent 16 years working on the Mona Lisa and left many other works unfinished. Mozart was a procrastinator who worked best under pressure: He wrote the entire overture for Don Giovanni the night before the opera was set to debut.

One myth about procrastination is that it’s linked to poor time management, but people who are perfectly good at planning may delay tasks they find intimidating, confusing, or boring.

People often mistakenly assume that all procrastinators are lazy. While laziness can lead to procrastination, sometimes people put off a task out of other reasons such as fear. A person with unexplained weight loss, for example, might delay visiting their doctor because they’re worried about what they might learn.

Another myth about procrastination is that it is always bad, but sometimes waiting to begin a project is better time management. For example, if you have a paper due on a Monday, waiting until the weekend to begin — when you can devote long stretches of time to the project rather than continually stopping for classes and work — may be a good thing.

Procrastination, which means delaying tasks or projects until a later time regardless of their urgency, and prioritization, which means reorganizing tasks to address the most important ones (or those with the most pressing deadlines), are not the same. Putting off writing a paper until the day before it’s due is procrastination. However, waiting to start a paper for one class until the next Monday because you have an exam for another class on Friday is prioritization — studying for the exam takes priority over starting the paper based on assumed deadline sequence in this scenario.

Pitfalls and Benefits of Procrastination

One danger of procrastination is that it can affect academic performance. Rushing to complete an assignment at the last minute may lead to mistakes, and for in-depth projects such as term papers, less time to consider an issue can lead to shallower analysis. Medical research has also shown that procrastination can lead to higher levels of stress, anxiety, fatigue, and depression, according to a study published in PLoS One.

Procrastination can have benefits, however. Some people find that waiting until the last minute can boost creativity — that the pressure of an impending deadline leads to leaps of thought that a more traditional approach would not. Additionally, some suggest that procrastination teaches people how to manage delays. In Wait: The Art and Science of Delay, author and university professor Frank Partnoy claims that when people are faced with a decision, they should assess how long they have to make it. Waiting until the last possible minute, he writes, teaches people to manage delays, which can help them lead happier lives.

If you’ve found that your tendency to procrastinate is harming your performance at work or school, these strategies can help you break the habit:

Sometimes, delaying tasks can be a good thing. But in many cases, procrastination can lead to increased feelings of anxiety, panic, and self-doubt. If you want to procrastinate less, take an inventory of your own procrastination habits. Once you identify your triggers, you can take proactive steps to change the habits that don’t serve you well.

What to Do if You Don’t Get That Promotion

Fast Company, “These Are the 5 Reasons Why You Procrastinate”

GoodReads, Wait: The Art and Science of Delay

Medical News Today, “Is Procrastination Friend or Foe to Health and Creativity?”

PLoS One, “Procrastination, Distress and Life Satisfaction Across the Age Range — A German Representative Community Study”

Stunning Motivation, “10 Reasons Why People Procrastinate and How to Overcome It”

Thrive Global, “The Relation Between Procrastination and Productivity”