How to Join Esports: A Look Into Collegiate Esports

Dennis “Thresh” Fong is considered the first professional video game player in history, heavily responsible for putting competitive esports on the map following a five-year undefeated run in his game of choice, Quake, in the 1990s. After winning the 1997 Red Annihilation Quake Tournament, he was rewarded with a red Ferrari 328 GTS convertible that had belonged to one of Quake’s creators. 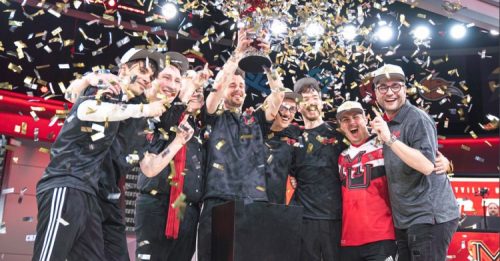 Esports has witnessed explosive growth in recent years, including a spike in new fans and worldwide cultural acclaim. According to Newzoo, the number of regular viewers of esports events jumped from about 400,000 in 2018 to about half a billion in 2020, with exposure and support continuing to increase.

Of course, professionals working behind the scenes are helping drive such growth. While esports often highlights players, careers in the industry can take many other forms as well, including roles as coaches, managers, event staff, talent agents, and technical crews.

Maryville University has supported esports at the collegiate level for a number of years. With multiple national championships to our name and two highly successful teams, we are proud to cultivate this rising field for our student-players. As the industry grows, the demand for sports professionals with the right education and experience to join esports is on the rise, and Maryville’s Bachelor of Science in Rawlings Sport Business Management online degree is at the forefront.

Esports refers to organized, competitive video game events with two or more participants. Some of these competitions are grassroots, local events run by fans, while at the highest level they operate on an international scale with millions of dollars in prize money.

According to Lineups, the current record-holder for largest esports turnout is 2018’s League of Legends Mid-Season Invitational, which netted an in-house audience of approximately 7,000 people, with over 60 million unique viewers watching online.

With this meteoric rise in popularity, more organizations are embracing the cultural impact of esports and its future. Sponsors support franchises and invest in large arenas, while universities have begun to integrate esports programs into their extracurriculars and beyond, with some providing sponsorship opportunities to high-performing student-players.

How to Get Into Esports

No one-size-fits-all approach exists for joining esports: People break into the industry in different ways. However, certain skills and strategies can increase the odds of establishing a career as an esports professional, many of which can be learned on a collegiate team.

For an individual whose goal is to become a player at the professional level, a number of different skills need to be cultivated through hours of dedication and smart learning tactics.

Several routes can lead to an esports career, and not everyone who participates is a player. Like any sport, the industry has numerous coaches, managers, agents, and technical professionals who work to create smooth online broadcasts and engaging in-person events.

Becoming a professional player requires dedication and intelligent practice. To first get into esports, aspiring pros need to choose a game. At present, some of the biggest household names in esports are League of Legends, Fortnite, Overwatch, Counter Strike: Global Offensive (CS:GO), and Dawn of the Ancients 2 (DOTA 2). Many other less popular options might also lead to a career, but these are currently the most important games for professionals.

After choosing a game, players need to learn as much as they can through constant practice, watching online pro streams, using guides, and reviewing their own matches to detect weaknesses in their play. By watching current professionals, new players can study the techniques and strategies of people who have already mastered the game.

For some players, starting a streaming channel of their own will keep them accountable and dedicated, as well as provide a platform on which they can measure their own progress. Saved streams can also function as a portfolio for their skills. Fortnite player “Tfue” was discovered on the streaming platform Twitch for his excellent play, and has since turned pro.

Once a player is ready, they should consider entering tournaments and competitions. Most have little to no fees and allow a player to make connections in the field, gain a reputation if they perform well, and possibly find or establish a team of their own.

Teams are a strong option for aspiring players. They create a sense of unified purpose, community, and direction, allowing each of the players to thrive. In the U.S., collegiate-level play is on the rise, with many colleges and universities supporting resident teams that compete locally and beyond.

Those who aren’t ready for competitive play but are still interested in an esports career have options similar to those available in traditional sports. Depending on their interests, they can pursue an education specifically tailored to their end goals, such as studying computer science or game design if they want to create the games that competitors play, or earning a degree in sports business management if they want to be a coach or manager.

Also in demand are professionals with skills in marketing, graphic design, audio engineering, franchise management, and social media management. Professional esports teams need experts in these areas to push forward the business and production aspects of the industry, and working in these capacities with a collegiate esports team is a great way to gain experience.

How to Join Esports at the Collegiate Level

The process for joining a college esports team is different at every school. Maryville divides its players into a varsity program and a community club, the former of which caters to aspiring Overwatch and League of Legends players, while the latter provides a less competitive atmosphere and includes teams for Rocket League, Counter Strike: Global Offensive (CS:GO), Hearthstone, and Rainbow Six Siege.

Tryouts for varsity teams usually happen in summer, with players selected and assigned to their teams by that fall semester. Players practice, build teams, and compete in our state-of-the-art esports performance center.

Maryville University has been championing collegiate esports for years, especially in our well-developed League of Legends program. Two of our best League of Legends players recently graduated into the ranks of professional play as proud members of the Golden Guardians, an esport affiliate tied to the NBA’s Golden State Warriors. Aiden “Niles” Tidwell and Ethan “Iconic” Wilkinson helped secure national championships in their time with Maryville, and both emphasize the importance their Maryville team had on cultivating their skills and winning mindset.

The Future of Esports

Because of its relatively short lifespan as a career, some conventional ways of measuring job outlook aren’t applicable to most esports positions. However, according to Newzoo, the esports audience is projected to grow by 10.4% each year between 2020 and 2023, and Grand View Research expects annual revenue for the industry to rise by 24.4% between 2020 and 2027. With these market indicators trending upward, it’s safe to say that esports will be a significant field for the foreseeable future. And with increasing audiences and ballooning revenues, careers for people interested in esports marketing and management will grow alongside the industry.

Stepping Up Your Game

As the frontier of this new industry continues to unfold, more people are turning their attention to esports. Over the past several years, esports has garnered recognition and support from sports giants such as ESPN, the NFL Network, and TBS.

Maryville University is proud to be on the front line of collegiate esports, housing two competitive teams that have won multiple HUE Invitational trophies — one of the largest collegiate esports events in the country. Maryville’s online Bachelor of Science in Rawlings Sport Business Management degree program combines a strong education with a unique online college experience. With courses such as Principles of Management, Sport Marketing, and Sport Finance, students learn the key principles to guide a successful career in esports. Team up with Maryville for a winning education today.

Ready Esports, “What Esports Jobs Are Available Other Than Gaming?”

TalkEsport, “How to Make Your Way to Join an Esports Team?”