How Future Police Officers Will Adapt to Trends in Law Enforcement

Criminals of all types are now turning to the internet to commit crimes. Individuals are stealing credit card information from online shoppers, running digital blackmail schemes and other scams via social media, and even participating in the sale of guns, drugs, and other illegal items on the internet. Future police officers will need to know how to address these issues and hold criminals responsible for their illegal online activities. 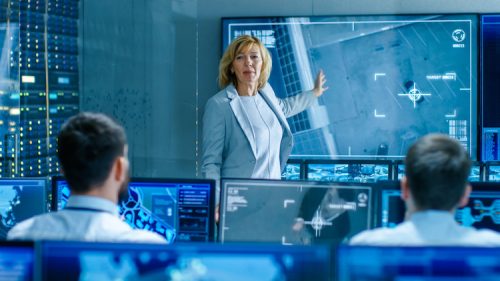 It’s not just the criminals who are making the most of social media platforms, as these sites contain data that enables police to more effectively fight crime.

Police officers are using social media monitoring tools to scan videos of crimes — some taking place in real time — as well as posts to find out what offenders are saying online so they can prevent crimes. Law enforcement is also monitoring social media to identify threats to community buildings and public gatherings using public information from users’ news feeds.

The challenge for police in using social media to fight crime is ensuring that they legally gather the information and don’t infringe on the rights of citizens.

However, using social media to take down criminals is just the tip of the iceberg when it comes to current trends in law enforcement — trends affecting the skills future police officers will need to develop to adapt to these changes.

More municipalities are rolling out next-generation digital communication technologies (DCTs), such as the U.S. Department of Transportation’s Next Generation 911 (NG911) network and the First Responder Network Authority (FirstNet) network.

The NG911 initiative’s goal is to enhance legacy 911 systems to make it easier for people to contact emergency services call centers via their mobile devices or laptop/desktop computers using voice, text messages, and even videos. Currently, most of these call centers in the United States use analog technologies and are not equipped to handle such communications.

With NG911, dispatchers can transfer calls between call centers, enabling people to get the help they need as quickly as possible while providing police agencies with more and better information to help them solve crimes and save lives.

Administered by the federal government, FirstNet is a broadband system solely for first responders. This system enables them to communicate and share information via their mobile devices without worrying that phone lines will be tied up during emergencies.

While these advancements will help law enforcement agencies and other first responders better handle emergencies and protect their communities, these technologies may present some challenges for current and future police officers.

For example, law enforcement agencies may need to provide extensive training to help officers learn to use new technologies properly. Department leaders also must ensure that new systems operate correctly, do not disrupt policing abilities, and allow for collaboration with police units in different jurisdictions.

To help address these issues, law enforcement agencies should take the steps necessary to ensure that their officers understand these advanced systems and are comfortable using them in the field. They can also work to make sure certain backup measures exist in the event that the technology doesn’t operate as intended, and that different police stations or departments can still work in conjunction with each other, even if they don’t have the same technology in place.

The Opioid Epidemic and New Standards of Care for Policing

In 2017, approximately 49,000 people died from opioid-related overdoses — particularly synthetic opioids — up from about 42,000 in 2016, according to the U.S. Drug Enforcement Administration.

Typically the first to respond to overdose scenes, police officers witness firsthand the devastating effects of addiction to synthetic opioids, such as fentanyl, which is 50 times stronger than heroin. First responders who accidentally come into contact with fentanyl are also at risk of becoming seriously ill.

As a result, law enforcement agencies are collaborating with healthcare workers, legislators, and public health agencies to develop new standards of care that future police officers can follow to better handle the opioid crisis. It’s no longer enough for police to just track down where the opioids are coming from; they also have to help their communities deal with addiction.

Following a Johns Hopkins University’s Bloomberg School of Public Health conference in 2018, a set of standard of care procedures is being reinforced nationwide. Among those procedures, the most notable include directions for police departments to:

Courses offered in an online bachelor’s in criminal justice curriculum often teach skills that future police officers could use when assisting people who are addicted to opioids and other narcotics. Examples of such skills include thinking under pressure as well as listening and empathizing.

Increasingly, police officers are being asked to do more work with fewer resources. As such, law enforcement agencies are turning to evidence-based policing to lessen the burden on their officers.

Evidence-based policing emphasizes how research may help future police officers do their jobs better and therefore better serve their communities. For example, evidence-based policing could mean analyzing the data pertaining to the results of certain police interactions with community members to determine better ways to handle similar situations.

This approach stresses using crime analysis in everyday police work. Gleaning insights from crime data, police can more effectively address crime and the other issues they face in their neighborhoods.

Explore the Benefits of a Criminal Justice Curriculum

From social media to data analysis, future police officers will have access to a number of new tools to solve and prevent crimes. Building a strong educational foundation can help you prepare to seek a range of exciting, ever-evolving roles in law enforcement. Learn more about how Maryville University’s online Bachelor of Arts in Criminal Justice program provides opportunities for you to learn about the key concepts and challenges in 21st-century law enforcement.

CNN, “These States Have Been Hit the Hardest by America’s Opioid Epidemic”

Deloitte, “The Future of Policing”

Pew Research Center, “Behind the Badge”

PoliceOne.com, “Five Issues PDs Must Address to Harness the Potential of NG911 and FirstNet”

PoliceOne.com, “Thinking Outside the Box: Police Use of Social Media to Catch Criminals”

The American Society of Evidence-Based Policing, What Is EBP?