Since its debut in the 1980s, esports has drawn increasing numbers of players and spectators. In 1980, the first official esports tournament took place in Los Angeles, when 10,000 gamers faced off in Atari’s Space Invaders Championship. Today, millions of people around the globe watch esports games.

Modern technology allows gamers and streamers to play or watch from anywhere with an internet connection. With millions of viewers interested in watching the very best at their games, professional esports athletes — Olof “olofmeister” Kajbjer Gustafsson, Ian “Crimsix” Porter, and others — draw huge crowds and sizable cash prizes. Members of teams like FaZe Clan, with more than 80 members and $10 million in tournament winnings, and Team Liquid, whose 60 members have won $38 million, have become celebrities in their own right.

The business of esports goes far beyond athletes. With professional gaming emerging as a thriving industry, opportunities in sales, marketing, analytics, and other business management areas mean there are many different ways to be involved.

Esports professionals — athletes and otherwise — are involved in many different types of esports. 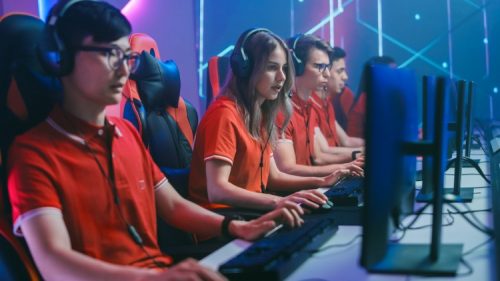 What Are the Different Types of Esports?

Any game in which players virtually compete in an organized competition qualifies as an esport. As long as a metric for performance exists, virtually any game can be used. Esports athletes compete in activities either as individuals or as part of a team.

These are the main types of esports games used in tournaments:

Racing games put esports athletes in the driver’s seat, competing against one or more drivers at the same time. Racing games can be realistic simulations, arcade-style games that use unrealistic vehicles, or a combination of the two. Some of the popular titles in racing games include Mario Kart, Need for Speed, and iRacing.

Sports games are based on professional sports such as football, basketball, baseball, and soccer. Players compete against each other in their favorite sports in either a realistic or an arcade version of the game. The Madden football series remains one of the top games for esports competitors, with Madden Bowl 22 awarding $1 million in prizes.

Digital card games use a turn-based format in which players attack, cast spells, and perform other actions using cards. Hearthstone, which was originally released in 2014, remains one of the most popular digital card games in esports today.

First-person shooter (FPS) games are defined by a first-person point-of-view camera of the character being controlled. The character usually wields a firearm or other weapon of some type. FPS games can pit the player against other human players (player-versus-player [PVP] style) or against the game’s artificial intelligence (AI). Some popular FPS games are Halo, Call of Duty, and Team Fortress.

Third-person shooter (TPS) games use a camera angle that allows players to see their entire character, as opposed to just their weapon. One of the biggest TPS titles in esports is Fortnite Battle Royale.

Multiplayer online battle arena (MOBA) games pit two teams against each other in a predetermined area or battlefield. Each character has a set of abilities that they may improve upon as they progress through the battle and collect power-ups. Popular examples of MOBA games are League of Legends, Dota 2, and Battlerite.

How Are Esports Played?

People can play esports as an individuals or as a members of a team in tournament-style play. Tournaments can be held in person, with players connected via a local area network (LAN), or remotely, with players competing across high-speed internet connections.

Each tournament features different types of esports games, based on a game’s popularity and audience size. Tournaments have their own formats for seeding and elimination that include the following:

Winners of these tournaments typically walk away with bragging rights, a trophy, and a large cash prize. For example, the annual prize pool money for Dota 2 is estimated to be around $47 million.

Esports as a Business

With advances in technology and increasing public interest, esports has become an industry along the lines of the NFL or NBA. Insider Intelligence forecasts there will be approximately 29.6 million esports viewers in 2022. That’s an 11.5% increase from 2021, and the trend is expected to continue.

Additionally, experts are projecting that esports will surpass $1 billion in global revenue for the first time in 2022. North America is expected to account for $300 million of that revenue.

Similar to professional athletes, esports teams are able to secure endorsement deals that increase their overall market value. According to Forbes, the top team in esports gaming in 2020 was valued at $410 million.

Considerable career opportunities are available — aside from participating as an athlete — for those interested in areas such as sales, marketing, and data analytics. Some popular positions are:

The popularity of esports is expected to keep rising. While the players may be the stars of the show, many young professionals are discovering that the gaming industry is ripe with opportunity in sales, management, marketing, and analytics.

If working in esports appeals to you, a positive first step is to invest in your education. Learn more about Maryville University’s online Bachelor of Science in Rawlings Sport Business Management program, which can help equip you with the skills, knowledge, and industry insight for a career in esports. Courses in business communications, financial accounting, and principles of marketing, as well as other core courses, help students develop a solid business foundation, while courses in sport finance and sport business data analytics address the specific demands of sports and esports.

Begin your journey to a career in sports business management today with Maryville University.

Evolution of the Esports Industry: An Inside Look at This Booming Sports Field

How to Join Esports: A Look Into Collegiate Esports

CDW, A History of Esports

Denial Esports, What Are eSports Tournaments?

Discover Esports, What Are the Game Types?

Forbes, “The Most Valuable Esports Companies 2020”

For The Win, 7 Biggest Esports Games by Prize Money in 2021

Game Designing, Meet the Best Gamers in the World

Market Business News, What Are eSports? Definition and Examples

Overtake, Everything You Need to Know About Esports Racing

Ready Esports, “What Esports Jobs Are Available Other Than Gaming?”