Cryptocurrency for Accounting: Keeping up with the Future

Consider these cryptocurrency accounting examples: A certified public accountant (CPA) is filing a client’s taxes and must accurately account for cryptocurrency valuations — how does the CPA determine if a holding is a tangible or an intangible asset? An auditor is validating a corporation’s financial statements — does the auditor understand the digital ledger? A bookkeeper has to reconcile bank statements and the general ledger — has the client kept proper records of buy and sell prices? The rise of cryptocurrency brings a new layer of complexity to accounting.

The founding of Bitcoin, the first cryptocurrency, is shrouded in mystery. Computer cryptographer Satoshi Nakamoto coinvented the currency, and then disappeared three years later. No one knows who Nakamoto is — a man, a woman, or a group — but Bitcoin established the principles that all cryptocurrencies are based on today.

Exactly what is cryptocurrency? If it can be invested in or used to buy stuff, then why doesn’t it behave like money? Here’s how it works. 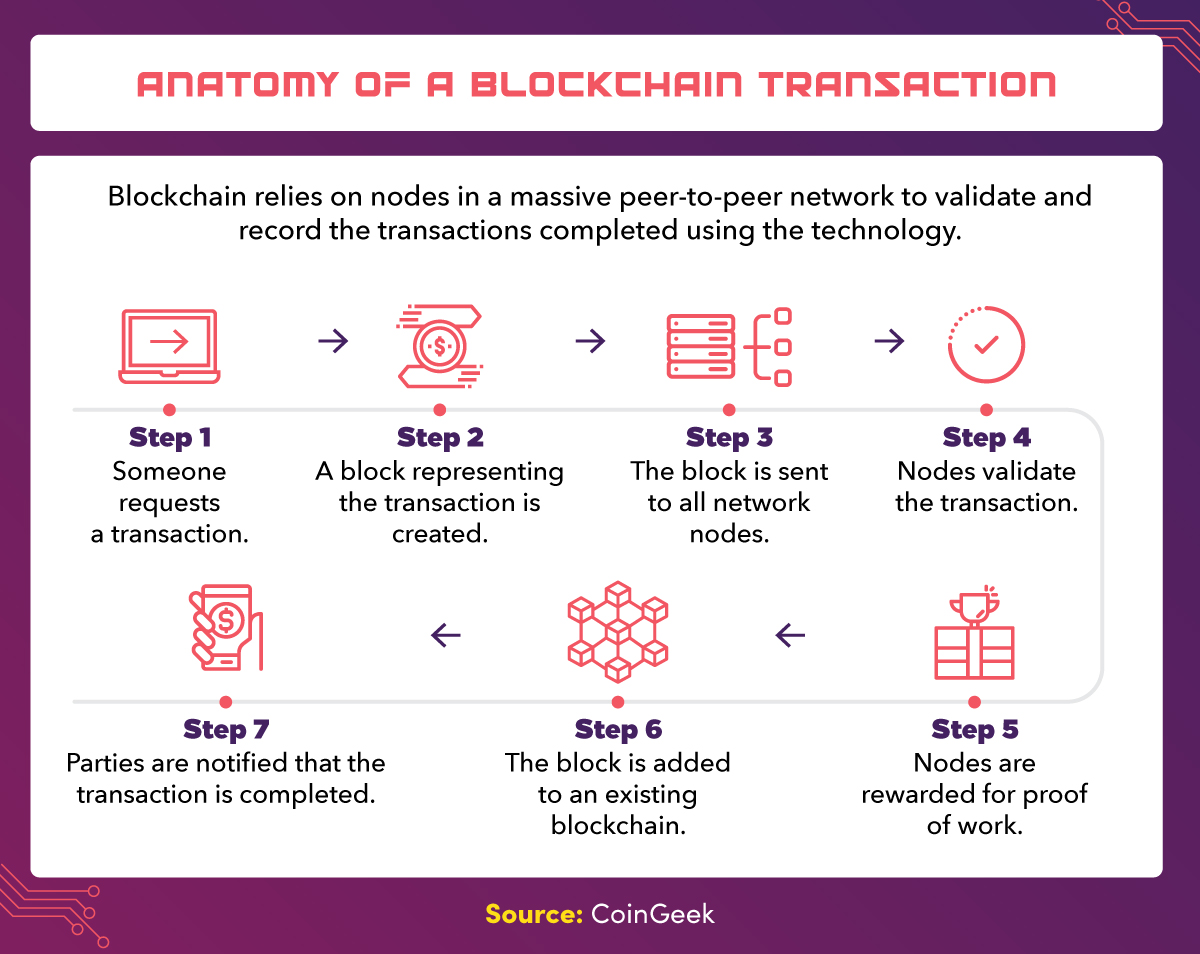 As cryptocurrency gains acceptance among users, governments that haven’t banned digital currency are looking for ways to regulate it. Although the appeal of cryptocurrency is precisely that it bypasses regulation, that lack of policing contributes to a wildly volatile market value, scams, and other illegal activity. The following are some of the concerns regarding cryptocurrencies:

The Federal Trade Commission (FTC) warns investors about cryptocurrency. In particular, cryptocurrency holdings lack U.S. government backing and protections against mismanagement and theft. The sheer number of cryptocurrencies can also lead to scams and fraud. Investors are responsible for identifying which initial coin offerings (ICOs) are legitimate, with no recourse if they get it wrong.

Investors need nerves of steel to stay in the volatile cryptocurrency market. Some of the reasons for this volatility are:

Hacks and other losses

Despite the safeguards of blockchain, cryptocurrencies can still be hacked. Investors can lose their entire investment by forgetting a password or losing a laptop. A transaction mistake means that money is gone forever, never to be retrieved. In two high-profile cases, cryptocurrency investors Gerald Cotton and Mircea Popesco died unexpectedly, leaving behind digital wallets, but no passwords.

Despite all the risks, many industries are looking at distributed ledger and blockchain technology and have identified applications. Healthcare, government, and insurance, for example, have been investigating ways to put blockchain to work to increase security, save money, and automate transactions in a safe and private way, making cryptocurrency accounting knowledge all the more valuable.

Blockchain technology keeps healthcare and personal data secure, protecting patients’ personal information and healthcare data. It can be used to verify and authenticate participants, and it can identify use patterns that can prevent unauthorized access. However, since a feature of blockchain is that transactions can’t be reversed, the healthcare industry will have to be thoughtful about how it incorporates blockchain into its operations.

Blockchain can be used to keep voting data secure and relieve concerns over voting fraud. By ensuring that voters’ choices can’t be reversed or altered, blockchain secures election integrity. While few governments currently use blockchain to secure their voting systems, the concept has its proponents.

Advocates also see a place for blockchain technology in other government operations. Blockchain can secure records, such as birth certificates and Social Security numbers. It can be used in intergovernmental transfers, validating and securing transactions. It can also potentially restore citizens’ faith in government by keeping data safe.

Blockchain has applications in the insurance industry. Besides securing health records, it can be used to detect and prevent fraud. It can be used in digitally signed contracts: smart contracts can that be signed digitally and computer automated, making compliance simple and automatic.

The rapid evolution of cryptocurrency

Nakamoto laid the groundwork for Bitcoin and blockchain in 2008, with a white paper laying out the theory and practice behind the world’s first cryptocurrency. In 2014, Bitcoin developers made changes to the blockchain protocols.

This break, called a “fork,” is common in the cryptocurrency sphere, and it often results in an entirely new currency. Bitcoin cash, Bitcoin gold, and Bitcoin XT are all the products of forks.

Developers create new cryptocurrencies all the time, usually to take advantage of a different blockchain protocol, improve on an existing technology, or create a cryptoasset that does something even more cutting edge. This rapid evolution means that some cryptocurrencies are launched to great fanfare, but burn out just as spectacularly. 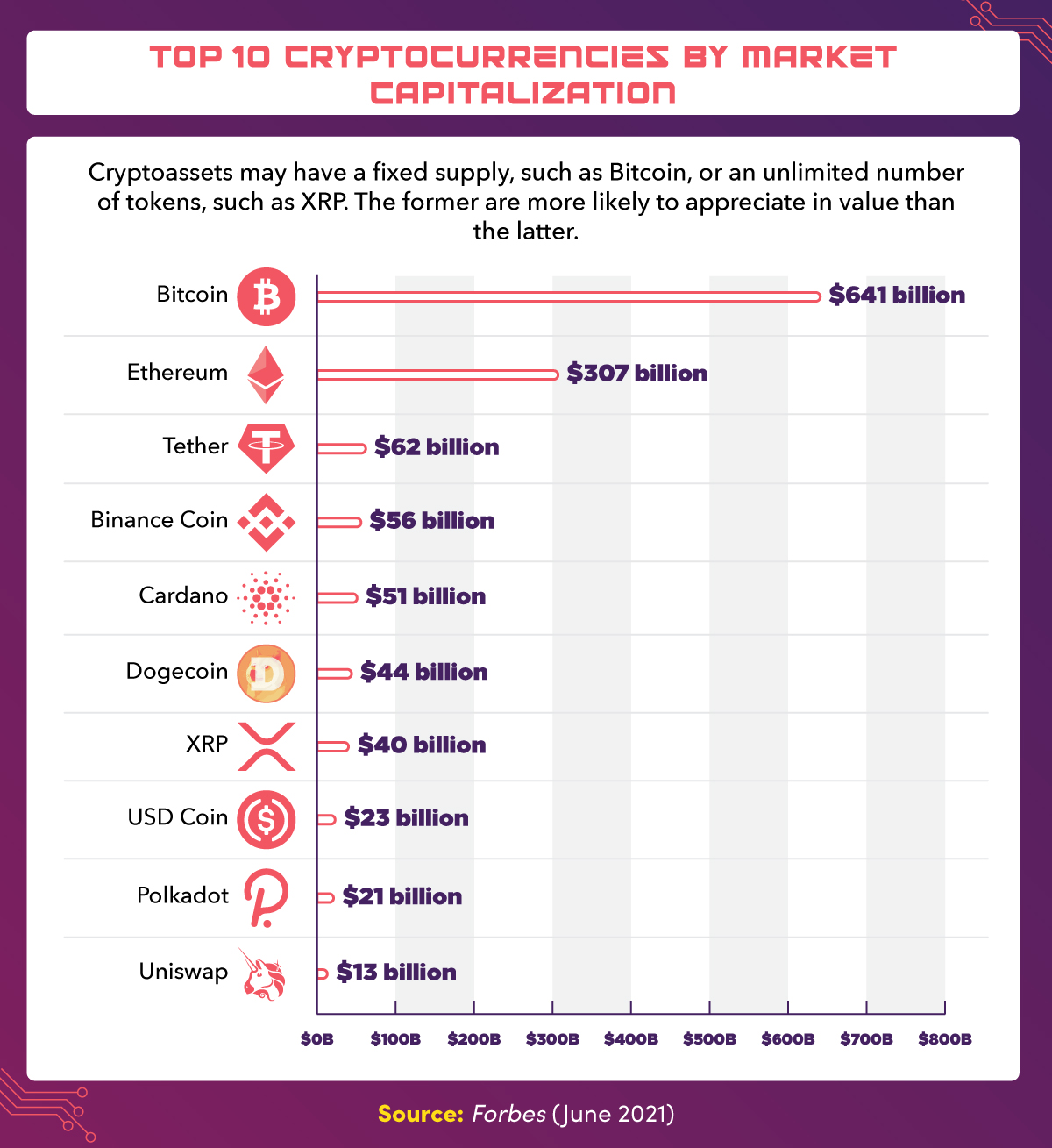 Some of the best-known cryptocurrencies besides Bitcoin are as follows:

The Ethereum white paper was published in 2013. Ethereum has forked multiple times in its history, leading to Ethereum 2.0. As one of the earliest altcoins, Ethereum has some  For instance, Ethereum’s blockchain stores computer code for financial contracts, unlike Bitcoin’s platform. Ethereum also provides the additional capability of producing smart contracts, or self-executing agreements.

Binance Coin (BNB) started in 2017 with 100 million BNB tokens and regularly buys back and “burns” BNBs, keeping the supply of coins finite and their value high.

Polkadot is an example of the way new coins are founded to solve shortcomings in the previous generations of cryptocurrencies. This currency promises cross-platform interoperability and no forks. Features include the ability to connect multiple blockchains, increasing transaction processing capacity.

Ripple Labs created XRP for its global transaction platforms. The Ripple platform can transfer fiat currencies and intangible assets, such as air miles, as well as digital XRP currency. In this case, the value lies in the ability of the Ripple network to quickly transfer assets around the world.

Founded in 2018 on the Ethereum blockchain, Uniswap is open source and completely decentralized and uses an automated liquidity protocol, which allows trades to happen instantly.

Litecoin was launched in 2011. It was based on Bitcoin’s source code, making it one of the earliest successors to Bitcoin’s splashy introduction. It’s often considered a less-expensive investment than Bitcoin.

Theta was launched in 2018 to solve a problem in video streaming networks: lack of bandwidth. Theta’s blockchain rewards users who contribute their excess bandwidth and computing resources to deliver video with Theta tokens.

The explosion of the cryptocurrency market has caused any number of challenges for accountants and bookkeepers. Accountants have had to reckon with an entirely different asset class that doesn’t act anything like a currency or commodity. The industry has had to adapt its processes and compliance protocols to accommodate this new asset and all its variations.

The first step is to identify exactly what the elements of cryptocurrency are. 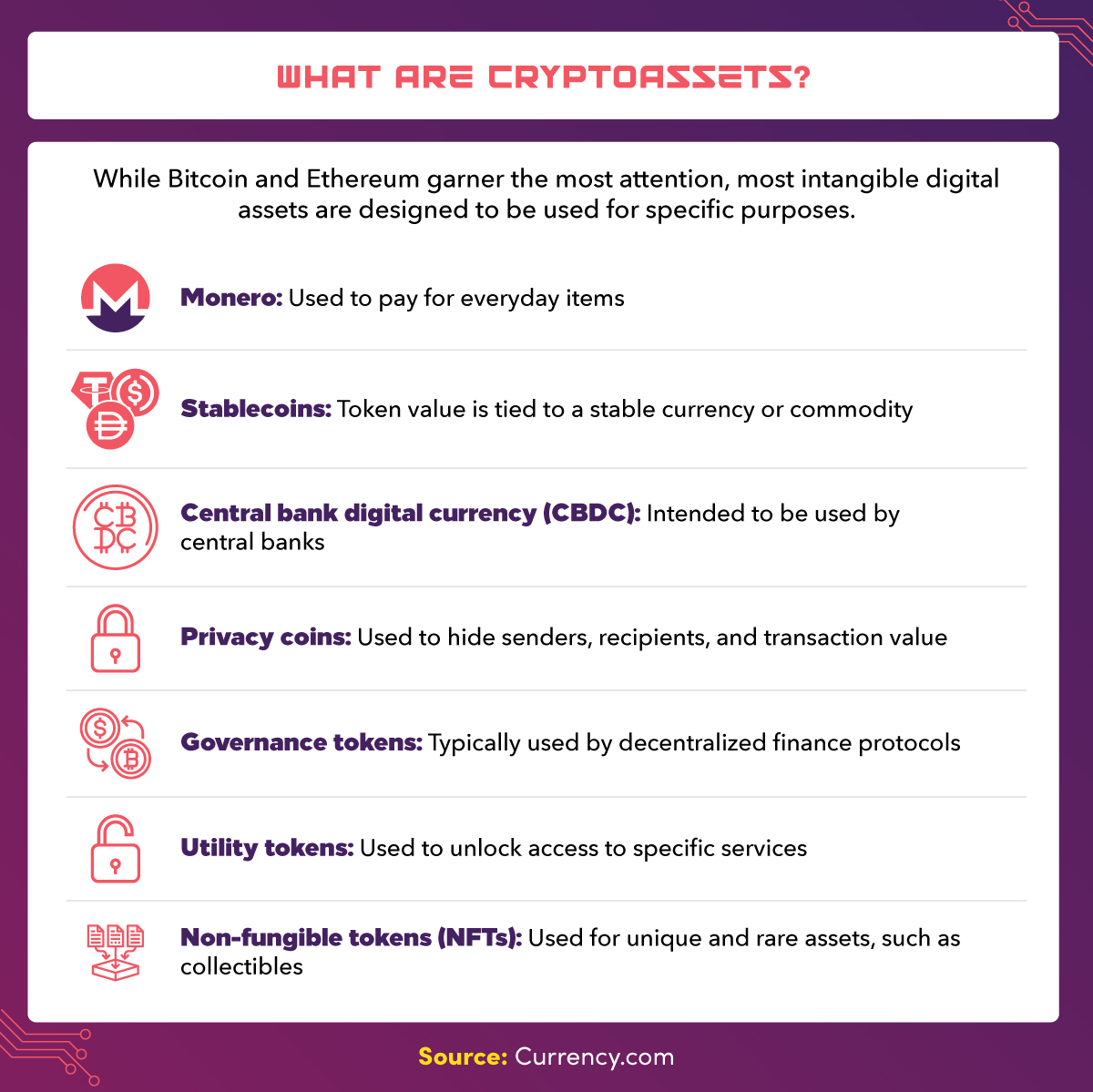 While Bitcoin and Ethereum garner the most attention, most intangible digital assets are designed to be used for specific purposes. Here are some examples from Currency.com. Monero: Used to pay for everyday items. Stablecoins: Token value is tied to a stable currency or commodity. Central Bank Digital Currency (CBDC): Intended to be used by central banks. Privacy coins: They hide senders, recipients, and transaction value. Governance tokens: Typically used by decentralized finance protocols. Utility tokens: Used to unlock access to specific services. Non-fungible tokens: Used for unique and rare assets, such as collectibles.

What are intangible assets?

Cryptoassets are digital currencies or related tokens, based on a decentralized platform, secured by encryption, and counted on a digital ledger. They’re mostly unregulated, but that’s changing as governments establish rules for them. Sometimes accountants treat them as intangible assets and other times as tangible assets.

Accounting for Bitcoin and other cryptoassets

For tax accounting and because governing bodies have yet to establish regulations, accountants need to choose a valuation strategy for cryptoassets. Investors should keep meticulous records, because tax is based on fair market value of the crypto at the time of acquisition and when the asset is spent.

Cryptocurrency bookkeeping: How is it different?

The following challenges can trip up the bookkeeping process:

The future of cryptocurrency accounting

As world governments establish cryptocurrency regulations, the technology stands on the precipice of change. Some countries continue to crack down on digital currencies; the U.S., while not banning cryptocurrencies, sees them as competition for its own digital currency. Since cryptoassets are esoteric and intangible, they have a psychological barrier to overcome. If you can’t spend it, is it real money?

The following are examples of how cryptocurrency will change accounting and accountants’ relationships with their clients:

Regulations will lead to new accounting standards from the IFRS. These rules could acknowledge the different types of cryptocurrencies and how they should be treated differently according to GAAP. Ultimately, these changes will impact the work accountants do and how they serve their clients. This can help lead to the following:

Some experts see rules as a path toward the cryptocurrency market’s maturity, making it more attractive to investors. Government regulations will eliminate much of the volatility of the cryptoasset class. Clear guidelines will help investors properly report their crypto gains and could encourage conservative investors to enter the market.

As regulations allay concerns from large banks and individual investors, this esoteric asset class will go mainstream. Investors can be assured that they won’t lose their investment to a crypto bubble. They can invest without the transaction fees most trades require. They can be confident in the security of assets based on blockchain technology, and they may have improved access to credit.

The accounting industry has been shifting away from compliance to consulting over the past several years, in part due to increasing automation. CPAs, accountants, and auditors will find new opportunities to serve their clients with expert advice about cryptocurrency and blockchain.

According to the International Federation of Accounting (IFAC), blockchain technology will change the way accountants and auditors conduct their work. Blockchain eliminates the need to enter accounting data into different ledgers, and it validates each transaction. Auditors will still need to bring their expertise to the table.

Crypto and blockchain technology is going to revolutionize the accounting industry. That’s why those entering the accounting profession need to understand the cryptocurrency market.

This asset class is going mainstream sooner rather than later. It has multiple advantages over many other assets due to the power of blockchain technology. It has security advantages over fiat currency in that transactions are private and safe. Pending regulations should help smooth out price volatility and make new investors more confident in buying and holding cryptos as part of a well-rounded portfolio.

If your goal as an accountant is to become a trusted adviser to your clients, then you should keep abreast of developments in this dynamic, unpredictable, and potentially rewarding field. Cryptocurrency and blockchain are the future of accounting.

CoinGeek, “Blockchain Basics: Key Things to Know as a Beginner”