Get Program Details
What degree level are you interested in pursuing?
Next Step We value your privacy.
Back to Faculty 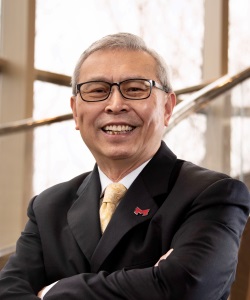 As the chief digital transformation evangelist at Maryville University in St. Louis, Feng Hou is committed to preparing students for the technological advancements of the future. He carries with him more than 20 years of digital transformation and executive leadership experience and spearheads multiple blockchain initiatives in higher education. At Maryville, Hou leads the university’s implementation of blockchain technology to enhance the student experience both on campus and online, transforming Maryville into The First Blockchain University.

Hou’s credentials within blockchain include his reelection as the founding chair of the blockchain Education Architecture Special Interest Group (EASIG) under the Linux Foundation; he currently serves as the Vertical Chair of Education at Blockchain Chamber of Commerce. He is also the co-founder and CEO of Pistis.io Inc, which is a blockchain platform service. Hou is an award-winning CIO and a nationally sought-after speaker who did the keynote addresses at the Blockchain in Education conference in Washington, D.C., and Interface St. Louis in 2019, presented and led a blockchain workshop at the Alliance 2022 conference, and spoke at Blockchain in Oil & Gas in 2021. He was also invited by the National Science Foundation (NSF) as a Blockchain in Education workshop speaker and co-leader to present at the conference and is the co-author of Adaptive Lifelong Learning for an Inclusive Knowledge Economy.

In addition to his leadership role, Hou teaches graduate-level courses at Maryville University and is also leading the development of an undergraduate course on blockchain.