Get Program Details
Which degree program are you most interested in?
Next Step We value your privacy.

In our rapidly changing healthcare system, the line between doctors and nurses continues to blur. As nurse practitioners (NPs) play a larger role in delivering patient care, the day-to-day responsibilities of doctors and NPs are beginning to look increasingly similar. For students who are thinking about a career in healthcare, the question of which path to take — nurse practitioner or doctor — can be confusing. To clear up some of the confusion, here is an outline that provides some helpful information. You will learn what doctors and nurse practitioners do, along with some key differences and some reasons you might consider one path over the other. 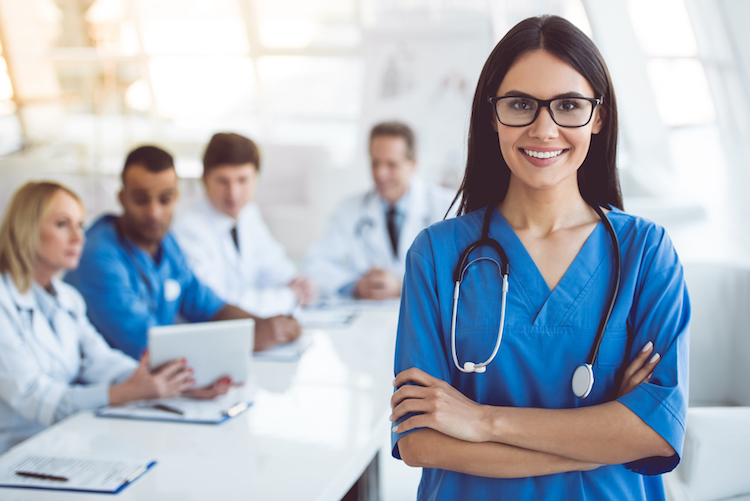 Average salary: Primary care physicians earn a median salary of $251,578, according to the Bureau of Labor Statistics (BLS).

Nurse Practitioner vs Doctor: The Similarities

Nurse Practitioner vs Doctor: The Differences

It’s clear that something must change if we are to meet our population’s healthcare needs. Even if more people embark on the path to becoming doctors, they wouldn’t enter the workforce soon enough to alleviate today’s pressing needs because of the 11-15 years of education required to become a physician.

Experts say the practical solution is to move toward a system that allows nurse practitioners to provide more of our nation’s primary care. Nurse practitioners are already performing most of the same day-to-day duties as primary care doctors. And now, recognizing their potential to fill this healthcare gap, the system is changing to allow NPs to practice independently without requiring a doctor’s supervision. As of August 2017, 23 states have granted full practice authority to nurse practitioners, meaning they can open their own clinics without a doctor’s oversight. Regulations are in the works for many more states to allow full practice authority.

Since today’s nurses require only two to three years of additional training to become nurse practitioners, they can enter the workforce much more quickly and start making an impact in the immediate future. And once they enter the workforce, they likely will have plentiful opportunities in the job market. Thanks to the pressing demand of our nation’s healthcare system, nurse practitioner jobs are projected to increase by 36 percent, or 56,000 jobs, by 2026.

Students who are interested in pursuing healthcare careers, and are eager to make an impact where they’re needed most, may want to consider a nurse practitioner career. Most people pursue healthcare careers because they want to help people, despite the challenges involved. Right now, nurse practitioners have the opportunity to help in a fundamental way. They can have an immediate impact by making a difference in their patients’ lives, and they can affect the healthcare system on a macro level by helping meet our nation’s growing healthcare needs.

Now that you have a greater understanding of the nurse practitioner versus doctor debate, find out more about what a DNP program involves.

American Nurses Association – Difficult Professional Choices: Deciding Between the PhD and the DNP in Nursing

Men’s Health – Is It Okay if Your Doctor’s Visit Doesn’t Include a Doctor?

NY Times – The Gulf Between Doctors and Nurse Practitioners

Learn more about the online DNP program.
Get Program Details