Get Program Details
Are you currently a licensed RN in the U.S.?
Next Step We value your privacy.

The evolution of nursing, and its positive image, was sparked in the 19th century with Florence Nightingale. Her contribution to contemporary nursing began in 1854 when she led a corps of nurses to tend to sick and fallen British soldiers during the Crimean War. Since then, the nursing profession has evolved and has played an essential role in transforming society.

In investigating the evolution of nursing, seeing how nursing has changed over time and discussing key figures in the history of nursing are essential. Additionally, looking at developments in nursing and identifying trends can help provide a glimpse into the future of nursing.

Today, nurses have a broader range of practice options. They can work in various specializations and focus areas, such as ambulatory care, cardiac care, and emergency rooms, or as certified nurse-midwives (CNMs) or family nurse practitioners (FNPs). Nurses also have various responsibilities, from educating patients on self-care practices to prescribing and administering medications.

The evolution of nursing from a smaller-scope profession to a field with many specialties is primarily a result of improved nursing practice education. Each nursing area requires different skills, so no matter where nurses are in their careers, they can opt to advance their education to expand their skill sets and practice knowledge. 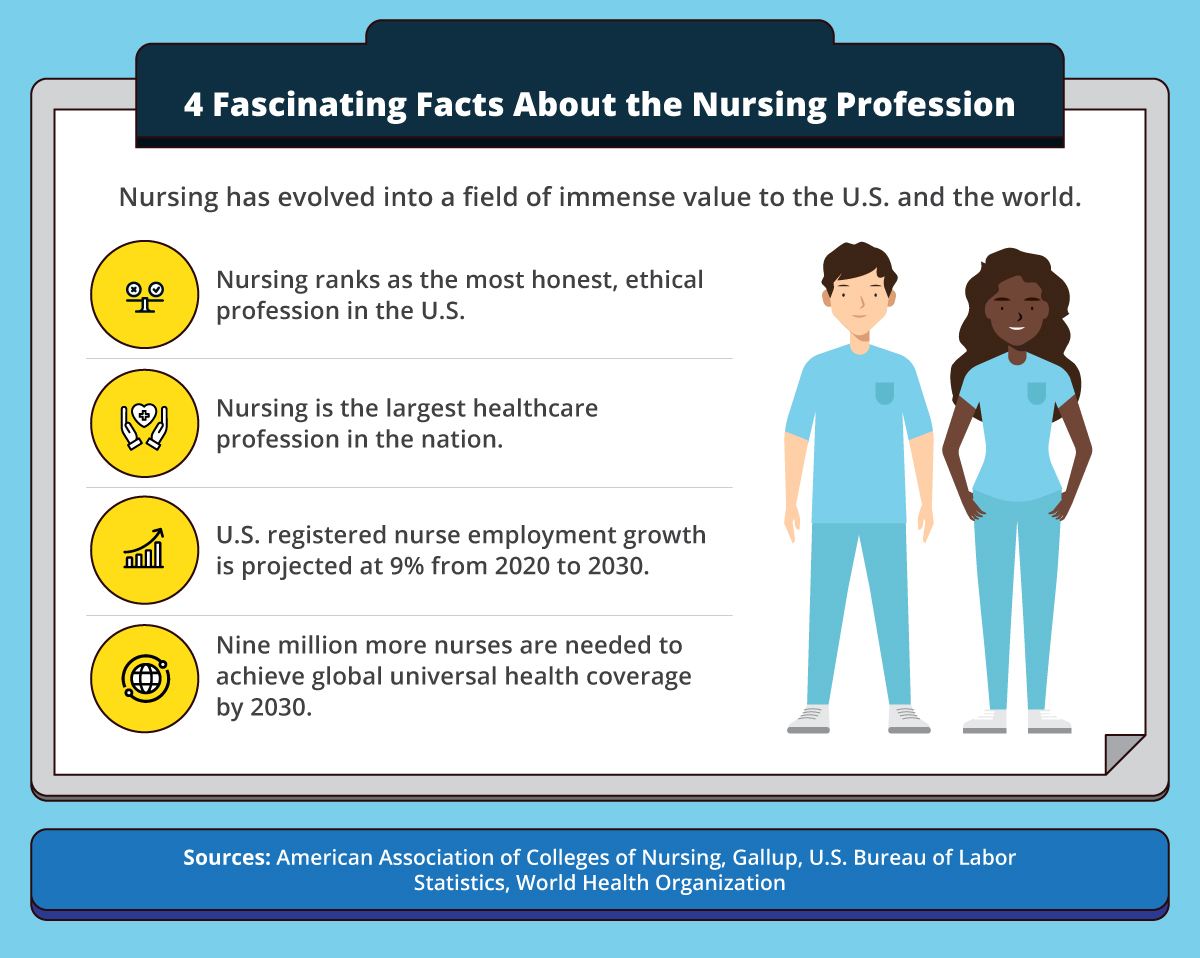 Nursing has evolved into a field of immense value to the U.S. and the world. Fascinating facts about the nursing profession include the following: Nursing ranks as the most honest, ethical profession in the U.S. Nursing is the largest healthcare profession in the nation. U.S. registered nurse employment growth is projected at 9% from 2020 to 2030. Nine million more nurses are needed to achieve global universal health coverage by 2030.

Historical documents point to the origin of professional nursing at around A.D. 300, during the Roman Empire. But the evolution of nursing into a modern profession occurred centuries later amid a war-torn Europe. These are key highlights in the history of nursing:

Women such as Nightingale, traditionally recognized as the founder of modern nursing, greatly influenced nursing. Following her leadership role during the Crimean War, Nightingale would open the first nursing school in London in 1860.

Over the centuries, many women have contributed to the evolution of nursing. One of the hidden figures of nursing history is famed abolitionist Sojourner Truth. She went from being a live-in nurse as a slave for the Dumont family to an appointee at Freedman’s Hospital, providing nursing care for patients. Throughout her life, Truth advocated for nursing education.

The history of women in nursing includes contributions from the following historical figures: 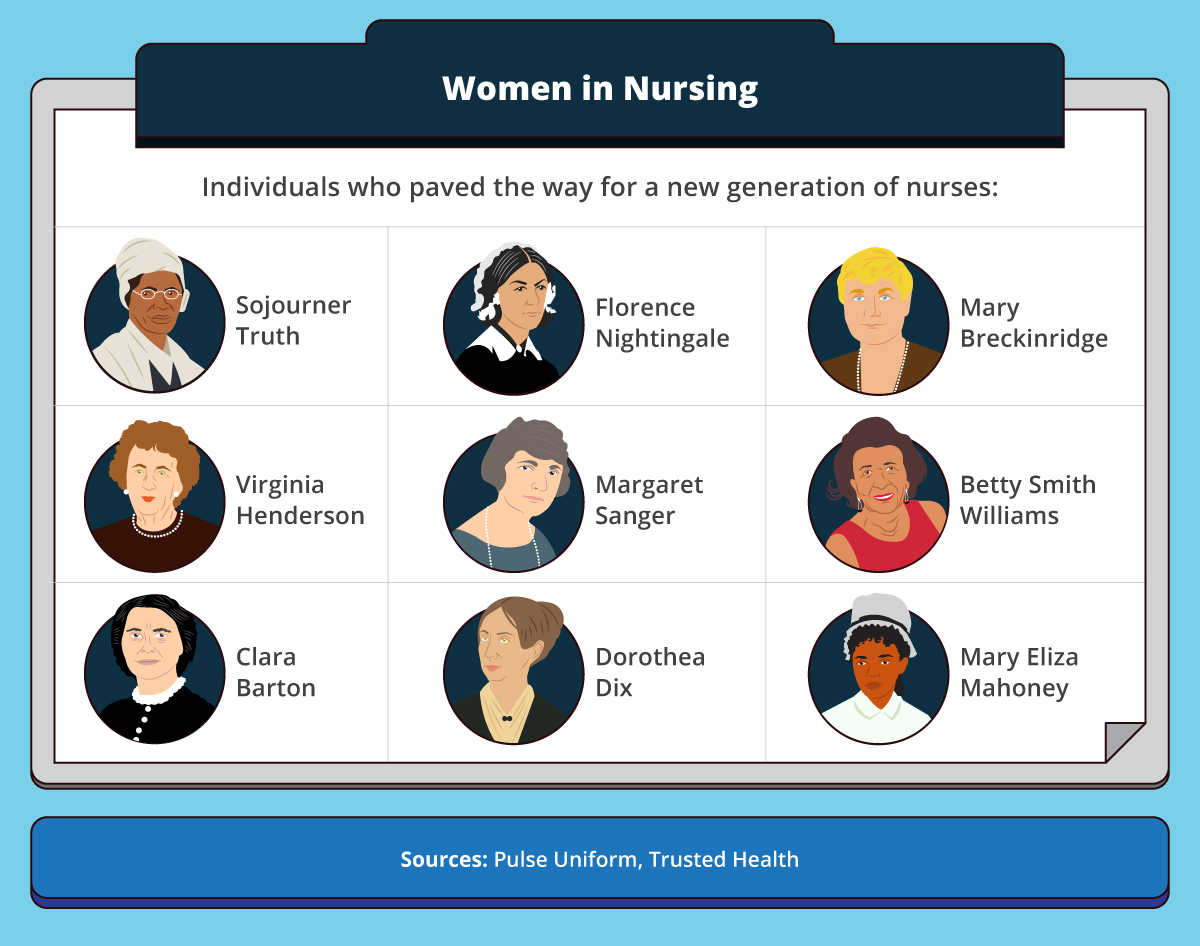 Women Nursing in the Civil War

During the American Civil War, the evolution of nursing continued. For example, before the war, women typically provided care to sick family members privately. In the first few months of the war, it became clear that women were needed to support the war effort. Male nurses on the battlefield were soldiers themselves, and as a result, many became casualties of the conflict, limiting nursing resources.

An estimated 620,000 soldiers died during the Civil War, many due to wound-related disease and infection. Soldiers needed care for the wounds, and women volunteered. During the war, women took more prominent public nursing roles, creating opportunities and inspiration for women in nursing careers after the war.

Women in nursing in the Civil War influenced the beginning of nursing as a profession after the war, including establishing standards of care and schools to promote nursing as a career further. Two prominent figures who advanced nursing during this time were:

How Has Nursing Changed Over Time?

Nursing has changed over time, especially in the areas of nursing practice and education. For example, nurses have a broad range of choices for practice options and specializations. A nurse can choose a nurse practitioner (NP) track and acquire the clinical knowledge and essential skills to perform similar activities as doctors, including prescribing medicines in states with full practice authority. Common activities that nurses perform in their jobs include the following:

Nurse responsibilities have expanded over time with the heightened importance of patient safety and advanced-nursing practice, which applies science and technology to improve healthcare delivery.

Depending on specialty and type of practice, nurse responsibilities are wide-ranging. Here are examples of nurse specialties:

Providing nurses with an evidence-based framework to maximize health outcomes is an important aspect of the evolution of nursing and can be traced back to Nightingale. She documented how deplorable hospital conditions affected soldiers recovering from disease and battle wounds and how hot water and soap helped improve patient care.

Evidence-based practice began appearing in literature in the mid-1990s, but the nursing community didn’t embrace it until the 2000s. In nursing, it’s a systematic approach that integrates clinical expertise with scientific knowledge to improve practice and patient outcomes. For example, a primary tenet in evidence-based practice implementation in nursing includes meeting a patient’s needs and weighing each patient’s experiences and preferences.

Resources on Nursing Changes Over Time

Learn more about the evolution of nursing practice and the different nurse specialties available today in the following resources:

Nursing has grown in complexity since its inception. New developments in nursing, such as the increased use of technology (telehealth, automated equipment, EHRs), have become essential components in care delivery. Additionally, a more diverse nursing workforce helps elevate cultural awareness and empowers nurses to better provide care to people with varied backgrounds.

As the aging population continues to expand and amid the sudden shifts in healthcare that COVID-19 has caused, patient care will become more complex. These developments create opportunities to address these challenges. Here’s a list of major developments in nursing: 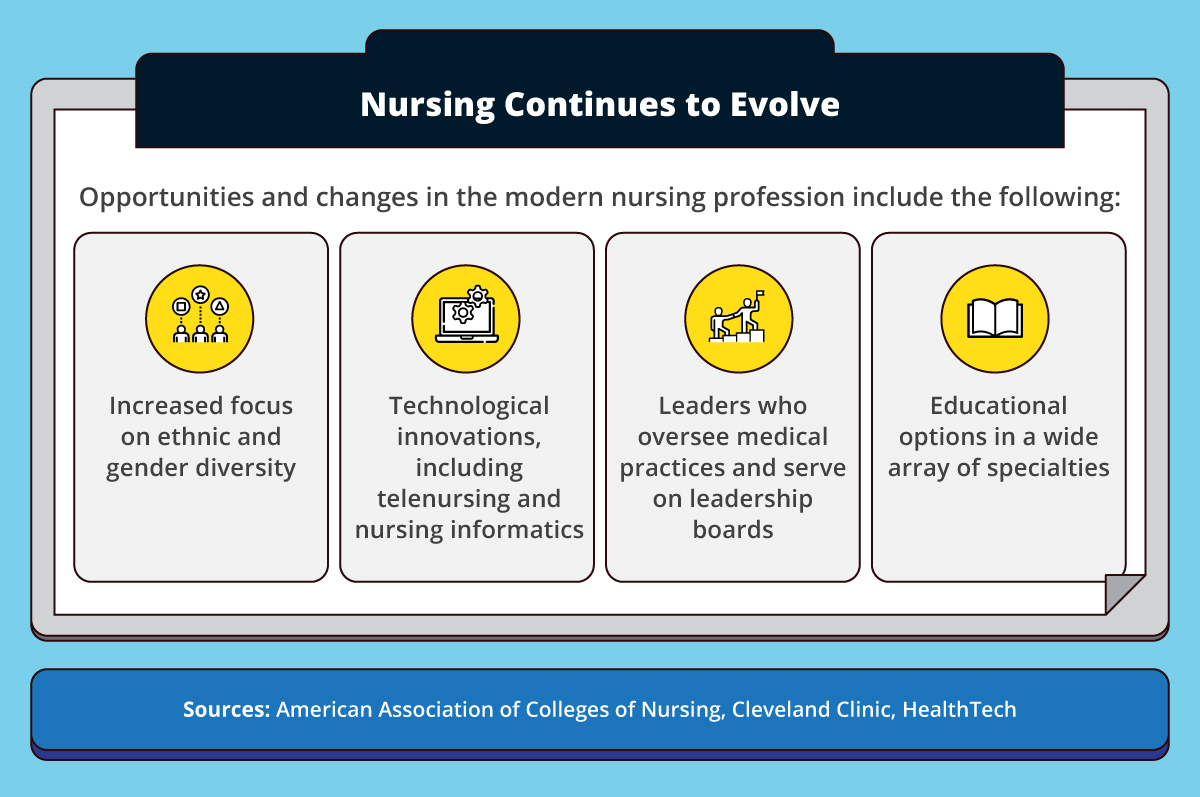 Opportunities and changes in the modern nursing profession include increased focus on ethnic and gender diversity; technological innovations, including telenursing and nursing informatics; leaders who oversee medical practices and serve on leadership boards; and educational options in a wide array of specialties.

Resources on Developments in Nursing

For a glimpse of new developments in the evolution of nursing and how they may impact the future of healthcare, the following resources offer some insights:

The U.S. Bureau of Labor Statistics (BLS) reports that 3,080,100 individuals were employed as registered nurses (RNs) in 2020. In terms of job outlook, the future of nursing careers looks promising. The field is expected to grow by 9% from 2020 to 2030, adding about 276,800 new positions, according to the BLS. Due to this growth and other factors such as nurse retirements and career changes, the BLS projects 194,500 RN job openings per year over the period.

The International Council of Nurses reports that there will be a need for up to 13 million more nurses worldwide by 2030. Burnout, retirement, and other factors create challenges in retaining nurses. However, this is also creating job opportunities for new nurses and NPs to help fill the nursing gap.

Additionally, a growing demand exists for nurses with bachelor’s or higher degrees to fill high-level leadership roles. These levels of education provide the clinical preparation and knowledge for nurses to help address challenges in the healthcare industry, including helping alleviate the need and fill the gap of primary care physicians.

In fact, many patients go to FNPs as their primary healthcare providers. In some states, FNPs can even start their own practices. As the need for primary care providers grows, there will be an increased need for nurse leaders who can deliver care and leadership.

Evolve in Your Nursing Career

The work of nurses is critical for the evolution of healthcare systems as many take on increasing responsibility while staying true to their primary purpose: providing high-quality care.

From providing acute care in hospitals to promoting the health of individuals, families, and communities through education, advice, and counseling, the evolution of nursing in modern society has helped advance the U.S. healthcare system and improve the lives of millions of people.

Nursing in modern society also benefits the employment sector. According to a fact sheet from the American Association of Colleges of Nursing (AACN), the nursing profession is the largest in the U.S. healthcare industry, with continued growth and leadership opportunities in the field.

A graduate education is recommended for individuals who want to expand their clinical practice skills and pursue their leadership and goals — for example, becoming NPs. NPs can prescribe medicines, which only medical doctors could do in the past, and launch a primary care practice, thanks to the clinical and leadership knowledge they acquire from an advanced nursing education.

Cleveland Clinic, “The Evolution of Nurses as Leaders of Patient Care”

HealthTech, “The Impact of Technology in Nursing: Easing Day-to-Day Duties”

World Health Organization, Year of the Nurse and the Midwife 2020