A nurse practitioner’s (NP) job opportunities vary depending on state laws, according to the National Institute of Health Care Reform (NIHCR). Some states give NPs the authority to practice on their own, without physician oversight, and to prescribe a greater number of medications. Others require NPs to join physician-led practices and restrict their prescribing authority to certain classes of medications. If you want the best opportunities to join the NP workforce, consider seeking employment in one of the following six states. 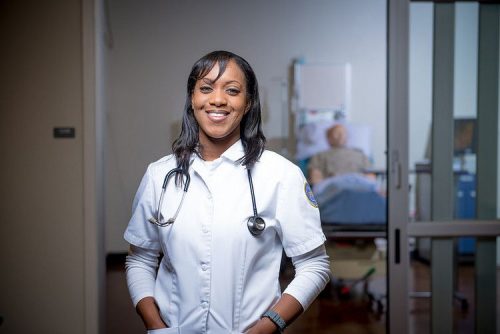 Indiana
U.S. News & World Report notes that Bloomington and Columbus, Indiana, host some of the highest-paid NPs in the country; $126,470 and $146,920 per year, respectively. They also note that the upper level of NPs in the United States earn $126,250 per year, while the median salary falls at $92,670. To maximize your income potential, consider larger cities in Indiana for the increased salary averages.

Washington
According to a Stateline report in Kaiser Health News, Washington State was one of the first states to give NPs wider licensing authority. As early as the 1980s, the state recognized the need for more primary care practices to compensate for doctor shortages. To help combat this shortage, Washington gives NPs the opportunity to use a greater range of their expertise and training to treat patients. NPs who want to get the most out of their nursing education may want to consider states that give them greater license to practice.

Minnesota
According to a joint survey by Workplace Dynamics and the (Minneapolis, Minnesota) Star Tribune, Minnesota ranks first in the country for its positive workplace environment. Based on the NIHCR’s findings that NPs occasionally receive negative feedback from physicians and health care administrators, many NPs might benefit from working in a state with such a positive work environment, and where health care professionals work in collaborative and supportive situations.

Alaska
In the 1980s, Alaska joined Washington in giving nurse practitioners greater opportunities in terms of their scope of practice, according to Stateline. Alaska gives NPs full autonomy to open and run their own practices, which can provide them with better income potential and greater job satisfaction. While Alaskan NPs can continue to work with physicians, these professionals can also function alone, providing greater career opportunities.

Texas
Texarkana, Texas is one city that offers NPs higher salaries, according to U.S. News and World Report’s salary outlook. Additionally, the U.S. Bureau of Labor Statistics reports that NPs in Texas enjoy a mean salary of $102,070. Although Texas does not grant full autonomy to NPs, according to Stateline, nurse practitioners can work in concert with physicians to treat patients in all types of clinical settings.

Georgia
According to Indeed, the salaries for NPs in Georgia are 14 percent higher than the national average. The salary potential in Georgia varies based on the types of practices that NPs join. For example, according to Indeed, neonatal NPs command the highest salaries at an average of $120,000 per year, while family practice NPs earn about $74,000. Other NP areas of practice that command high salaries in Georgia include behavioral health and geriatrics/gerontology.

Choosing where to live and work as an NP requires careful examination of the factors that are most important to you. Consider the type of practice you want to open or join, the salary expectations for that group, and the level of professional autonomy you want in the workplace.