The Evolution of the Nurse-Doctor Relationship

Unlike the nurses of the 18th and early 19th centuries, many of today’s nursing professionals consult on diagnoses, prescribe medication, treat medical conditions, and counsel patients. As a result, the dynamic between nurses and doctors continues to evolve.

From Deference to Partnership

Since the 18th century, the nursing profession’s focus has shifted from servitude to educated care. The Nursing Times describes that the Florence Nightingale view has given way to an understanding that nurses contribute to all aspects of health care and do not exist merely to serve physicians.

The Nursing Times reports that, historically, women held nursing roles while men served as physicians, and nurses were expected to defer to doctors regarding patient care. The publication also suggests that as more women became physicians themselves, specifically during the women’s liberation movement of the 1960s, the dynamic between doctors and nurses changed.

Nurse Satisfaction On the Job

Educational institutions and hospital administrations have gradually given nurses more responsibility in health care. In many work environments, the assumption no longer persists that nurses should follow doctors’ leads in all matters, never questioning their authority or offering opinions of their own.

In 2013, a doctor-nurse behavior survey covered by Becker’s Hospital Review revealed that 65 percent of surveyed nurses rated their teamwork with physicians positively, although only 51 percent felt they worked well with physician assistants. Of the 30 percent of nurses who feel bullied at work, only 5 percent identified physicians as contributing to their feelings. According to the survey, nurses feel more bullied by senior management and fellow nurses than by doctors.

When asked to rate the teamwork they experience with pharmacists, 70 percent of responding registered nurses answered excellent or good. Overall, this suggests that nurses have come to feel that they represent valued members of the health care community. 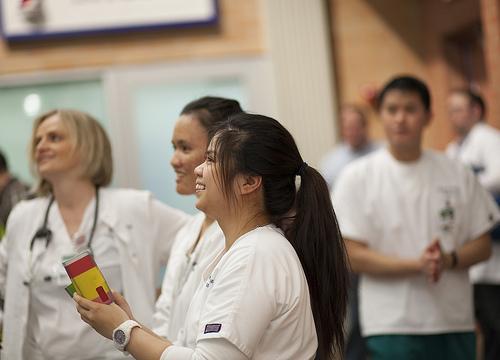 In the early 1900s, nurses received little education compared to today, according to the Nursing Times. Today’s professionals pursue advanced nursing degrees that prepare them for every aspect of health care, from patient care to administrative tasks. In fact, a growing number of prospective nurses become nurse-practitioners (NPs). MedPage Today’s KevinMD.com reports that NPs can prescribe prescriptions, see patients, and perform other duties traditionally reserved for physicians [depending on the state in which they practice].

Nurses, Doctors, and the Future

It is evident that nurses and nurse practitioners remain as critical to patients’ welfare as those of physicians. As a result, nurses and doctors can work together harmoniously in many health care institutions. While workplace disagreements may cause occasional friction, as in all industries, the majority of nurses and physicians seem to recognize one another’s contributions to the health care field and to exhibit mutual respect in all interactions.