As the United States’ population grows and changes and the nation’s healthcare needs continually evolve, the healthcare industry has progressed in response. Discover how rates of nursing student diversity have increased in recent years, and learn how this trend could impact the future of the nursing profession.

A recent report led by the American Association of Colleges of Nursing (AACN) shows that racial and gender diversity in the nursing profession have already increased significantly in the 21st century.

In fact, according to the AACN’s report 2018-2019 Enrollment and Graduations in Baccalaureate and Graduate Programs in Nursing, “nursing students from minority backgrounds represented 34.2% of students in entry-level baccalaureate programs, 34.7% of master’s students, 33.0% of students in research-focused doctoral programs, and 34.6% of Doctor of Nursing Practice (DNP) students.” 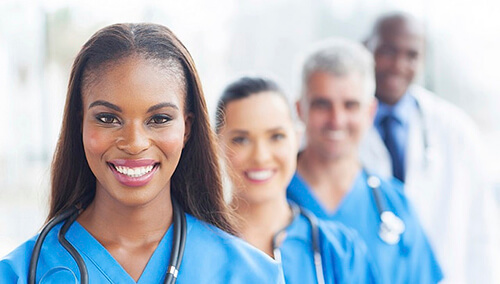 Nationwide, several key states stand out for having high percentages of diversity in nursing students. In California, New Mexico, and Hawaii, for example, more than 50% of nursing students are considered diverse. In states like Wyoming, Vermont, and Maine, however, diversity is much less apparent, with diverse nursing students making up less than 10% of the total body.

As the AACN report shows, white nursing students continue to make up more the majority of enrollees, while about one-third of students have backgrounds considered more diverse at all program levels. Still, this doesn’t mean every minority group has high representation. Among DNP enrollees, for example, about 17% are African American, while just 8% are Asian or Pacific Islander, and about 7% are Latino. Less than 1% of students are Native American, while about 2% are multiracial.

Across the nation, however, one distinct group continues to experience inadequate representation in the nursing student body. Though men constitute nearly 50% of the population in the United States, they made up just 12% of baccalaureate and graduate nursing students in 2019.

The Nursing Profession Is Poised for Significant Change

For those who track the development of the healthcare industry, it may come as no surprise that diversity is on the rise among nursing students. In fact, two key factors have prompted the nursing profession to prepare for substantial change.

As Modern Healthcare explains, the nursing profession needs to replenish its workforce rapidly, as many senior nurses are quickly approaching retirement age. This means that entry- and mid-level nurses are preparing to take on positions with greater responsibility, and roles at all levels are opening up at increased rates.

According to the Bureau of Labor Statistics, more than two million jobs for registered nurses are projected to open from 2018 to 2028, between new jobs being created and currently existing jobs becoming available. With so many new nurses starting down this career path, the face of the nursing profession could change significantly.

At the same time, the makeup of the U.S. is undergoing rapid change. As a report by Janice M. Phillips and Beverly Malone states, projections indicate that the U.S. will become a majority-minority nation by 2043. By 2060, projections show that both the Hispanic and Asian populations in the U.S. will represent double the figures from 2012. The nursing profession may reflect this substantial shift in demographics, but only with concerted efforts on the part of academic and industry leaders.

Students From Varied Backgrounds May Lead to Diverse Faculty

As demographics shift and the profession changes, so must the makeup of nursing faculty. The National Advisory Council on Nurse Education and Practice (NACNEP) reports that the current makeup of nursing faculty tends to be relatively homogeneous. As the profession grows and faculty shortages increase, however, industry leaders have identified an even greater need for faculty members from diverse backgrounds.

How Student Diversity Can Contribute to Health Equity

Healthcare experts recognize that the need for a more diverse nursing profession extends beyond career opportunities alone. When people from a wider variety of backgrounds become nurses, they bring greater cultural understanding and awareness to the profession.

According to the NACNEP, this can help achieve health equity throughout the U.S. in several ways. For instance, nurses from racial and ethnic minority groups tend to be more likely to practice in underserved or rural areas. They may also provide patients with better access to healthcare services, education, and information, due to their ability to understand patients’ cultural norms and communicate in patients’ native languages.

How Academic Programs Can Ensure Future Diversity in Nursing

Even though the nursing profession has experienced a steady increase in diversity over the past five years, industry leaders recognize that they must take steps to help spur this growth.

As the AACN explains, nursing education policymakers have already proposed several courses of action. Perhaps most importantly, they intend to present a more inclusive image of the profession. By doing this, they can more effectively promote the idea that professionals from all backgrounds can become nurses and pursue successful, rewarding careers.

Effective student outreach is also essential, and many baccalaureate, master’s, and BSN to DNP online programs intend to enhance their efforts to reach out to more diverse student groups. This may include actively recruiting members of underrepresented student groups in various stages of their educational pursuits, such as through pipeline programs as early as middle or high school.

Efforts to increase diversity should not end when students enroll in programs, however. As the AACN explains, education administrators must also strive to support potential students through the application process as well as mentor them throughout their educational careers. Without these essential efforts, students from diverse backgrounds may abandon their nursing studies for programs with better support and more infrastructure.

A wider range of students are exploring careers in nursing. With effective graduate education and top-notch experiences, students from diverse backgrounds may have more opportunities than ever before to make a difference in the nursing profession.